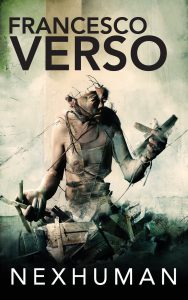 Frankenstein meets classic cyberpunk in this remarkable work of contemporary Italian science fiction. In Nexhuman, Verso offers us a vision of the near-future in which the world is dominated by "kipple" (a term he borrows from Philip K. Dick's Do Androids Dream of Electric Sheep?)—that is, the trash generated by mass consumerism on an unimaginable scale. From this literal trash heap, though, comes a man so consumed by love for an artificial body with the uploaded consciousness of a human woman that he will stop at nothing to piece her back together after she is torn apart by a ruthless gang. Questions of identity, love, human evolution, the nature of consciousness, environmental degradation, and reality itself merge in this book to create a terrifying yet plausible portrait of what our world might yet become.

It is Verso's ability to juggle so many fundamental issues of the day and weave them together into a coherent narrative that impresses me the most about Nexhuman. Indeed, one could make a case that this book is ultimately about family, or love, or overcoming the limits of human biology, or waste and mass consumerism. This novel is about all of these things, and why not, since together they give us a potential portrait of life on Earth. Peter Payne, the central character, is at the heart of this nexus; at various points in the novel growing up in a dysfunctional family, dealing with a prosthetic leg and arm, working as a "trashformer" for a major recycling corporation, and ultimately trying for fifteen years to put back together (literally) the woman he loves—a nexhuman named Alba who was ripped apart by Peter's own brother and his gang. We follow Peter from traumatized childhood into cynical adulthood as he tracks down the pieces of Alba's body: one gang member took her torso, another her legs, and his own brother, Charlie, took her pelvis. Alba's violent dismemberment is driven by an irrational hatred of the embodiment of the next stage in human evolution, and is even more heinous for the ongoing sexual assault that her body parts are subject to. Charlie's gang declares that creatures like Alba are nothing more than "kipple," even as they use them to gratify base human urges.

Thus we see a community grappling with what it means to be human when a most basic component—organic matter—is no longer necessary. Not surprisingly, humans start arguing about whether or not nexhumans have rights: in Peter's world, they "are still not recognized as 'living beings,' eligible for fundamental personal rights." But does this mean, then, that the mind isn't the seat of individual identity? Why would the transfer of human consciousness from an organic vessel into an artificial one, then, change how we perceive this new "person"? But then, as one of Peter's friends and fellow trashformers asks, how is this transfer different, ultimately, from traditional reproduction?: "Conception doesn't transfer us into another person, but creates another being growing up from its parents' genes. In the same way an upload creates a new being, except for the first time in the course of evolution, it also produces a detachment from organic matter." And then there's the issue of uploading a consciousness without the original human's knowledge, or the problem of multiple transfers of one consciousness—does each transfer mean a "new" individual?

Had Verso told this story from the perspective of a nexhuman, the result would have been fascinating, but that would also have been a completely different story (ahh this is getting too meta!). And yet, Peter is a perfect narrator because he himself walks the line between organic and artificial. Having been nearly torn apart by a massive trashforming machine when he was a kid, Peter ultimately acquires state-of-the-art prosthetic limbs from his time combing through his local kipple heap. No one knows trash better than Peter, who claims at one point, "[t]ell me what you throw away, and I'll tell you what you are." In fact, Peter believes that people have become intertwined with kipple—they buy products, use them, discard them, and buy new ones that may have been made from the very material of the discarded products. It's recycling taken to its most evil extreme, a process by which technology could have been used to efficiently repurpose objects, but which has instead turned into an invitation to consume even more, leading to kipple fields that are too massive to ever be fully recycled.

Throughout his years working in these fields, first as a kid trying to salvage anything profitable and then as a trashformer for the recycling company, Peter dreams of putting back together the nexhuman Alba with whom he fell in love before she was dismembered. The only "person" who ever showed Peter real affection, Alba had led a quiet life working at a travel agency, running into Peter once in a while and treating him like a beloved younger brother. Having salvaged Alba's head immediately after the attack, Peter holds on to it in the hopes that if he places it back on a whole body, the Alba he knew will come back to life and perhaps love him back. Unlike Frankenstein's monster (who is feared because of his horrifying appearance), Alba stands for beauty, kindness, and perfection; and yet, as a nexhuman, she is still perceived as a threat by other humans. Peter understands this, even while he doesn't agree with it, which leads to one of the most lyrical statements in the entire novel:

They do not belong to the same species as us. Nexhumans are like the sarcophagi and totems of the past; in carrying our souls into the future like those ancient vehicles carried our spirits into the afterlife, I see in them a similar attempt to imprint ourselves on the continuum of eternity, a mark of our desire to last forever.

The question that this all comes down to is: what price are we willing to pay to live forever? Some scientists have suggested that the human lifespan might indeed be capped at around 117; the deterioration of the body and brain are just too great at that point for anyone to go on living. What's the alternative, then? Nexhuman imagines what might happen if we decide to simply ditch our flesh-and-blood bodies and upload into longer-lasting vessels. Think about that Star Trek: TNG episode in which a brilliant scientist manages to upload his consciousness into Data's positronic net. The same dilemmas are raised (and, of course, not answered).

In many small instances, however, Verso asks us to consider where the line can really be drawn between human and nexhuman. Is Peter fully human even if he has two artificial limbs? I think most of us would agree that that's a ridiculous question and of course Peter is still human. But what about when he loses his other limbs? What if his body is replaced piece by piece—wouldn't he ultimately become a nexhuman by default? And what about the visors that some humans, including Peter, wear to read RFID chips (everything in this world is chipped, by the way) and thus learn about the histories of each object? Is that just an enhancement on the way to artificial augmentation? For Peter, the ability to upload one's consciousness into a new body is freeing, not terrifying. As he muses near the end of the book, "[i]f I had the certainty that this were only a game I'd take more risk—one life is not enough to discover who we really are." The transfer of consciousness, then, is not the erasure of the human but the chance for what was once human to explore the realm of pure consciousness in a way that was impossible through organic matter.

I don't say this about many books, but I wish that Nexhuman had been even longer so that Verso could have explored in greater detail all of these (in my opinion) fascinating and important questions about the future of the human race. As it stands, though, Nexhuman is a masterpiece by a talented Italian writer, and I look forward to whatever he writes next.

Like Loading...
© Copyright 2017 By: Rachel Cordasco
About Rachel Cordasco
Rachel Cordasco has a PhD in literary studies and currently works as a developmental editor. When she's not at her day job or chasing three kids, she's writing reviews and translating Italian speculative fiction. She runs the website sfintranslation.com, and can be found on Facebook and Twitter.
No comments yet. Be the first!