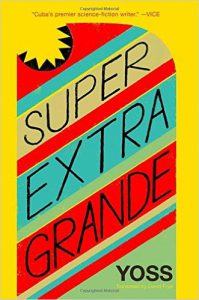 Jan Amos Sangan Dongo is one of the first documented sufferers of the "Gonzalez Syndrome," a "term for the excessive growth experienced by some humans after spending long periods in weightlessness as children and teenagers” (p. 96). A misfit because of his inordinate size, he finally finds his home among other such misfits. Jan becomes the "Veterinarian to the Giants," the "only veterinarian biologist or animal doctor in the whole galaxy, human or alien, who specializes in extremely large organisms" (p. 42). Accompanied by his trusty assistant, Narbuk, a member of the Laggoru species who is congenitally incapable of telling a joke or keeping a secret, Jan traverses the Galaxy in human time through the "Gonzalez Drive," earning his pay by tackling problems involving very large species, such as swallowed jewels or medical issues. Living during the peak period of galactic exploration, work is never in short supply. Jan has treated constipation among the genetically cloned dinosaurs of the planet Jurassia and contaminated gills among the titan leeches of Swampia, and has successfully retrieved a bracelet from the innards of the eighteen-hundred-metre long Tsunami of Nerea. However, there is one gaping hole in Jan’s CV: he has never been called upon to deal with the Laketons of Brobdignag, the largest known species of the Galaxy.

But Jan’s chance finally comes in the form of an SOS from the Galactic Coordinating Committee, the fractious oversight body for interspecies disputes. A Laketon of Brobdignag has "swallowed" a spaceship that ventured too close to the surface of the planet, and Jan is the only person in the Galaxy who can—literally—plumb the depths of the Laketon to rescue the trapped human and Cetian inside. But as a tense debriefing unfolds, Jan realizes that this is far more than a search-and-rescue mission: he is called upon not merely to save two lives, but to save an unstable, inter-species Galactic equilibrium that risks exploding into a destructive war.

Super Extra Grande has all the elements of a classic space opera: interstellar travel, futuristic technology, (interspecies) political intrigue, and an intricate, complex crisis that can only be solved by an individual act of derring-do that cuts the Gordian knot. For all that, it also has a combination of features that makes it unique. To start with, all the characters talk in Spanglish, a hybrid of Spanish and English. This is an interesting authorial choice. The book was originally written in Spanish, and, therefore, its characters' demotic might have created potential problems for a monolingual Spanish audience. In translation, the problem is reversed: now it is the non-Spanish-speaking English audience that must contend with dialogue, large swathes of which are in Spanish.

This might seem a formidable obstacle. Oddly, it is not. The linguistic similarity between Spanish and English means that quite a few of the Spanish words are familiar—and what remains can be filled in by the thickness of the context, and the reader’s own imagination. Of course, there are places—long monologues, for instance—where the eye glazes over, but this does not happen too often. On the other hand, the informality of this slangy, hybrid Spanglish lends a naturalness to the dialogue that more than compensates for the odd moment of incomprehension. It is a testament to Yoss’s talent that in a book in which half the dialogue is in another language, the reading pleasure is scarcely affected. It is also a very bold move: had it come a cropper, Yoss’s constituency would have shrunk to bilingual English-and-Spanish speakers. As it is, the novel remains an enjoyable read in David Frye's English translation and—I suspect—an equally enjoyable one in Spanish.

The second way in which Super Extra Grande is a different kind of space opera: the heart of the novel is a celebration not of technology, but of biology. Admittedly, the Gonzalez Drive and the Space Elevator are integral aspects of Super Extra Grande, and there’s a passage about Jan’s descent onto the surface of Brobdignag that could well have been written by Larry Niven or Arthur C. Clarke. However, these are brief interludes. Super Extra Grande begins with Jan’s foray into the bowels of a "Tsunami," and ends with another foray into the bowels of a "Laketon," and the painstaking detail with which Yoss describes the physiology of these creatures is normally reserved for world-building. Given that the book’s protagonist is a veterinary biologist, and animals are his world, that should perhaps not come as too great a surprise. However, that is not all. We are also treated to lengthy—and utterly hilarious—digressions about the physiology of the seven intelligent species of the galaxy, and in particular how they have sex. These passages—that could so easily become tedious in the hands of a lesser writer—are Yoss at his best: dryly humourous, fiendishly creative, wickedly irreverent:

The substance they secrete isn’t remotely similar in origin, consistency, or flavor to the milk of any terrestrial mammal, of course. It couldn’t be; the “nipples” are actually highly modified male reproductive organs, through which the male Cetians secrete huge amounts of semen—which contains, in addition to gametes, incredibly large doses of hormones and nutrients.

Before you ask: Yes, I’ve tasted the stuff. I don’t have any weird homophobic prejudices about it. It really is delicious, with a slightly bittersweet taste. And I didn’t feel like I was violating any moral taboo when I tried it. Did women in the past feel like they were transgressing when they tasted caviar? Or a simple fried egg?

But, true—it doesn’t take an especially perverse mind to come to the lascivious conclusion that Cetians reach maturity through oral sex. And they sure do enjoy it. (p. 138)

There is a deeper point here. One of the longstanding criticisms of the Space Opera subgenre has been its distinctly colonial overtones. Whether it is glorifying "exploration," or treating alien species as incomprehensibly different at best—and irreconcilable enemies at worst—there is a not entirely coincidental overlap between the founding myths of Western colonialism and the more popular examples of Space Opera (whether it is H. Beam Piper’s Uller Uprising [1952], or James Cameron’s Avatar [2009]). Contemporary novels—for instance, China Mieville’s Embassytown—have tackled this by simply stripping away the veneer of the exploration narrative from a First-Contact story. In Super Extra Grande, Yoss does it another way: he makes the other six intelligent species of the Galaxy so familiar and so intimate to the reader, that in her imagination they come to occupy the same stage as humans, and not merely a blur of objects in the background. Yoss avoids the mistake of doing this in a moralizing way; he opts, instead, for a wry and self-deprecatory tone, that is extremely effective—especially when he is talking about the relationship between humans and the other species. We are told, for instance, that Spanglish is the lingua franca of the Galaxy only because out of all the seven intelligent species, humans are the very worst with languages; and, in an almost offhand manner, we are told about the Galactic Coordinating Committee’s struggles in dealing with interspecies racism and xenophobia, which is at its peak among humans, because they are the one species that entered space-faring with the most pronounced differences among themselves.

In a recent interview, Yoss named the Strugatski Brothers among his favourite science fiction writers. There are some obvious similarities: both have run into trouble with censors, and both deploy humour as an integral part of their literary arsenal—perhaps out of necessity. And there is another deeper affinity: perhaps because of their position in societies that have valourised rational planning as a method of directing the community on the path of progress and happiness, both Yoss and the Strugatskis exhibit a lingering unease with this narrative. In the Strugatskis’ Roadside Picnic (1972) and Noon Universe novels, human attempts to harness both space and social evolution repeatedly come up short; and likewise, in Super Extra Grande, in a Galaxy teeming with intelligent species with complex physiological and psychological interior landscapes of their own, and featuring huge creatures that regularly throw spanners in finely laid plans, the limits of human imagination and capacity are reached fairly quickly. This is why, despite its exuberance and its joyous celebration of the adventures of the bumbling Jan, Super Extra Grande is also a subtle reminder of our little, brief authority in a vast universe.

Like Loading...
© Copyright 2016 By: Gautam Bhatia
About Gautam Bhatia
Gautam Bhatia is based in New Delhi, India. When not at his day job as a lawyer and legal academic, he tries to lay hands on the latest works of historical and speculative fiction—with a particular taste for high fantasy and Orwellian dystopias—and read them from cover to cover. He has reviewed before for the Jadaliyya Magazine, and blogs about books at anenduringromantic.
No comments yet. Be the first!