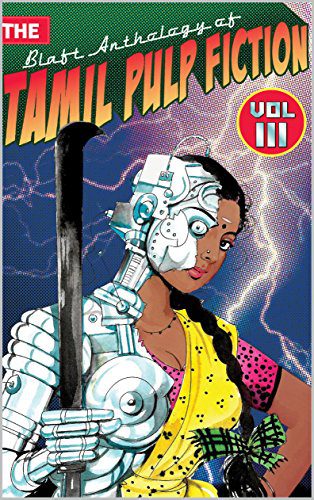 Tamil is wonderfully versatile, existing simultaneously as a language of high culture in India and as one of the major languages of popular Indian pulp fiction. Tamil pulp goes back two centuries, and is alive and well in the twenty-first, incorporating ancient legends into such genres as detective fiction, science fiction, horror, and more. Racy, absorbing, and fast-paced, these stories are designed to grab their readers and not let go until the final word. Like its western pulp counterparts in the early twentieth century, Tamil pulp has evolved over the years based on readers’ interests and shifting social norms.

Thanks to Blaft Publications (based in Chennai, India) and translators Pritham K. Chakravarthy (Volumes I & II), and Rashmi Ruth Devadasan, Rakesh Khanna, V. Vinod, and Nirmal Rajagopalan (Volume III), we now have three volumes full of some of the most popular Tamil pulp out there, with stories about mad scientists, murderous robots, drug dens, curses, exoplanets, and much more that stretch the bounds of the imagination. As Kaavya Asoka noted in her LARB review of the first two volumes, these stories include “the universally sumptuous fare of pulp but with a lip-smacking regional twist.” In each story of murder, revenge, love, betrayal, and the search for truth are references to Tamil legends, Tamil family names and terms of address, pop culture references, and clothing terms (each of which is explained in endnotes and a helpful glossary). As an American reader, I’m always grateful for these notes, which help me better understand the culture and history from which these stories have emerged.

And by the way, the covers are breathtaking.

Like the previous two volumes, this one brings together several works of Tamil pulp from a variety of genres: murder mystery, crime, horror, and science fiction. Thanks to the mini author biographies that preface each story, readers can gain some context for the tales that follow. Many of these authors are quite prolific and have worked in a variety of media. They’re expert storytellers, playing on the reader’s enjoyment of suspense, feelings of empathy, and desire always to root for the most interesting characters (be they “good guys/gals” or not-so-good ones).

Up first is Rajesh Kumar’s “White Rose, Black Cat,” a Poirot-esque tale full of twists and turns that cleverly leads the reader away from the real murderer, just like the detectives assigned to the case must go far afield before realizing that the culprit has always been right under their noses. When a young girl leaps over the compound wall surrounding the house of a public prosecutor, her serious injuries and the mystery surrounding her presence ignite a furious investigation into drug smuggling, toxic soil, and murder. Cutting back and forth between the investigation of a dying coconut grove and the complicated story of the fleeing girl, Kumar seems to bring the many strands together effortlessly, until all clues point directly back to a single perpetrator. (And no, I won’t tell you who. You have to go read it yourself). While this story is more detective fiction than SF, the strange murder and dying coconut grove take on, at various points, an almost supernatural quality—right up until everything is explained.

Like “White Rose, Black Cat,” “Shabash, Susheela!” (Pattukkottai Prabakar) is a detective story, but this time the murder hasn’t happened yet. When a self-professed psychic warns the Moonlight Detective Agency that a famous Hollywood actress will be targeted when she visits Chennai, it’s up to the detective duo Susheela and Bharath to unravel the mystery and save her. This story, though, includes a liberal helping of humor, with the two detectives trading barbs and snarky insults even as they bring their own expertise to the case. And while Bharath’s misogynistic comments and questions are enough to make your eyes roll into the back of your head (i.e. they’re so awful that they’re funny), they ultimately turn out to be a cover for Bharath’s investigative work, throwing all of the suspects off-balance. Susheela’s suspicious and incisive approach help the duo pare down the suspect pool until only a few are left. A deft trick is all that’s needed, then, to expose and capture the true murderous plotters.

Both “Shabash, Susheela!” and the sci-fi story “Operation Nova” (authored by Tamilmagan) include brief self-referential moments that jar the reader out of their fictional revery, inviting them to examine more closely the blurry boundary between fiction and reality. “Shabash, Susheela!” unsettles the reader in the very first sentence: “Due to repeated requests from a reader by the name of G. K. S. Moorthy, of Gobichettipalayam, Bharath was obliged to make his appearance in the very first chapter of the story for a change, and so entered the office of Moonlight Detective Agencies.” With a nod to readers of his earlier pocket novels that feature the two detectives , Prabakar essentially offers readers a place in his stories, and the chance to shape their outcomes. Like pulp fiction itself, this opening resists the assumption that stories exist outside of “real life.” Tamilmagan also disrupts this boundary but waits until the end of his story, including a reference to himself as a writer and the magazine he works for as if concluding a ghazal with the traditional final couplet that includes a reference to the poet him/herself. Thus “Operation Nova” can be read as straight-up science fiction up until the very end, when we’re asked to think of it too as a kind of poem that explores themes of melancholy, love, longing, and metaphysics.

The only work of science fiction included in this anthology, “Operation Nova” brilliantly weaves together Tamil legends and current scientific knowledge to create a densely-textured story about the will to power, the necessity of love, and the place of humans in the universe. Fearing the catastrophic eruption of a volcano ten years in the future, a group of scientists make plans to ferry a large chunk of the human and non-human populations of Earth to planet GL 581g, where they’ll create a new (and better?) civilization. This time, love and family ties will be taken out of the equation, which would presumably lead to the eradication in human society of war and economic and social inequality. The first several thousand people to be shipped off to the exoplanet are basically kidnapped, and wake up on a strange planet ruled over by a human brain-computer hybrid intelligence named “The Mother.” As the story unfolds and we learn more about some of the kidnapped people and their families and lovers, as well as the extermination of another alien species similarly interested in colonizing GL 581g, we realize that the plan has been nothing more than one scientist’s attempt to rule not one but two planets for material gain and the love of power. Tamilmagan freely draws on real politicians and actors for this story, giving lines to Barack Obama, Angelina Jolie, and Bill Gates, and several others. Criticism of the western political elite and domination of Earth by a small handful of nations invests “Operation Nova” with an immediacy and relevancy not always found in science fiction. It’s a remarkable story about the crucial role that love and trust play in every human relationship, whether humans are on Earth or millions of light years away.

Love as a powerful force also drives the plot of Subha’s “Look Out, Narendran!,” in which a terrorist (and electronics engineer) threatens to destroy the Taj Mahal (“the iconic monument to love”) unless work is stopped on a new railway line. As with the previous detective stories discussed in this review, “Look Out, Narendran!” quickly splits into two storylines, with parallel investigations going into who is making these threats and how to stop them. Once the detectives determine that the railway line is to be built over the grave of the terrorist’s late wife, who was herself killed by a train, it’s up to them to stop him from sending bombs hidden inside of dead, remote-controlled birds to destroy the Taj Mahal. It is only by imagining such a surreal, fantastic scenario as using these birds that the detectives are able to act quickly.

In “A Stream in the Desert” (Kanchana Jeyathilagar), the love between two siblings functions as the driving force to find out the truth about a tragic accident. This story, incidentally the only one by a female author included in this volume of the anthology, is more interested in human psychology and emotion than murder and revenge plots. Rather, “A Stream in the Desert” explores how far a sister will go to clear her brother’s name when he becomes an unknowing pawn in a stormy relationship. Ragini takes it upon herself to question those who knew her brother during his final days (since he had moved and then married a local girl unknown to Ragini and her father). Because of her grace, patience, and inner strength—sharply contrasted with her brother’s back-stabbing wife—Ragini is able to piece together what happened to her brother and learn which of his in-laws she can truly embrace as family. Along the way, she herself falls in love, and while the story gets a bit oversentimental at this point, the conclusion is ultimately uplifting.

Love and trust are also the interrelated themes of “The Top of the Game,” a crime story by Indra Soundar Rajan (best-known for his supernatural mystery stories that draw upon Hindu mythology and legend). A medical rep, tempted to enter the illegal drug trade, begins using his new-found wealth to remake himself, which alienates his girlfriend and makes his family suspicious. He must decide which path to take (drug smuggling or telling the truth to the authorities) and whether or not he wants to change into a person who is unrecognizable to the ones he loves.

A kaleidoscopic collection of the juiciest Tamil pulp fiction written over the past few decades, The Blaft Anthology Volume III will make you want Blaft Publications to keep the volumes coming.

Like Loading...
© Copyright 2017 By: Rachel Cordasco
About Rachel Cordasco
Rachel Cordasco has a PhD in literary studies and currently works as a developmental editor. When she's not at her day job or chasing three kids, she's writing reviews and translating Italian speculative fiction. She runs the website sfintranslation.com, and can be found on Facebook and Twitter.
3 comments on “The Blaft Anthology of Tamil Pulp Fiction Vol. III, selected and translated by Rashmi Ruth Devadasan, Rakesh Khanna, V. Vinod, and Nirmal Rajagopalan”

This is a very good review...detailed and enticing!