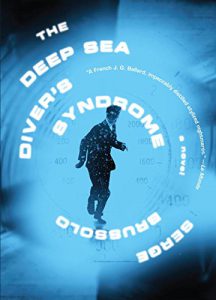 Originally published in French in 1992, The Deep Sea Diver's Syndrome is the first of Serge Brussolo's many books to appear in English. For the uninitiated Anglophone reader, then, it’s a single piece of a jigsaw that comes with no box or picture—a fleeting but intriguing sample of a bibliography that might spread off in any direction. The experience of reading the novel is something similar: an intense vision of a broader reality that still remains elusive—that hangs somewhere between metaphor and straight-up weirdness.

When we first meet Brussolo's protagonist, David Sarella, he’s a high-end thief about to pull off a new job with his crew. But something isn't right with the world:

The great white façade of the museum was looking more like a chalk cliff all the time, and the massive statues lining the front steps like . . . reefs. Timid waves were rising from the gutters to lick and lap at the first steps, dragging seaweed and driftwood in their wake. David blinked. The marble stairs were slowly eroding, the steps sagging, soft as sand. They melted into each other, forming a small, very white beach in the pale light of a full moon. (p. 4)

"Fix your stability," warns Nadia, Sarella’s fellow-burglar (and love-interest); fortunately he has a few consistency pills to get reality back to looking how it should. I say "reality," but this is actually a dream—and not just any dream. In the world of Brussolo’s novel, it turned out that mediums who were once thought to be communing with the dead were actually reaching into their own subconscious. The "ectoplasms" that they manifested were literally the stuff of dreams.

And the stuff of dreams is quite remarkable. The ectoplasms radiate a benign aura, which has therapeutic effects on humans. They’re now highly sought after as sculptures, so much so that other forms of art have been rendered obsolete. The mediums of today—of whom David Sarella is one—are artists, diving into their dreams and competing to bring back the greatest ectoplasm. Society has created an entire infrastructure around the dream-sculptures, including specialist nurses from the Museum of Modern Art to monitor the mediums’ health, and disposal facilities for decaying ectoplasms, which need careful handling.

The Deep Sea Diver's Syndrome works in part as a study of the relationship between society and artist. It’s true that the dream-sculptures are valued in more than simple monetary terms: one of the largest was commissioned in order to stop a war, by stifling the anger of those involved; now it stands on display in public, and visitors throng to be exposed to its rays. The flipside of this, however, is that the medium who produced that vast sculpture is now pretty much a withered husk. Not only do the ectoplasms have no beneficial effect on dreamers themselves, retrieving them takes its toll:

Each time [Sarella] managed to bring something back from the depths of dream, he lost weight, as if the object expelled through his mouth corresponded to an actual portion of flesh. Each time he stepped on the scale after a dive, he was convinced he’d undergone a mysterious amputation. Something had been taken away from him, he didn’t know what; it was painless, and yet his anatomy was no longer complete. (p. 98)

Brussolo depicts a system which is essentially parasitic on its artists: it has time for you (or what it can get from you) as long as your ectoplasms are of good quality; but, when they cease to be saleable, people can always go elsewhere for their artworks (and note how, for all the research there has been into the sculptures, the ill-effects on dreamers seem not to have been investigated). But the divers keep on diving, driven by their own obsession—perhaps for the potential monetary reward (the deeper you dive, the larger an ectoplasm you might return with), perhaps just to be in the dream world. These are not exactly subtle metaphors, to be sure; but The Deep Sea Diver's Syndrome is a book that runs on broad strokes, not subtlety.

The novel also addresses the nature of the dream world itself, and here readers who are so inclined can revel in disorientation and strangeness. The official position, as represented by Marianne, Sarella's nurse, is that the dream world has no objective reality—and even its subjective reality is an illusion. "Consistency pills, realism powder—they don't exist," Marianne tells David. "They're inventions of your subconscious, symbolic warning signs" (p. 27). Where Sarella experiences a jewel heist, other mediums like him might make sense of the dream through images of space exploration, or pretty much any kind of adventure scenario.

But David is convinced that there's a real world "down there," not to mention a real Nadia, to whom he longs to return. "Down there" is part of the diving terminology that the mediums have adopted to conceptualize what they do when they dream. Officialdom might disapprove of any metaphor being laid over the experience, but it's a metaphor that works: "pressure" builds as you go further into a dream; and you have to take due care to manage the effects on your body. Brussolo presents vivid flashes of the diving life, such as his description of dreamers having to be weaned back on to solid food as they attempt to adjust to reality; or the hallucinations—effectively withdrawal symptoms—that presage a dream:

Seized with vertigo, he dragged himself toward the bedroom and collapsed across the bed like a shipwreck victim clinging to a life raft. The apartment seemed to be hitting twenty-foot troughs, and huge waves came crashing down on the tiled floor with the thunder of a waterfall. The smell of iodine was everywhere now. The salt-starched bedsheets stuck to David’s fingers. (p. 122)

What ultimately makes Brussolo's novel work for me is how it knots its different strands into strange and distinctive shapes. There are grand imaginative spectacles: David imagines his final, go-for-broke job as an attempt to steal an elaborate painting of a battle scene that comes to life during the theft—and it is a joy to read. There is plenty of detail of a society transformed by the mediums' work; but, when everything is brought together at the end, you realize just how much has been left unrevealed. Then there are the small digressions: at one point, Brussolo goes into loving detail describing David's penchant for good bread. When reading this section, the thought passed through my mind that it effectively places Sarella in the same position as a connoisseur of ectoplasms, reliant on another’s work to fulfil his own desires. But then the moment passed, and it all started to seem one of the odd blemishes that help give the book such character. This is a novel that can’t be reduced to a metaphor, or a character study, or a work of pure imagination. It is all of these things at once, incompletely and held in tension.

In sum, The Deep Sea Diver's Syndrome is a 360-degree cross section through a fictional world created and dispensed with in barely two hundred pages. It is as tantalizing, frustrating, and exhilarating as that sounds.

Like Loading...
© Copyright 2016 By: David Hebblethwaite
About David Hebblethwaite
David Hebblethwaite was born in the north of England, went to university in the Midlands, and now lives in the south. He has reviewed for various venues, including Vector, The Zone, Fiction Uncovered, and We Love This Book. He blogs at Follow the Thread.
No comments yet. Be the first!