Reviews
Size / / /
The Five Wonders of the Danube by Zoran Živković, translated by Alice Copple-Tošić
By: Andy Sawyer 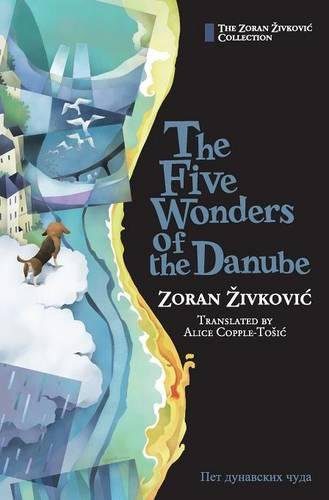 Five imaginary bridges cross the Danube in this series of linked short stories (or mosaic novella). We are living in a present where to think about “bridges” is a kind of counterattack against those who would prefer to think about “walls”, but anyone who has encountered Zoran Živković’s fiction will know that he is too expert in exploring the possibilities of the realm of the Fantastic to give us simple allegory. Certainly the Danube itself is a peculiarly liminal river, tracing many different histories and political enmities of the region now called “Europe” in its journey to the Black Sea; and bridges across the Danube offer a kind of double liminality. Sometimes, still, the country you are in when on the Danube depends less upon the authority of a map but the person you are talking to. While the locations of these stories are Germany (Regensburg), Austria (Vienna), Slovakia (Bratislava), Hungary (Budapest), or Živković’s own Serbia (Novi Sad), the actual focus is a “river full of wonders”: the river of story, or the Danube, we can take it as we wish. (And anything I am suggesting below is countered in the book’s final paragraph; a final reminder by the author that he, rather than reader or critic, is in control.)

Nevertheless, there are moments in the first “wonder” (each story is simply entitled “First Wonder”, “Second Wonder” etc.), in which a hapless security guard discovers a large, and curiously variable, painting glued to the Black Bridge of Regensburg, which makes us think of the more complex explorations of Kafka. The “responsibility” for dealing with the intrusion is passed up varying levels of bureaucracy from the guard’s supervisor to the police to military security. The journey is as chillingly comic as anything labelled “Kafkaesque”, but as we stop at the other bridges we discover that it is the guard’s naive reaction to the “pretty painting. Perhaps he could keep it […] It would be a pleasant memento of all the years he’d worked there” (p. 4) which is the keynote to the story-cycle. In all, our reaction to art is brought up close by the currents of fantastika which swirl around these mysterious bridges. On Vienna’s “Yellow Bridge” five people—a theatre prompter, a contract killer, a “prostitute”, a book thief, a nun—experience a mysterious hesitation. All five are marked by the unusual. The prompter has witnessed the principal actor taken ill while playing the part of someone having a heart attack. Could she have intervened and stopped the play? The superstitious killer has helped the man he is to kill after the man fell on the street, and parted with him on friendly terms, even patting his dog—is this a bad omen? The prostitute offers no sexual services—her clients are artists (singer, sculptor, painter, composer) to whom she is audience or model. She has left her latest client, the singer, choking on blood after an artery has burst. The book thief liberates rare books from private collections and gives them to libraries: he has just witnessed one of his victims committing suicide. The nun has a taste for the cinema, and on one of her regular visits is assaulted by a man sitting next to her, who almost immediately suffers a seizure and dies. As each person returns home, a similar routine is followed, replayed in a surreal crescendo as we return to the bridge, scenes unobserved by a cruise passenger whose boat had been delayed by a medical emergency and a voyeur whose usual practice has been interrupted by “trivial obligations” but who is haunted by the feeling that he has missed “something that might appear once in a lifetime” (p. 107).

Beneath the Red Bridge of Bratislava live two homeless men. Isaac carves beautiful figurines from pieces of firewood and sets them drifting down the river. Fyodor’s only possessions are six novels by Dostoevsky which he loans to his friend. At night, Fyodor scribbles in a folder of manuscript pages, leading Isaac to speculate that he is in the presences of a great writer who might even mention him in his magnum opus. As winter draws on and the weather gets colder, they find fuel for their fire increasingly hard to come by. Fyodor offers his books—but an argument over the order in which to sacrifice the works of the great Russian novelist comes to nothing when, to Isaac’s horror at the loss of something unique, Fyodor brings out his manuscript to feed the dying flames. In both figures, Živković is once again saying something about art—both the inadequacy of artists to live up to their dreams and the power of art to keep us warm. But once again there is a coda which seems to ask us to wonder if statements about art as something to bring meaning to mundane lives are not rather too cosy and mundane in themselves.

On the White Bridge of Budapest an elderly composer relives three experiences from his younger days which seem to have been his bargain with the Muse. In the first, he chooses to become transfixed by the cascade of music “as though the bridge had turned into a gigantic orchestra” (p. 137) rather than save the life of a young woman who is about to jump from the bridge. Later, as a music student, he writes down this music and it launches him into a stellar career. Two other encounters with the bridge’s music become more personal, the price for inspiration and creativity rising higher and higher. At the end, the question of what we must sacrifice for Art remains unresolved (and indeed, the ending can be read as one which determinedly calls into question this very idea of a Romantic “sacrifice for Art”).

Finally, the central character on the Blue Bridge of Novi Sad is a small dog (dogs feature in all the previous stories to the extent that this is one of the motifs in all of them). On board the bridge, which ascends in response to what the dog sees as birds (but birds with “unusually stiff wings they didn’t flap”) which brings fireworks in response and leaves geysers spouting out of the river (pp. 164–5), the dog travels up the Danube. The bridge itself, whose occasional thought-processes we are sometimes privy to, is also a character here, and the story seems to wind up the cycle in yet another wild recapitulation of motif.

Reading the stories once allows the unexpected to hit you. Reading them twice allows us to follow the presence of motifs (the bridges, obviously: the concerns about art, naturally, but also the characters, especially the small dogs and the animals that appear, Lewis Carroll-like, in the second “Wonder”) which occur and develop like musical themes. Živković is also one of our funniest fantasists. If we develop the comparison which the author must be heartily tired of by this time, reading Živković even at his darkest makes us think of how Franz Kafka is supposed to have burst into gales of laughter when reading his work to friends. The exchanges between the various security agents in the first “Wonder” made me smile. By the time I got to the bird-dog’s response to the reading-out of the manuscript in the green folder in the last “Wonder” (with our viewpoint character miffed because the reader, though another dog, and with impeccable diction, is a nondescript mongrel), I was laughing out loud at the picture of the amateur critic we all know and love (and sometimes are):

The bird-dog was enchanted after the very first page of the manuscript in the green folder. What exciting material, what style, what expression. If his literary experience were more abundant, he might have noted some flaw, but he was happy to know quite little about prose. Sometimes too much knowledge hinders more than it helps. (p. 173)

There is also, if I’m not mistaken, a sly dig at some of the excesses of performance art.

The viewpoint here, of course is that of a dog who doesn’t quite know what’s going on. But then, that is our own viewpoint for a lot of the art we experience, and so it should be. If we knew better, we’d be the artist. Živković is a master of that kind of nudge of viewpoint. Ably translated, as ever, by Alice Copple-Tošić, The Five Wonders of the Danube makes us want to go with the flow of increasingly imaginative narrative, but also to stop (as you can do so much on such a river) and think about the context of where we are.

Like Loading...
© Copyright 2017 By: Andy Sawyer
About Andy Sawyer
Andy Sawyer is a retired librarian, researcher, critic, and reviewer of SF. From 1993-2018 he was librarian of the Science Fiction Foundation Collection at the University of Liverpool Library, where he also taught courses on SF, and was Reviews Editor of Foundation: the International Review of Science Fiction. He was Guest Curator of the British Library Exhibition “Out of This World: Science Fiction but Not as You Know It” (20 May-25 Sep 2011), and an advisor to the “Into the Unknown” exhibition at the Barbican Centre London (3 June-1 Sept 2017). He was the 2008 recipient of the Science Fiction Research Association’s Clareson Award for services to science fiction. He is currently researching science fiction of the 1950s, the life and work of Jane Webb Loudon, and how to play “Science Fiction—Double Feature” on the ukulele.
No comments yet. Be the first!