Reviews
Size / / /
The Madwoman of Serrano by Dina Salústio, translated by Jethro Soutar
By: Rachel Cordasco 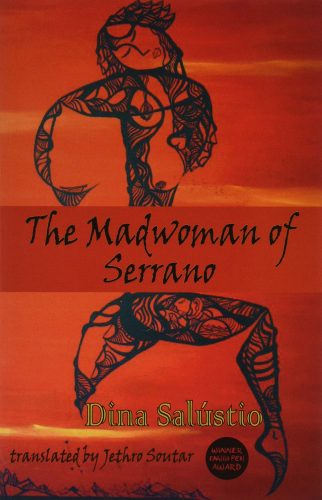 The Madwoman of Serrano is the story of an ancient village and the legends that seem to freeze it in time. It is also the story of modern life in the big city, a place that tries but fails to keep the past at bay.

As the first novel written by a woman to be published in Cape Verde (in 1998), and the first from that nation to be translated into English (in 2019), The Madwoman of Serrano is a narrative about an underrepresented people. Salústio tells this story of love, family, memory, and modernity with a light but confident touch, leading the reader into extended moments of dreamy contemplation before they even realize what’s happening. Perhaps it is this kind of style that seems to warp time: the sections set in the village of Serrano seem to move slowly, while those set in the city seem to move much more quickly (except when one of the main characters lets her mind wander back to the past).

Serrano is, indeed, a dreamy, time-locked place. As we learn early on, it didn’t even have a name until some city engineers traveled there and asked the villagers what it was called. When the midwife (the most powerful person in the village) comes out with “Serrano” and then dies on the spot, the rest of the villagers repeat the name over and over until it becomes an almost tangible thing. As the narrator explains, they live in a land that has been cursed: men are sterile but blame their wives, very few men ever leave to see the outside world, and no one ever laughs or thinks of new ideas because it would never occur to them to do so.

The outside world literally crashes into the world of the village in the form of a downed plane that comes to earth several miles away. One survivor—a young woman named Genoveva from a wealthy city family—manages to crawl to the outskirts of Serrano, where she is found by the villager Jéronimo. Locked in an unhappy marriage, and feeling trapped in the village but unable to leave—because doing so would mean abandoning his father—Jéronimo instantly sees in Genoveva the promise of a happier life. Since her injuries have robbed Genoveva of her memory, Jéronimo names her Fernanda and nurses her back to health (though her amnesia continues); but when she gives birth a few months later and runs away, Jéronimo is left to raise the child, whom he names Filipa.

The bond that develops between these two people, who are related not by blood but by destiny, underscores the fact that families come in many different shapes and sizes. Indeed, many of the families described in The Madwoman of Serrano are fractured or built only after a long struggle: many of the Serrano women have to go to the city for help getting pregnant, Genoveva/Fernanda is an only child because her father gave her mother an STD that rendered her sterile, and Filipa lives with one foster family after another when she is taken to the city for her health. The only bonds of love that we see in the novel are between Jéronimo and the three most important people in his life: his father, Genoveva/Fernanda, and Filipa.

Throughout, the narrative skirts the “madwoman” of Serrano, a kind of prophet who is both feared and revered by the villagers, especially since she is reincarnated over and over again until she fulfills her duty to the village. She predicts Serrano’s destruction, which hangs over the villagers like a cloud, and which ultimately comes to pass when the city engineers, who had visited the village years before, finally return to build a dam. The waves that drown the village also sweep away those who had refused to relocate to another area, breaking the spell that had bound the villagers to the ancient land. It is this act of destruction that frees Jéronimo to move to the city, where he winds up encountering Genoveva/Fernanda, and then Filipa, completely by chance.

Memory is, in fact, the main character in The Madwoman of Serrano. It is what binds the villagers to their land (for better and worse); what keeps Filipa connected to Jéronimo across the years; and it is the lack of memory (that is, amnesia) that creates the conditions in which Jéronimo, Genoveva/Fernanda, and Filipa can form their own kind of family.

As Salústio’s narrator explains at the beginning of the novel, this is not just a story of specific people living their lives in one particular city at a particular time. Rather, this is a universal tale, since all people live with a sense of time, place, memory, and the desire for love: “It is a story, then, like many others, of an unknown time and place, of everywhere and of always, a story in which women and men are crushed by too much beauty or, more commonly, too much cruelty” (p. 29).

Like Loading...
© Copyright 2020 By: Rachel Cordasco
About Rachel Cordasco
Rachel Cordasco has a PhD in literary studies and currently works as a developmental editor. When she's not at her day job or chasing three kids, she's writing reviews and translating Italian speculative fiction. She runs the website sfintranslation.com, and can be found on Facebook and Twitter.
One comment on “The Madwoman of Serrano by Dina Salústio, translated by Jethro Soutar”
Out This Month: April – Speculative Fiction in Translation

[…] Rachel Cordasco reviews The Madwoman of Serrano on Strange Horizons […]