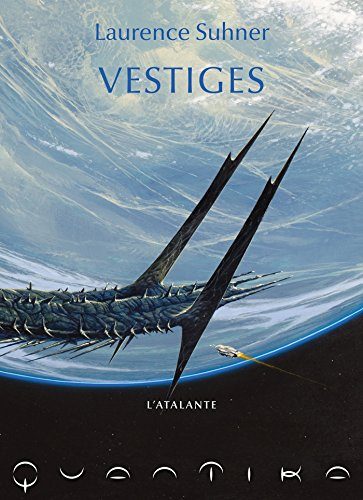 Vestiges, the first book in the QuanTika trilogy, is a multi-dimensional tour de force from polymath Swiss SF author Laurence Suhner. Having studied subjects like archaeology and physics and worked as a storyboard artist and illustrator, among many other things, Suhner is perfectly positioned to bring her readers stories that get to the heart of what it means to be human—physically, psychologically, linguistically—and what our place in the universe might really be. In Vestiges, she brings her knowledge, style, and passion to a story that mixes science, religion, myth, and archaeology in fascinating ways.

Suhner's fast-paced yet thoughtful novel, about two species and their connection to an ice-locked planet, is the kind of book that anyone who loves speculative fiction would want to read. But Vestiges, expertly translated into English by Sheryl Curtis, hasn't yet been picked up by an English-language publisher. This review is by way of voicing my own interest in this book, and the series in general, in the hope that, together, we might convince editors here in the US to bring it over from across the Atlantic.

Set in the twenty-fourth century on a frozen yet habitable extrasolar planet called Gemma in the binary Alta-Mira system, Vestiges is a complex story about a mysterious alien species that visited Gemma centuries before, and the human factions currently fighting over how best to settle the planet for the foreseeable future. Suhner introduces us to the brilliant and troubled exobiologist Ambre Pasquier and her team of glaciologists, geophysicists, geneticists, engineers, doctors, and others who have obtained permission from Gemman authorities to (officially) search for signs of primitive life below the ice. Unofficially, Ambre intends for her team to drill deep into the substrata in search of something that has been haunting her dreams for years: ancient alien ruins that may contain a powerful psychic lifeforce. These ruins may in fact be linked to the sealed ship in orbit around Gemma that the humans have called the "Great Arch," and which they assume was built and left behind by the planet's previous visitors.

Hooked yet? Of course you are.

Ambre's planned excavation coincides with a series of strange accidents that have been plaguing one particular area of the Glacier—one which is important to the colony's liquefied gas and petroleum extraction operations. While authorities have been blaming these explosions on a separatist group calling itself the "Children of Gemma," the members of an experimental physics lab (housed in the former Tetra weather base) have realized that these accidents are likely caused by an inexplicable and terrifying force. They call it the "Collapsus Point," a place where the laws of physics (according to humans) don't seem to apply. As Haziel Delaurier, a member of this team, eventually explains to Ambre, whose expedition he's infiltrated:

The Collapsus Point causes space-time to experience variations that remain unexplained to date. Usually flat, it curves and distorts as if under the influence of a very intense gravitational field. We find ourselves plunged in a universe that reproduced Planck's conditions—minute zero if you prefer—a universe where the laws of physics stop operating in a coherent manner. Linear time gives way to imaginary time, which is both frozen and in movement, expanding or retracting on itself in turn, at a frantic pace. (p. 142)

Here's where two of the several storylines that Suhner develops in Vestiges intersect, with Ambre and Haziel sharing separate knowledge about the Collapsus Point and the ruins that previously only one or the other of them understood. For Ambre, a scientist who has, because of a never-explained trauma that she experienced at the age of thirteen, tried to repress her Mumbai past and her religious and myth-infused upbringing, the fact that her dreams have been invaded by an entity she calls the "Dark Lord" is intolerable. And yet, these dreams have told her exactly where to find alien ruins below the incredibly thick ice sheet, something that scientific instruments have been unable to do. Haziel and the experimental physics team, meanwhile, have been drawn to that same area by the paradoxes of the Collapsus Point, suggesting that whatever is below the surface (a machine? a powerful entity?) is causing the space-time distortion above it.

This human perspective on Gemma's mysteries, though, is not the only one explored in the novel. Suhner, in fact, opens with the thoughts and memories of Tékélam, from the planet Im'shâ, where the conception of space and time and natural laws looks like nothing found on Earth. And yet, Tékélam's people, like humans, are bipedal and intelligent, able to advance technologically far enough to send certain members of their race across the stars. Tékélam's story alternates with Haziel and Ambre's, inviting the reader to compare and contrast these incomprehensibly different perspectives and consider what it would mean for such different species to encounter one another on a planet that means so much to both.

When Tékélam flees his planet to escape the cycle of ritual violence into which his people have plunged, he winds up crashing on Gemma (or what his people call "Pad'jé"). He is unintentionally awakened by Kya Stanford, daughter of the head scientist of the experimental physics team. In her teenaged, hormone-fueled rebellion against her father and the constraining conditions of the isolated weather base, she's joined the Children of Gemma and has been sent to Tékélam's crash site to see what she can discover within the crater. Unbenownst to her, this little expedition has woken the alien within, who subsequently makes his painful and desperate way across the Glacier to the very site where the scientists have excavated a series of ancient ruins.

Ambre's expedition has other problems, though. The rag-tag militia, which has slowly gained power over the colony and amassed enough weapons and other gear to take over the scientific expedition, declares itself in charge of the scientific team. Its aim is to discover any ancient and powerful alien technology that they can use to extend their power beyond Gemma. And yet the hostile clashes between the scientists and the soldiers pale in comparison to the horror that begins plaguing the expedition soon after it breaks through into the first section of ruins. Scientists who have seemed upbeat and excited about their find suddenly start commiting suicide, with one blowing himself up before an intricately-carved doorway, thereby opening the way into a kind of inner sanctum. All the while, Ambre's dreams have been turning into powerful hallucinations and delusions, with the "Dark Lord" making her sleepwalk to the ruins, even as another, unexplained force tries to tear her away. Once the inner section of the ruins is exposed, the militia's eccentric scientist, who has been trying to translate the alien script found throughout those ruins, becomes, like Ambre, the plaything of whatever dark entity inhabits it.

Ambre's subsequent brief and terrifying encounter with Tékélam symbolizes the meeting of human and alien minds. For Tékélam, the alien script is the language of reality, of his people, which he can understand through singing and dancing to its rhythm. But for the humans, it is indecipherable, unless, that is, one has fallen under the sway of the lifeforce that has been caged in the ruins for centuries.

Vestiges is at once a work of hard sf, a space opera that spans lightyears and centuries and delves into complicated relationships both within human society and that of Tékélam's people. And yet, it is also a story about the universality of myth, the roles that religion and music play in social formation, and the ways in which the human brain resists processing that which doesn't fit into a worldview fenced in by a four-dimensional understanding of the universe.

And this is just Book 1.

It's a real shame, then, that Vestiges has yet to find an English-language publisher; but we, the readers, can help change that—by championing it, advocating for it … demanding it. And those of you who can read the novel in the original French can spread the word by writing reviews of it on your own sites or elsewhere. I must also admit to having a selfish reason for wanting this book picked up in the US: I want the next two books translated into English. Vestiges ends on a cliffhanger, and I need to know what happens next. I was lucky enough to get a copy of the English version from the author herself, and now I want more people to share in this exciting reading experience.

Like a Gemman colonist trying to break through the formidable ice sheet with a pickaxe, I've barely managed to scratch the surface of this novel in my review. Suhner's work deserves attention in the US and around the world. Let's make that happen.

Like Loading...
© Copyright 2018 By: Rachel Cordasco
About Rachel Cordasco
Rachel Cordasco has a PhD in literary studies and currently works as a developmental editor. When she's not at her day job or chasing three kids, she's writing reviews and translating Italian speculative fiction. She runs the website sfintranslation.com, and can be found on Facebook and Twitter.
3 comments on “Vestiges (QuanTika, Book 1) by Laurence Suhner, translated by Sheryl Curtis”

When will this be available?

How do I, a reader with no connections to publishers or anything, express my interest in an English translation?

An excellent review of an author who deserves every bit of recognition that you indicate.