Reviews
Size / / /
We Call It Monster by Lachlan Walter
By: Octavia Cade 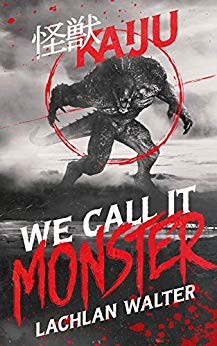 I love a good monster book. I mean yes, they have death and destruction, the ruin of a familiar world. But there’s also wonder in them too, the desire to have that ruined world be bigger and more marvellous than we thought. To look upon monstrosity is to see something dreadful, but it’s also to see something marvellous at the same time. Something awful, in its original sense.

The world seems smaller all the time. More connected, more known. This isn’t entirely an accurate impression. There are plenty of places on the planet that haven’t been explored, or have been but only barely. The most obvious of these is the deep sea. Giant squid, giant sharks, extraordinary creatures that make us question everything we know about life and science; what else is down there? Could be anything. There’s something exciting about that level of ignorance, about the anticipation of surprises yet to come. Those surprises, we think, will be wonderful.

Until they’re maybe not.

Lachlan Walter isn’t the first to tell a story like this. Not by a long way. We Call It Monster is firmly embedded in the kaiju tradition—giant creatures battling humanity and each other, crawling out of deep places and into sunlight. The creatures it describes are awful, like beasts from another world. Because in this world, these things can’t exist: there’s surface area and volume, the mathematical inability of the monster to hold itself up. But that’s okay, and something to be brushed aside, because in the end, what’s doing the holding up is us. Holding up monsters, the avatars of ignorance and immensity. Holding up community, because what fails under the weight of those monsters has to be rebuilt in other forms, and with other priorities.

But nothing—nothing—can compare to seeing those things with the naked eye. I mean, one of them was taller than every single building. It was this enormous centipede-looking thing, covered in spikes. It had reared up, the front half of its body towering over the skyscrapers. And the other one, far out—it was a squat, ape-like thing, perched on top of some office building. It had these wings, which must have been as long as the city block.

This is world-changing stuff, world-destroying stuff, and destroy is what these monsters do. Continents are devastated, entire countries are gone: “New Zealand had disappeared, pounded into rubble and then swallowed by the sea thanks to the constant earthquakes and tsunamis.” Nowhere is immune, and the annihilation of the Earth drags on over time. There is no refuge and no escape.

This is made perfectly plain over the course of the book, which spans from the initial attack on Sydney to ongoing struggle of remnants of human population decades after the invasion.. This structure is actually really interesting—the book reads like a collection of short stories, and frequently a bit-character in one story is the protagonist of the next. This helps to portray the changing world from a number of different perspectives, instead of keeping a tight focus on a single survivor. A community approach to storytelling, if you will, which is in keeping with Walter’s general focus on communities-of-the-apocalypse (more of which later).

But back to apocalypse and awe. The thing about biological apocalypse stories, the ones that come from an invasion of the alien, an invasion that causes an ecosystem to adapt to it in new and surprising ways, is how much I want to be in them. There’s dread and terror and revulsion, yes, but those things go by very quickly. It’s fascination that follows after, the desire to explore that new ecosystem—the automatic Oh, how marvellous. Perhaps it’s that I’m a biologist myself, but the fascination with what apocalypse makes of biology is often less explored than it might be.

More often it’s all about the monsters.

There they are, centre stage, sucking up attention with their giant stomping feet, their wings, their total indifference to human life. The scale of our respective lives are so different they might as well be disease. As much as spreading, reproducing, flesh-eating bacteria might gobble one up, you’d hardly call them predators. The relationship is too distant for that, the sense of human presence too minute. Walter’s monsters don’t go hunting humans, either—not really. Their life cycle goes on, and it goes on, and it might be ultimately destructive to human life but that is hardly a concern to monsters, because scale has removed the individuality of predator-prey relationships. These monsters are so busy fighting each other they hardly even notice us.

And, you know what, good for them. I had a brief pang for all the known animals this sort of apocalypse would destroy—the elephants, the kakapo, all the little wonders we think we’ve encompassed already and learned to ignore. But the shoe, suddenly, is on the other foot. In the life of monsters, we barely rate a mention. There’s something very confronting about that. All our culture, all our military might, and it’s all been a waste, because in the end we’re not anywhere near powerful enough. We’re outclassed on every level, so unimportant that our best efforts hardly scratch the surface.

Somewhere, before the monsters finished them off, the orangutans on the edge of a palm oil plantation were laughing, poor unimportant beasts as they were. Somewhere the pangolins were curling up to die, content in the knowledge there was no trade we could make of their skins at the last that would cause the monsters to care.

There’s a reason I always rooted for Godzilla. There comes a point when you think we really have it coming.

And I love that what exists alongside this hideous balancing of scales in We Call It Monster is those who are not monsters at all. This is the second apocalyptic/post-apocalyptic novel I’ve read from Walter. (The other, The Rain Never Came, I also reviewed for Strange Horizons.) I enjoy his work; I find his take on the end of the world deeply refreshing. Why? Because his characters are decent people. The communities these individuals hold on to and construct, the society they make in the midst of ruin, are ones of decent people. These aren’t stories that focus on resource-hoarding, on using that hoarding as an excuse for rape or slavery. They are stories of decent people doing the best they can to help each other survive. People are kind to each other. This doesn’t mean they don’t lose their temper, that they don’t give up, that they don’t get sick and frustrated and sad. It does mean they don’t let these things make them worse than they are. They navigate disaster, the end of all things, with the best possible grace they can manage.

And none of this matters to monsters. None of it! Because we’re too small to matter to them, too unimportant. Apocalypse has come and there is no rescue, and no recourse, and no happy ending. And this is something we have inflicted again and again on other species, both knowingly and not, and this is something we somehow do and do not deserve, and it doesn’t matter, because apocalypse, fundamentally, is not a story about deserts and how just or unjust they might be.

And that is a marvellous thing.

I love that marvel is such an intrinsic part of this book. For all the annihilation the monsters cause to the ecosystem that’s meant rather to be ours to annihilate, what they bring with them is an ecosystem of another kind. In the empty lands, the ones scoured free of human and animal life, of plants even, there’s a new ecosystem developing. It’s monstrous itself, full of creatures reminiscent of past ages. Giant dragonflies, birds and beasts that are smaller than monsters but just as alien. And I find myself slightly jealous of the characters exploring this replacement ecosystem. They’ve lost everything they love, they’ve pretty much lost hope even, but they’re in a world of marvel now and they know it.

Kim, a former vet, has been drafted to a last-ditch effort of biological research. She, a retired professor, and a grad student in botany are the only ones left with any scientific training, the research centres that were desperately searching for ways to counter the monsters having all been crushed. The three of them are plucked from a refugee camp and ferried to this new ecosystem, initially reluctant before the community drive so important to Walter takes over. “Why should you be allowed to give in?” Kim is asked, and the shame this question causes in her allows her to rise above trauma, the desire to hide in her tent and let other people take care of her. “I’ve been safe in the camps for so long, the government doing their best to take care of me,” she thinks, cringing at her desire to turn away, to not help those around her. “I’ve been helped for a lot of my life, and now that it’s my turn to help, how could I have even contemplated refusing? [...] If we’re the only people who can help understand it, how can we say no? How would we live with ourselves?”

How would we live with ourselves? It’s a double-edged question, that, especially in this text. The monsters are ourselves, and the monsters are arguments to do better, to be better. So Kim hauls herself upright and remembers what she can do and sacrifice for others. She heads out in search of understanding.

What she finds leaves her entranced. And so she should be. I went into biology myself because it’s full of marvel and wonder; the interaction of an ecosystem is the part of science that most appeals to me, so I get Kim, I really do. There’s a magic world in front of her now. A terrible world, an awful world. A world that will see the end of her, and of everyone like her ... and she falls in love with it. Becomes infatuated, anyway, at least for a little.

Half-a-dozen enormous ants were feasting on something barely twenty metres in front of us, something huge, dead and half-rotten. Each ant was the size of a small dog, with jaws like bear-traps and spindly legs that seemed almost comically frail. As we watched, one of the ants tore a ragged strip of flesh from the dead thing and darted off into the bush[.]

Kim’s supposed to be taking samples. Supposed to be acting as scientists act, collecting little pieces to make sense of the whole, to find a way to understand and then control. And then she thinks as biologists think: “The ants were gorgeous and grotesque; it seemed like a travesty to kill something so unique.”

It is a travesty to kill such a wonderful, marvellous thing. (We do it all the time.) A travesty, and Kim is gorgeous and grotesque and unique herself, and everyone like her has been killed by monsters. (They do it all the time, and are just as wonderful.)

We Call It Monster, says Walter. There’s recognition in the calling.

Like Loading...
© Copyright 2019 By: Octavia Cade
About Octavia Cade
Octavia Cade is a New Zealand writer. Her stories have appeared in Clarkesworld, Asimov’s, and Strange Horizons, amongst others. Her most recent novella, The Convergence of Fairy Tales, was published by The Book Smugglers.
No comments yet. Be the first!