Reviews
Size / / /
When We Were Animals by Joshua Gaylord
Karen Munro 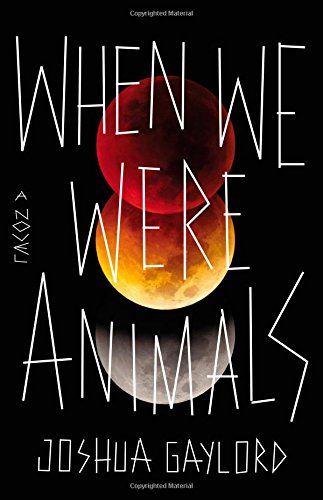 Lumen Fowler isn’t actually a werewolf, but she might as well be. Like all the other teenagers in her small, unnamed American town, she spends a year of her life running wild once a month, every month, on the full moon. The townfolk call this breaching, and it’s a bit like what happens in Vegas—outside of Lumen’s town, nobody knows a thing about it. During each monthly breach, Lumen and the other teens strip naked and literally run through the streets in packs, fighting and screwing and causing general mayhem. Everyone else stays inside, behind locked doors. You don’t want to get caught out after dark while the moon is full.

Horror stories about out-of-control teenagers are nothing new, and you could argue that we’re wary of teens for good reason. Adolescence is one of the wackiest, most atavistic, and unpredictable times of our lives. Hormones are heady things, especially combined with inexperience and forebrains that haven’t fully gelled. They can transform us mysteriously and completely, despite our own best intentions—the sweet eleven-year-old kid can become a sullen, foul-mouthed thirteen-year-old at the flip of an invisible switch. And while the changes usually settle down after a while, they’re irrevocable. Puberty scares adults for lots of reasons—but for the teenagers being dragged through the doorway it’s scary in a whole other way. Like death and high diving, there are no take-backs.

Which is one reason why When We Were Animals is such a brilliant setup. We’re with Lumen as she tries desperately to navigate the unwelcome changes of the breach, which are really the same familiar changes we’ve all gone through (or are facing down)—taken to a speculative extreme. At the start of the book, she’s determined not to breach, although how she plans to forestall the process was never really clear to me. She loves her doting, slightly dopey father, she idolizes the memory of her long-dead mother. And she’s been told that her mother somehow never breached. Again, it’s never really clear how her mother managed this feat, since breaching doesn’t seem to be something that anyone really chooses. Like acne and mood swings, it’s just part of the package for teens in Lumen’s town.

It’s not really spoiling things to say that Lumen does, indeed, breach—this book has bigger secrets to keep, and it’s pretty clear from the outset that breaching is the gun on the mantelpiece. After all, it’s one of Gaylord’s points that you can’t go from childhood to adulthood without somehow navigating the rocky terrain in between. That’s terrain that Gaylord, who teaches high school English, understands well. He’s the author of several previous novels, including (under the pen name Alden Bell) the excellent The Reapers Are the Angels, a kind of Faulknerian coming-of-age story of a teenaged girl in the zombie apocalypse. Under his own name, he also wrote Hummingbirds, about girls’ rivalries in an elite private school. Suffice to say, Gaylord has spent some time considering the terrors and delights of female adolescence.

When We Were Animals feels like a hybrid of Gaylord’s previous works—part dark speculative fiction, part close examination of the emotional dramas of high school. After one of Lumen’s breaches, she wakes up naked on her own doorstep and can’t get out of sight quite fast enough—her father is startled, disappointed, embarrassed, resigned. The two of them suffer through a painfully awkward breakfast, talking around the incident and trying to pretend everything’s normal. It’s a familiar scene for anyone who’s ever taken a so-called walk of shame. Lumen longs for purity, for childhood, for stasis, for stability. But when the moon waxes full she’s out her bedroom window with hardly a second thought, naked and ready to run. Adolescence in a nutshell.

So the breach is a great premise for a novel about the horrors of puberty—and yet in some ways it fails to really deliver on its promises. Every girl in Lumen’s town goes on the birth control pill before she breaches, because all the town’s parents understand that their kids are going to have wild, lawless sex in the streets. Gaylord finesses his way around the question of rape, pointing it in the direction of ambisexual soft-focus orgies and rough but consensual sex, presumably because if the rules of breaching involved monthly gang rapes then this would be a very different kind of book. But you don’t have to interrogate the concept of the breach very much before these kinds of questions become troublesome. If teenagers really were reduced to their most basic impulses and desires, disconnected from any sense of morality or consequence, wouldn’t that result in some serious brutality—rape and murder and who knows what else? If Gaylord’s point is that adolescence is a kind of horror show in which we all must star, then why soft-pedal the sex and violence?

Because while the breach is interesting, it ultimately felt defanged to me. Breaching teens brawl and tussle, they drop trou and run through the streets in the dead of winter, and once in a while they do get into more serious trouble—in particular, when they turn on each other or on an innocent bystander. But most of their violence is the slap-and-punch variety. Lumen’s girlfriends wear their bruises proudly and casually, as badges of honor and womanhood. Even the aftermath of rough, painful sex is shrugged off as an inevitable side effect of growing up, stripped of shame or trauma. In a way, this is an aspirational view of adolescence—if only we could all get through those years without feeling guilt or anguish over what we do and what’s done to us. But it seems to run counter to the point of the book. If the breach is puberty to the nth degree, then how can it also be essentially harmless? It can’t, but to follow the wildest urgings of unleashed teenaged hormones would be to go to a very dark place. Gaylord stops short, and the story at times feels muted as a result.

The other thing about the breach, of course, is that it’s not something you do—it’s something that happens to you. As long as Lumen is trying her best to follow in her mother’s footsteps and resist the breach, she’s got some agency and volition. Once she breaches, the story casts about in search of another goal for her to pursue. She spends part of her time tracking down the mystery of her mother’s life and death, and part of it probing the equally compelling mystery of Blackhat Roy, her high school’s resident ne’er-do-well and scapegoat. Lumen and Blackhat—light and dark, virtue and vice. They’re a good match, although Roy is the more energetic character. Against his destructive viciousness, world-weary cynicism, and buried erratics of rage and grief, Lumen has only her obsession with her dead mother and her ambivalence over her own coming of age. And yet when he tells her, “You’ve got some meanness in you, Lumen Fowler, just waiting to get banged out,” it’s abundantly clear that he’s right (p. 231). Lumen after a year of breaching is a very different person from the Lumen who had never climbed out her bedroom window or run naked through the woods. Gaylord does an admirable job of tracking those changes, showing us at first a girl who wants to live forever in her mother’s narrow shadow, then a young woman grappling with and changed by the unfathomable cruelties and wonders of the wider world.

There’s no dearth of stories about how scary it is to grow up. There’s not even a dearth of stories painting children and teens as animals, and puberty as animal transformation—see, for example, this list of recent books about feral children from Electric Literature, which only nicks the tip of the iceberg. Gaylord’s entry stands apart as a patient, thoughtful portrait of a girl progressing into womanhood, disguised as a work of speculative fiction. Like so many of the best works of science fiction and fantasy, it’s really a book concerned with the mundane and near-at-hand. How do we grow up? How do we make peace with our new selves as the world changes us beyond our own recognition?

The novel is bookended by the voice of Lumen-as-woman, fully grown and now transmuted yet again, into a suburban wife and mother. Just as she never really fit in as a girl in high school or a young woman breaching into adulthood, she doesn’t really fit in at the local PTA meeting. Her young son takes a tumble at the playground and she watches dispassionately, waiting for him to pick himself up. Her husband urges her to be more watchful, more hands-on, and she responds with the equivalent of a shrug.

What he doesn’t know, of course, is what she went through to become the woman he married and the mother of his son. He doesn’t know about breaching, or about Blackhat Roy, or about the mystery of Lumen’s mother—all the secrets of that unnamed little town. And that is exactly the point, for so many of us. Our inner lives and our outer selves are so often different and unconnected. Or as Lumen puts it, “One day you were one thing, and the next day you were another” (p. 219). One day you’re a girl, the next day you’re an animal, and then someday after that, you become a woman. Nobody can really say why or how—only that it happens, and carries us along with it. That’s the story of a life, as terrifying and miraculous and wild as anything.

Karen Munro’s writing has appeared in Strange Horizons, Crazyhorse, Redivider, and elsewhere. She has an MFA from the Iowa Writers’ Workshop and is working on a novel about strange things in the Pacific Northwest. In October she will you send you a scary story a day. You can find her at http://munrovian.tumblr.com.

Like Loading...
© Copyright 2015 Karen Munro
About Karen Munro
Karen Munro lives and works in Portland, OR. She completed her MFA in Fiction at the Iowa Writers' Workshop in 1999. For more about her and her work, see her website.
No comments yet. Be the first!