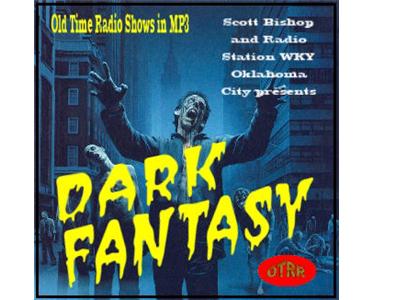 Last time, we listened to something from the series called Hall of Fantasy. Today, we will listen to a show from Dark Fantasy, which is a different kind of fantasy altogether. The name of the show is "The House of Bread" (December 26, 1941). Illustrious Acquaintance says it sounds kind of religious, but what if ... WHAT. IF. this is about an actual house made of bread! That does magic! The prospect of this is very exciting, so without further ado!

Someone just said Dark. Fantasy. and it sounded like he was either really sleepy or about to sneeze

I AM READY FOR THIS

So far someone has burned incense, an organ was playing and ScottBishop fell asleep

Excited for this to get more exciting

ScottBishop is having feelings about something idk and the other dude said maybe you are looking for the truth whaaaaa don’t do that, come on

ScottBishop just asked What is the Truth noooooo don’t do that, ask about zombie bread houses!

ScottBishop seems upset about the truth?

I have no idea what these two are talking about tbh

This is a Christian story isn’t it

No house of bread yet. Hope to hear about it soon

Now they are talking about the Bible

Oh the other dude’s name is Word apparently

What if this show is a half-hour metaphor for life?

We’re not even five minutes into this show omg

Let’s not forget, all this is apparently a dream!

So Word aka the other dude said if ScottBishop wants to find all these weird things, he needs to find the house of bread

ScottBishop does not tell anyone about this dream

He didn’t even tell Sonia

I want to be ScottBishop

How I was hoping this would be about an actual house made out of bread that also turned people into bread. Or small buns

“So I’ve worked hard and maybe I’m a success”—I can honestly say I have never, ever heard anyone say this irl

I’m sorry everyone for saying that

But none of y'all read this so whatever

They are on the way to Vegas I think

Sonia is keeping a diary. This is also not so interesting

Thanks to the diary, we can hear about all the places they have been to which has basically been America

Now they are going to London

Oh Big Ben maybe? But why tho?

Anyway, they have basically been sightseeing in London

They have gone to Paris and Madrid, where again, they just seemed to be sightseeing

Now they are in Morocco. Uh oh.

MUST BE MOROCCO I GUESS

Now they are being tourists in Tripoli

Now they are being tourists and slightly offensive in Cairo

There’s a big star? In a storm? I think?

I guess they are following the star now

THIS SOUNDS SO MUCH LIKE ONE ANOTHER FAMOUS STORY WOW

Oh is Word supposed to be God? Idk

Illustrious Acquaintance thought they were both the same hahaha silly heathen

Are they the same?

I guess they found the house of bread? Yay?

See if I had known this earlier I probably wouldn’t have had expectations of a zombie house made out of bread that turned people into bread. Or small buns

Now I just feel like a silly, uncool heathen

It’s always embarrassing when you think a story is going to be about a zombie bread house and it turns out to be a religious-themed story. That is what has happened today. Also, in my last column I wondered why there were no fantasy stories dealing with Christian god/s! And here one is! Maybe the Christian god/s are dealt with a little differently from Kali, but who are we to nitpick, 'tis a fantasy story nonetheless. I can’t think of anything else to say about this.