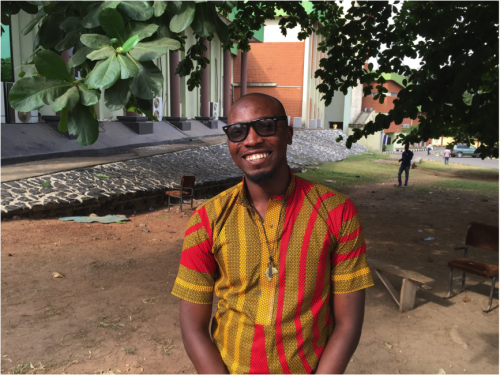 Tolu Daniel works as an editor for two journals. Afridiaspora is a respected literary webzine that has also successfully branched out into publishing anthologies.

Tolu also edits for a new journal that had its first issue recently in November 2017, The Single Story Foundation Journal.

Tolu: “It was so interesting seeing the stories we got from the first call for submissions. My personal favourite was from Ifeanyichukwu Eze, who wrote about his grandfather. I could have sworn that narrative was about me. I edited it as I would have edited my own work. From the feedback that we’ve gotten, it certainly is one of the favourites of the people who’ve read the issue. It’s called ‘My Grandfather’s Cupboard’ by Ifeanyichukwu Eze.”

Tolu got into editing through his friendship with the founder of Afridiaspora, Nana-Ama Kyerematen, from Ghana.

Tolu: “She was always telling me about how she feels my work would benefit if I read this or read that. After a while we started thinking about expanding Afridiaspora.

“I told Nana-Ama, ‘Hey, I can do this thing. Let me work with these writers.’ It was like a mentorship thing with the writers. After a period it kind of stuck because I enjoyed doing it. It was really interesting to know that I could give suggestions about how a particular work might look and someone would take it seriously.

“I’ve been able to work with some fantastic editors also, like one of my favourites is Adeola Opeyemi. She was shortlisted for the Writivism Prize in 2015 for a story, ‘Being a Man.’ Last year she was shortlisted for the Miles Morland Fellowship too. I am working with her on polishing my own prose as well. So it’s not just that I’ve focussed on the editing part of the business. My prose has really really benefited from the work too.”

I ask about his biography.

Tolu: “I actually live here in Abeokuta. I was born here. I’ve been attending Ake Festival since its inception. I’m always here. I call myself the unofficial host of the Ake Festival.

“I get to see most of my friends at Ake, and we get to hang out and talk. I have also had the pleasure of meeting some of my literary influences here. I attended the Ake Festival masterclass, the first one that was taught by Lisa Teasley and Doreen Baingana.

“I studied economics at Tai Solarin University of Education in Ogun state. Going to the school was not my choice, it was my dad’s. He wanted me to be close to him because he was working in the town. I had just finished secondary school, and I wanted to be at home with most of my friends. My dad wouldn’t have it. I didn’t do really well, but I graduated at nineteen. I just knew that everything I did there would not be useful in the future.

“In 2010 I came back to Abeokuta and my older sister started giving me books to read, because she reads a lot. I was frustrated with the environment so she felt, OK, if you had books to read, maybe you’d feel fine. She bought me all the Harry Potter books. After I finished the Potter books, I told myself, I’m going to write my own Harry Potter series.

“I also have a group of friends like TJ Benson, who has a book coming out next year. He was one of the few people who sat me down and explained the way you could write a sentence and make it yours. Since he told me that, it’s been the highlight of my year. It’s been the most important thing a writer has ever told me. Create your sentences. They are as important as the story is. For most of my writing life I thought, ‘Hey, let’s string some words together and make a fantastic story.’ I would edit other people’s work to make sure their sentences are theirs, but in my own work I was still in the Bush of Clichés. I was still doing what I would criticise people for doing. TJ was like, ‘Hey guy, your work needs to sing you, sing your personality.’”

We talk about the voice in Junot Diaz’s stories, how they mimic Yunior’s way of speaking, and what is meant by voice.

Tolu: “Last week I was in a poetry masterclass with Chris Abani, and one of my take-home points from that was the place of vulnerability in fiction and how if you are able to allow your vulnerability to seep into your work, it can help readers to connect to your emotional core. When you have a voice that is loud enough in your sentences, your readers will be able to connect, even if that is not your intention.

“Because people are interested in your business, they want to hear your story, they want to hear how you navigated a particular experience that they may have navigated before but they want to hear your perspective, once your voice is clear enough like Diaz’s. He was even able to infuse some local Dominican lingo into it. For any African person who is not familiar with Spanish or Spanglish, as he likes to call it, you may think you’d be lost. But he was able to deliver it in a way that was essential to the narrative and that is what I am trying to deliver as a writer.’”

We talk about an African voice and what it might be.

Tolu: “I was going to mention a book that got a lot of people talking and angry, asking, ‘Is he writing for a Western audience?’ That was The Fisherman by Chigozie Obioma. Some of the words he uses to describe everyday things seemed preposterous. When someone like Nnedi Okorafor uses them, she would just have written the word ‘eba’ to represent the same thing Chigozie would write as ‘a mashed-potatoes equivalent made from chipped cassava flour.’ Dude, if you have to explain what eba means, that makes it sound British or American, and doesn’t that rob the narrative of its essence?”

We go on to talk about the Jalada language project, translating from stories that are written first in local languages. I praise Ken Saro-Wiwa for his writing. Tolu mentions a book that is written in a strong African voice, Fine Boys by Eghosa Imasuen.

Tolu: “For most of the new generation of writers, well, at least most of my friends, there are lots of us. Well, five of us. (Laughs.) We are very conscious of the African reader because we are Africans. We live here. We know that kind of books we want to read, the kind of stories we want to be told about us. So we are very intentional about setting words that we use. Last year I was reading Stay with Me [by Ayobami Adebayo]. It’s a prime example of someone who wrote English in Yoruba language. You are reading it in English that is so noisily Yoruba, so noisily local. You are reading characters there that are just like you. It was an incredible debut. It nearly won the Baileys Women's Prize for Fiction; it was shortlisted for the 9mobile Prize. The English was very very indigenous. I want to believe most of the editors were Western but they didn’t tamper with the English. I want my novel to sound that way.”

The novel he’s working on follows three different eras—the foundation of the Oyo kingdom and the kings.

Tolu: “I’m trying to document history properly. I’m trying to talk about Oyo kings and the myths around some of them that are deified. I’m trying to make my narratives in different time lines to reflect the times and seasons. One is a pre-colonial era, there is a before Christ era, and there is now. Each of those things is going to be jostling together. It’s feeling like I’m pulling it off while I’m writing it. I don’t know if it will be as good as it feels in my head.

“When I started my novel five years ago in my head, it was against the backdrop of ‘Hey, I can do this because I see people around me doing it.’ Being part of a vibrant community on Facebook helped. The most important one is the African Science Fiction and Fantasy Writing Group right now. I’m not just saying that. I was about to tell you why. I only recently started sending out my fiction to paying markets and it was because I saw people doing it there. I never knew I could get paid for my writing. It was someone, I think Tade Thompson, who said something about it, that writers should always get paid. At that moment seeing him say that it just occurred to me, ‘Dude, you write some cool stuff too. There’s no reason why you should not try to sell your work.’” 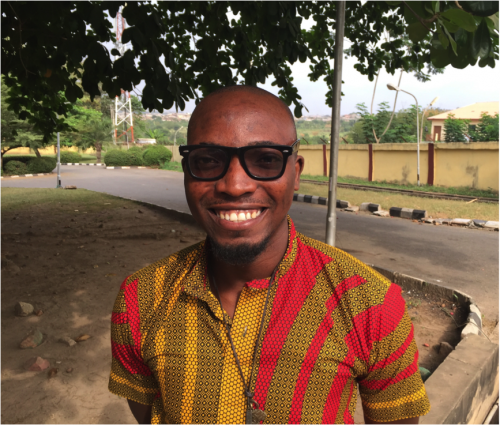 “The Old Man Who Fought Boko Haram” published on Catapult.co

“A Brief History of Illness in My Family: A Personal Essay” published in Prachya Review

“My Legendary Uncle and Other Awful Memories” published in The Wagon and online in the Nthanda Review.

“The Unkindness of Ravens” published in Expound Magazine.