100African
Size / / /
A little bit of Nairobi does you good
By: Geoff Ryman 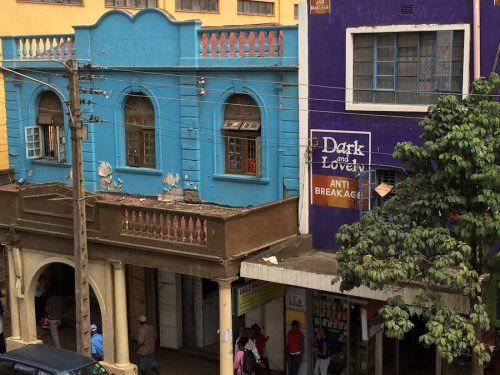 However, many of these new writers bear the same relation to oral literature that (in a different context), Bob Dylan bore to folk music. Family stories are a springboard to something original, that mashes together any language or material that helps these writers express themselves.

What may be special to Nairobi—and perhaps to countries like Nigeria as well—is the way in which monotheistic, traditional, and scientific belief systems hover in proximity to each other, often without a sense of contradiction. 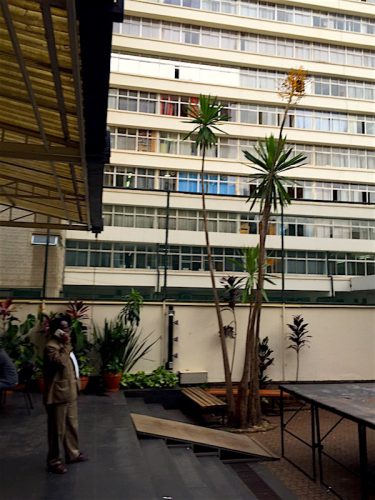 African writers say that they have to be opportunistic—there are writers who write SFF because it’s an opportunity to publish. There are writers who yearn to write generic three-volume fantasy novels, but what they can publish is generic lit fic—pared-back prose, human relations. In one case that includes the inflight magazine of Kenyan Airways.

Aleya Kassam, a professional storyteller in Nairobi, told me, “We don’t have the luxury of genre.” Genre tells you what readers expect, genre provides regular publishing venues. African writers have to write whatever they can publish—at least that is what they tell me in Nairobi. However, as we will see, African artists living in Britain, with access to markets, continue to work in many media and to cross genre boundaries.

What I was not expecting was that so many young East African writers would be so involved in experiments with form and language—either returning to mother tongues, or looking at other Western traditions like the Beats or the modernism of 1930s poets like H.D. In the endnotes to this article, I suggest why this might be. The idea, for those who like hypotheses upfront, is that the loss of educational and literary communication in a mother tongue—being forced to fit in with another majority language—creates conditions for literary experiment. The question still to be answered is why this interest in experimental writing seems so distinctively East African.

Last night in Nairobi I’m with a group called The World’s Loudest Library co-hosted by Ray Mwihaki, whom you are going to meet. WLL is a book swap club, a book discussion club, and a discussion club full stop. It meets upstairs in an Ethiopian restaurant called Dass on Woodvale Grove. I show up on time for the 7 PM start. Mistake. It won’t start until 9 PM and will go on all night. While I wait two hours, we listen to music. The DJ is one of the WLL members and the music is contemporary—I can’t tell if it’s African or American.

So here’s two of the people I met, who for me show what’s special about Nairobi.

Andrew (not his real name) is a white guy from Missouri who got his second degree in Nairobi and now works as a senior editor for a newspaper. He came to Kenya because he didn’t want to end up like other American graduates he knows, biochemists still living in their parents’ garages. There simply aren’t the job opportunities in the USA.

So we are already in the situation where Americans are migrating to Africa looking for work. Right now, these people are imaginative outliers. Point being—things are changing with blinding speed.

Second, meet Laure (again not her name, I wasn’t able to ask if she wanted be quoted). She is a product of the discipline of a Kenyan upbringing. Her parents believed in the creation of a new Kenya, so didn’t allow her to speak local languages. She picked up Swahili and Sheng. She didn’t say but I have a terrible feeling that she is “rusty” in her mother tongue. She thinks that most Kenyans have to learn about four languages and that means they find it easier to pick up languages later in life. That, she thinks, could be a great business strength for African cultures. She speaks English, French, German, Italian, Spanish, and Portuguese, and is learning Chinese. She lived for six years in the USA, hated it, and came back with a post doc in robotics. She knows she won’t find work in Kenya and so will move abroad, probably to China.

As one of our interviewees says, “You stay out of Nairobi three years, you can’t write about the place, it’s changing too fast.” That’s Mehul Gohil, and you will meet him too. He’s an outspoken fellow.

You will hear a lot about Kwani? (“Why?” in Swahili) in this series. When Binyavanga Wainaina won the Caine Prize in 2003 he set up the company with the Prize money. The company publishes regular, book-like anthologies, individual novels, and collections, runs the monthly Kwani? Open Mic nights, and sponsors the Kwani? MS Award, which resulted in the first publication of Nansubaga Makumbi’s Kintu and also of Nikhil Singh’s Taty Went West. Kwani? was one of the sponsors of the workshop that resulted in the foundation of the Jalada collective.

Binyavanga was a key figure in the selection of writers for Africa 39, credited with researching the writers, with Ellah Wakatama Allfrey editing and a panel of three judging the final list of the thirty-nine best African writers under forty. Binyavanga is a mainstream figure but he has always defended science fiction and its role in African literature. He did a reading a couple of years ago at the London School of Economics and it got inside his father’s head in a mix of biography and stream of consciousness fiction—it also drew heavily on science for its metaphors: Higgs Boson for unknowability, neutrinos (I seem to remember) for people who don’t interact with others.

Like Loading...
© Copyright 2017 By: Geoff Ryman
About Geoff Ryman
Geoff Ryman is Senior Lecturer in School of Arts, Languages and Cultures at the University of Manchester. He is a writer of short stories and novels, and science fiction and literary fiction. His work has won numerous awards including the John W. Campbell Memorial Award, the Arthur C. Clarke Award (twice), the James Tiptree Jr. Memorial Award, the Philip K. Dick Award, the British Science Fiction Association Award (twice), and the Canadian Sunburst Award (twice). In 2012 he won a Nebula Award for his Nigeria-set novelette "What We Found." His story "Capitalism in the 22nd Century" is part of Stories for Chip, edited by Bill Campbell and Nisi Shawl and published by Rosarium.
One comment on “A little bit of Nairobi does you good”
Strange Horizons - Introduction: On Diaspora By Geoff Ryman

[…] development of Africa's publishing industry from Kwani? in East Africa to companies like Kachifo Limited and Cassava Republic Press in West Africa began to […]