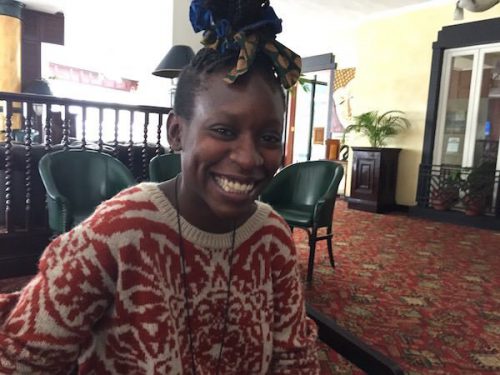 I walked with them to the boat stand. They didn’t seem to mind my presence or maybe they didn’t see me. The thought of invisibility made me smile. I was living vicariously through them. The thought and anticipation of their suffering fed my innermost hunger. This was happiness greater than I had felt ever before and it was only getting better. Now that I had tasted the beyond, I appreciated life and fed on the miseries of life. The one thing I craved from humanity was recognition. No one left a plate out for the unseen. I wanted them to scatter in my presence, to notice me in the least. To leave me little sacrifices to ward off my evil. The movies had lied to us. The living did not feel a sudden shiver when we touch them or walk past. They walk through you and never laugh at the jokes you work eternity to come up with. Good thing is, we eventually get the last laugh.

Ray Mwihaki’s favorite music is the soundtracks of old gang-related games—the kind that used 40s to 50s jazz. She makes mixtapes of them. She is much influenced by Datacide, a German website that publishes papers, discussions, or stories. “It’s a controversial, grungy publication, really heavy with no filters, nothing polished or pretty.”

Ray is the manager and sub-editor of Manure Fresh, the first hardcopy publication of the group blog Fresh Manure.

Ray wants Manure Fresh “to rival the standards set by Jalada or Kwani? but have stories that don’t fit, less polished stories, we want a rawness.” Clifton Gachagua says, “If you want the most experimental writing in Nairobi, then get Manure Fresh, the book.”

The book has a title of its own, Going Down Moi Avenue (a reference to Going Down River Road by Meja Mwangi). The first issue featured a story written entirely in Sheng, the local mixed language—part of the general impatience with writers who focus on the needs of Western publishing. Ray’s own story was about an underground club that you find by searching for clues and messages around Nairobi. You will have to come to Nairobi to read it, however—it’s available only in hard copy.

Ray’s a current co-host of the World’s Loudest Library, an organization that has in the past been headed by Alex Ikawah and Clifton Gachagua.

“WLL is the mother of Manure Fresh that grew out of our answers to questions that came up during a particular WLL. WLL is a question party. It’s a community. It is the World’s Loudest Library because through the book swap and book drop movements, we are visible and discovered. We hope we have the world’s largest roving library. It’s a party more than a club, we commune with our questions and homegrown music. We are working on a sound system.”

A slideshow about WLL and related book exchanges can be found here.

Ray’s own fiction overlaps with the horror genre but plainly owes a lot to African traditional beliefs.

“Mom used to tell us stories that my grandparents told her. I think she felt there was a void to be filled—her parents had died… They had told stores with mystical or magical elements. Kikuyu folk stories have a lot of ogres. Oh God I used to be so scared of them, I would even refuse to eat. And Mom would say— ‘and you, you will finish your food.’

When I was seven, we moved from Nairobi back to a village twenty miles away. It was a rural setting with rural dynamics—if you get no rain it is because your village is cursed. I heard older stories, random stories that have influence on how I see things, directed a lot of my writing and thinking. A story of mine, “Witnessed The Sacrifice” about a little girl waiting to see a monster that comes to cleanse the village every five years. She could warn other girls; she knows it is coming, but she doesn’t because she wants to see it. That story is basically set in our village. There were many things that ruled the place we lived that if we talked about, it would be bad for the gods, bad for my grandparents.”

But the implication is that the monster is also in some way her daddy, preying on village girls.

African SFF can seem to be a boy’s club at times—which is strange when so many of the writers who have had the biggest impact in African speculative writing are women: Nnedi Okorafor, Sofia Samatar, Lauren Beukes, Helen Oyeyemi, Nansubaga Makumbi, or Chinelo Onwualu who also is co-founder of Omenana magazine.

Ray started out as a poet and for a while wrote nothing else. “I think I feared exploring ideas further—keep it simple and vague so no one can ask too many questions. But I found there were stories that needed to be told that couldn’t be told in poetry.”

She started writing prose fiction four years ago, short, almost flash fiction length pieces “that really fit into each other and have a quality that is similar.” She has enough stories now to fit into one project, “about how the past influences the present, and our inability to detach ourselves from the past. Some cultural ties can’t be broken.”

Most of Ray’s early reading was by Kenyan authors—YA books by Marjorie Oludhe Macgoye, or Grace Ogot, or the “Moses” series about a boy in Kenya by a white author whose name escapes Ray. “I also loved The Bride Who Wanted A Special Present by John Osogo.”

“The best comic I read in my childhood was Akokhan by Frank Odoi. It was brilliant. It took supernatural elements from folklore and used it in something like a Marvel comic.” (More information about Frank Odoi and Akokhan can be found here.)

“I’m still exploring, finding a voice and finding stories I want to tell. I’m no longer scared to explore.”

When I saw Ray again later in the year, October 2016, she was delighted to tell me about a series of launch events for her volume of verse, Breaking the Epitaph.  It turns out that she lives on a kind of urban farm on the outskirts of Nairobi, an old family house and that she grows most of her own food.

Like Loading...
© Copyright 2017 By: Geoff Ryman
About Geoff Ryman
Geoff Ryman is Senior Lecturer in School of Arts, Languages and Cultures at the University of Manchester. He is a writer of short stories and novels, and science fiction and literary fiction. His work has won numerous awards including the John W. Campbell Memorial Award, the Arthur C. Clarke Award (twice), the James Tiptree Jr. Memorial Award, the Philip K. Dick Award, the British Science Fiction Association Award (twice), and the Canadian Sunburst Award (twice). In 2012 he won a Nebula Award for his Nigeria-set novelette "What We Found." His story "Capitalism in the 22nd Century" is part of Stories for Chip, edited by Bill Campbell and Nisi Shawl and published by Rosarium.
One comment on “Ray Mwihaki”
Strange Horizons - A little bit of Nairobi does you good By Geoff Ryman

[…] night in Nairobi I’m with a group called The World’s Loudest Library co-hosted by Ray Mwihaki, whom you are going to meet. WLL is a book swap club, a book discussion club, and a discussion club […]