Deoxy Diamond is a Brazilian illustrator, working with digital art, currently centered on character design. A science fiction and Afrofuturism fan, they like to mix folklore and black culture in their art. Find their work at Artstation, Instagram, and Twitter.

Deoxy provided the illustration for the January 20th story “One Hand in the Coffin,” by Justin C. Key. 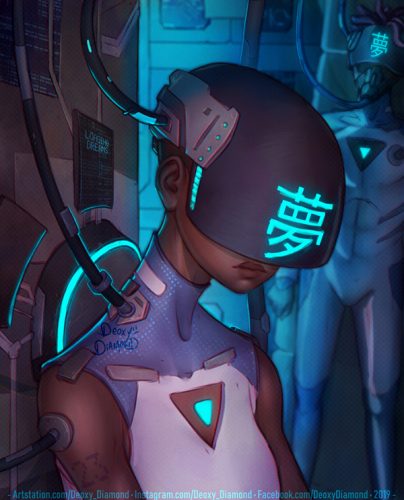 Did you always like to draw? What is your history with art?

Well, I believe that most people used to draw when they were kids, but I never considered following this “vocation” until a difficult time in my life when I realized that my art hobby helped at times of personal hardship, and I haven’t stopped ever since.

Your work is mostly digital. Do you also enjoy traditional art? How is your process with digital illustrations?

I started with traditional art focused on realism in 2014 and 2015, and in the beginning of 2016, I shifted to digital art. Nowadays, my process begins with the idea: I write it down and doodle it on my sketchbook so I don’t forget it, then try to make it work, thinking of the colors, and if I want it to be flatter or more rendered.

Afrofuturism is one of the central themes of your art. What inspires you the most in the genre, both in Brazil and other places?

Unfortunately, I don’t know many artists in Brazil that work with this theme, but one of my greatest references is Anderson Awvas. Even though most of his art is traditional, I love the way he envisions Afrofuturism. In other countries, I like Malcolm Wopé and Terence Ntsako Tako Maluleke. 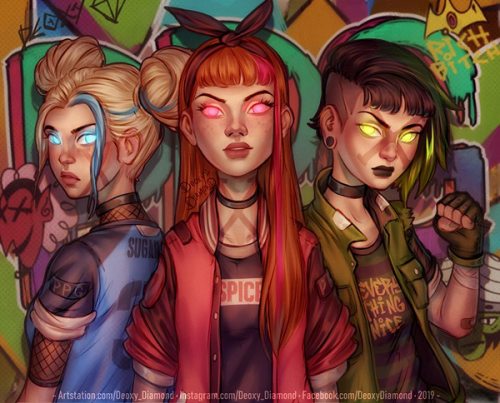 “The PowerpuffGirls” © 2019 by Deoxy Diamond

Which other artists influenced you the most? What are your artistic references?

My greatest references are artists like the ones I mentioned above, and others like Alexandre Botelho, Michael Toney, Mau Lencinas, Jeff, Sapo Lendário and Limetown. Other inspirations include urban art and graffiti, Japanese street fashion, and science fiction.

You also do fanart, like your recent redesign of the Powerpuff Girls. If you could choose a TV series, book or movie to illustrate professionally, which one would you choose and why?

I think I would like to do the cover for Static from DC, or Spider-Man: Miles Morales. I would also love to do video game concept art for League of Legends and Overwatch, or redesign the characters for a reboot of animations like Powerpuff Girls and Codename: Kids Next Door. 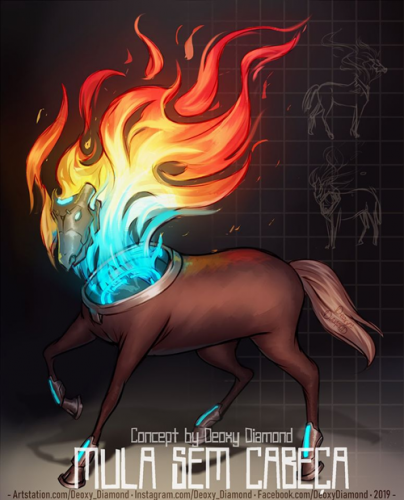 You have a series of illustrations where you reimagine classic characters of Brazilian Folklore in futuristic scenarios, such as the Headless Mule and Saci Pererê. Can you tell us more about it?

This project is something I always wanted to do but didn’t have the chance to develop a theme until now. I love the idea of representing folk stories and showcasing the culture of my country in a different way, but I only started learning more about it after following the channel and page of a friend of mine, Folclore Brasil, and then the series began. Video games like Overwatch and League of Legends have been my biggest references for the redesigns.

Recently, I was part of an anthology called “Vislumbres de um Futuro Amargo” where I illustrated a Science Fiction short story, and the book is currently being crowdfunded on Catarse. I also intend to continue my series of Cyber Folklore illustrations on my social media. 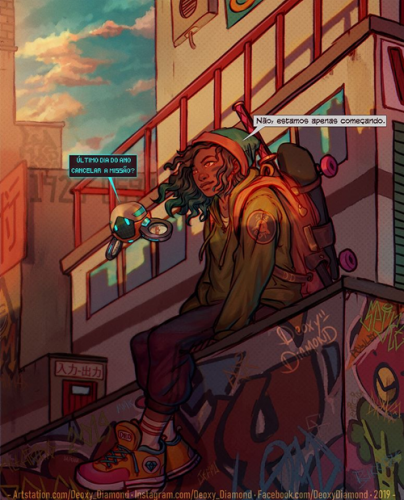 Like Loading...
© Copyright 2020 By: Dante Luiz
Art by: Deoxy Diamond
About Dante Luiz
Dante Luiz is an illustrator, art director for Strange Horizons, and occasional writer from southern Brazil. He is a two-time PRISM Awards finalist with work featured in anthologies by Toronto Comix and Margins Publishing, among others. Find him on Twitter or his website.
No comments yet. Be the first!