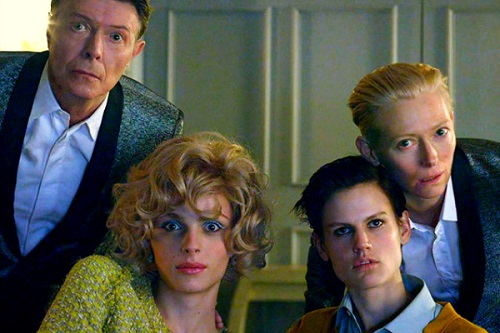 In David Bowie's most recent music video for "The Stars Are Out Tonight," directed by Floria Sigismondi, he and Tilda Swinton play outwardly content suburban marrieds whose darker sides emerge in the fantastical faces of their rock-star mirror-selves, undergoing a mutation from the conventional to the alien, and confronting the transformative trap (and trappings) of fame.

In some ways, the piece is a tidy encapsulation of Bowie's work as an SF filmmaker. The music video as an art form is firmly established in the cultural canon, its performative surrealism a cinematic vocabulary all its own, and a music video is at its core an inhabitant of the same science fiction universe as musical numbers, in which inter-narrative disbelief is suspended for the length of a song that can be anything from a world-building anthem to a heart's cry.

Over Bowie's decades in the field, he's amassed a diverse body of work, and many of his traditional music videos have become iconic in their own right (including the Technicolor "Ashes to Ashes," and the controversial "Day-in Day-out"). But he's often collaborated with directors and other artists on more cinematic works than the standard, so that the song is essentially scoring a conceptual short film just as much as it's showing off Bowie's lip-synching skills. And it's no surprise that many of these are suitably speculative (you'd expect no less from Ziggy Stardust), and that their themes not only reflect those of his music (alienation, frustration, and loss), but make use of cinematic language to explore doubles, the tension between life and art/private and performance, and the futile struggle against the pressures of the world, four minutes at a time.

“Look Back in Anger” (1979, produced by Bowie, directed by David Mallet). After an early music video career of delightfully low-budget synch-alongs in character as Ziggy Stardust, Bowie made a significant artistic departure here, in one of his earliest narrative videos. In it, an artist struggling to paint an angelic figure struggles with the work, only to realize he's slowly transforming into the painting himself; in desperation, he paints over his face in the mirror, but it's too late, and the art wins. This reverse Dorian Gray has a notable lack of a performative element. This art is more introverted; undisplayed, and incomplete even as it overwhelms its maker.

By 1984's “Blue Jean,” Bowie was going full-throttle with the idea of a story—the MTV-friendly version of the video was actually a pared-down cut of a twenty-minute short film ("Jazzin' for Blue Jean"). The narrative features deliberate and extended doubling: Bowie is both the gormless businessman out to impress his date, and the performer Lord Byron, who, to no one's shock, wins the girl. The inherent comedic value of dorky-date Bowie aside, there's a streak of cynicism a mile wide running through the center of the film. The theatrical Lord Byron, who appears hyper-performing both to the crowd and the camera, is the undoubted choice our heroine will make, purely because of this performance, and while the full film offers more context for the decision, the music video distills this triangle to the salient points: glamour 1, real life 0.

And if you wanted a music video that's 100% cynical streak, look no further than 1993's "Jump They Say" (dir. Mark Romanek), a four-minute ode to heartless futures and rooftop posing (and a hat-tip here or there to La Jetée). Bowie, once again donning corporate drag, strides through a clinically clean dystopia that fascinates, traps, and ultimately destroys him through forced assimilation via constant observation. Besides the proliferation of helmeted women flickering on screens and peering through telescopes, his in-narrative singing happens behind police glass in an interrogation room as two men look on grimly. Interestingly, his ultimate demise (after a brief and futile struggle for escape) seems to bring together a group of strangers who seem well aware of what they've lost, an ambiguous and ambivalent comment on fame.

More meta yet is Bowie's 1997 "Little Wonder," his first music-video collaboration with Floria Sigismondi, and their earliest outing into the aesthetics of flexible frame speeds and the doomed innocence of the preternatural. The Little Wonder in question—an alien with more than a passing resemblance to Ziggy Stardust—wanders a city amid increasingly nightmarish inhabitants; it's revealed that the alien (who has, it's suggested, aged into Bowie) was abandoned on Earth to fumble his way through a life. Though more traditionally music-video in its framing (it provides no in-story audience for Bowie's direct-address singing, and these moments take place at a geographic and narrative remove), this is without doubt a story—of Bowie in conversation with his own long-lost persona. Alienation, the trap of curiosity/abandonment, and the ubiquitous gaze are everywhere; it's no coincidence that our visitor quite literally can't call home, or that in the moments of direct address, he's gazing through the bellows of a camera.

And later in 1997, Bowie teamed with Dom & Nick for “I'm Afraid of Americans,” a video whose narrative—relatively linear, and centered on doubling as a symptom of the loss of mind—hews remarkably close to "Look Back in Anger," despite the difference in narrative. In the video (more political and literally illustrated by the lyrics than many of the others mentioned), guest artist Trent Reznor appears as Johnny the American, pursuing Bowie's protagonist through the streets of a city rife with half-imagined crime. As Bowie tries in vain to escape the destructively violent (and devout) Johnny, he becomes unable to distinguish what's real, until at last, amid his terror, he resigns himself to Johnny's omnipresence, in one of Bowie's darkest endings yet.

It's interesting to note that Bowie often seems to have a certain distance from his own work, whether musical or visual. He often engages with ideas of performative versus private identity, but uses his own past personas as examples of the consuming and dangerous nature of fame, a running commentary on both celebrity and his own missteps, but one that isn't afraid, every so often, to acknowledge the absurdity of the entire enterprise.

Of course, with a body of work this large, we're working inside a numbers game, and not all of them are high-art, or even good (there is a long list that could go in this parenthetical, but if you didn't expect that "Dancing in the Streets" would be here, you have never seen "Dancing in the Streets"). But "The Stars Are Out Tonight" makes a fitting entry in the filmography of a musician who's spent a lifetime in character, looking at the way the world looks at him.