Reviews
Size / / /
M Archive: After the End of the World by Alexis Pauline Gumbs
By: Maya C. James 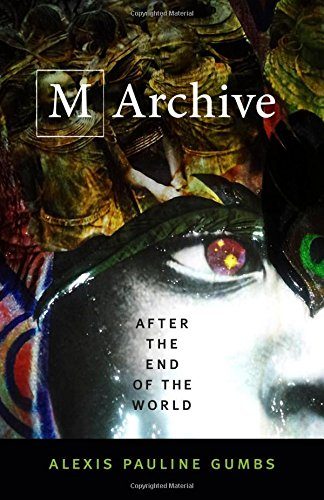 Dr. Alexis Pauline Gumbs’s most recent poetry book, M Archive: After the End of the World, is a strange, post-apocalyptic mash up of Janelle Monáe’s Dirty Computer, Haruki Murakami’s Hard-Boiled Wonderland and the End of the World, and Max Brooks’s World War Z. This is perhaps the most helpful and concise explanation I can offer for such an intriguing and experimental poetry collection (the second of her experimental triptych after Spill: Scenes of Black Feminist Fugitivity, with a third on the way). M Archive is a truly original piece of work that is difficult to pin down—and perhaps it shouldn’t be. It is an oral and scientific history of black feminism and blackness after the end of the world, and exists outside any conventional literary form.

wherever she was there was space and ancestors (p. 80).

M Archive breathes, mourns, and roars, alive with alluring voices and journeys that bubble up from the bottom of the ocean and the edge of the universe in jarring, unexpected ways. There is a comfortable rhythm of pessimism and optimism throughout the text that suspends readers in between discovery and horror, especially when describing a future for unprepared people.

they thought they were tasting the future (which for some people/ tasted like cardboard and for other people tasted like sugar), but/ they were not… the only ones who made it had a direct connection to those women (p. 48).

Although the poems could easily have been read out of order, I began with the first (and my favorite) section of seven: “from the lab notebooks of the last experiments.”

There are no main characters or entities to follow throughout this section (or any other section), but many of the perspectives are refreshingly, and unapologetically, black. “they began to study the death of the black artist. Strung out the veins/ on tables to dissect them. Looking for the impact of ink, early morn/-ings, and that repeated refusal to be silent …” (p. 14). This poem, labeled in the endnotes as “when things suffer premature death, they never concede to being put to rest” (more on the titles later), is not the last poem to describe the methodology of disaster. “when they came to the planet looking for traces of the humans we/ had been, all they found were these round and gleaming stones …” (p. 13). In this poem, the gleaming stones are gallstones and pearls that serve as artifacts of pain from a lost society of black innovators and artists. Pain in black communities runs the gamut of being overstated, or, more often, understated, and this radical Afrofuturist reflection is one of the many aspects of her writing that makes this text so innovative.

This section also details one of the many modern, micro-apocalypses that lead to the end of the world: the mining of melanin. “and then there was the melanin. long after the artists learned to/ full body tattoo their skin every color of the rainbow, the melanin/ started to matter more. again… even dominicans started putting dirt on their faces” (p. 15). Much like micro-aggressions, these micro apocalypses are not immediately devastating, but dangerous when left to fester for too long. Gumbs is not afraid to point a finger at the guilty, and I enjoyed her oscillation between righteous anger, solemn reflection, and everything in between.

Although M Archive speaks to apocalypses of all sizes and impacts, Gumbs never lingers too long on disaster, and leaves room for healing spaces in her familiar and imagined societies. From the section “Archive of Fire: Rate of Change”: “they began to acknowledge their foremothers as the daughters they always wanted to have./ they started being, just being, the mothers they had always wanted/ to be …” (p. 102).  This tasteful examination of generational memory persists throughout her work, but Dr. Gumbs delves most of her attention to various themes of biopolitics of black bodies. As an educator (she runs a summer workshop called Eternal Summer of the Black Feminist Mind in Durham, North Carolina), Dr. Gumbs is eager to  cultivate reflection and understanding in her audience—themes range from the modern race politics of the Dominican Republic to the Middle Passage and lesbian black feminist metaphysics (or in other words, reimagining the universe through a feminist lens). In fact, each poem ends with an endnote referencing M. Jacqui Alexander’s book, Pedagogies of Crossing: Meditations on Feminism, Sexual Politics, Memory, and the Sacred, which is described as an “ancestrally cowritten text.”

Although Gumbs’s poems occasionally cite tangible feminist and Afrofuturist authors like Audre Lorde and Octavia Butler, the geography and timeline of her poems are difficult to map. Her foreword, “A Note,” clarifies her purpose somewhat. “This book offers a possibility of being beyond the human and an invitation into the blackness of what we cannot know from here. In other words, this speculative documentary work is written from and with the perspective of a researcher, a post-scientist sorting artifacts after the end of the world. This is you beyond you” (p. xi). Even as a black woman I had utterly no idea what she was talking about, but with such a compelling and confident introduction I sure as hell wanted to know.

The premise of Gumbs’s work may seem intimidating, but she sticks to more traditional formats to compensate for the radical text (there is no strange indentation, formatting, etc.). I never quite figured out her purpose in capitalizing some names and not others—perhaps it was to elevate the black feminist thinker, but this was lost on me and did not make any meaningful impact. I was initially uncomfortable referencing endnotes to gain a deeper understanding of the poetry (endnotes are an unfortunate reminder of my extensive readings for my classes), especially without the guidance of the M. Jacqui Alexander book. In my initial reading of the book, I ignored them, but was glad I used them after reading the book a second time, since this is where Gumbs offers additional sources and the titles of her poems. Not every title clarified her thought process, though, and flipping between the endnotes and the poems did not make for a particularly pleasant reading experience.

The organization of the seven sections, while engaging, is not particularly helpful for organizing these thoughts, or for helping readers understand where they are in such an experimental book. Four of the sections begin with a blacked-out image of the periodic table that corresponds with natural elements of life: dirt sky, fire, and ocean. For example, the “Archive of Fire” section is prefaced with a blacked-out periodic table that only shows hydrogen, nitrogen, helium, neon, and iron. The other three sections, “From the Lab Notebooks of the Last Experiments,” “Baskets: (Futures Yet to Be Woven),” and “Memory Drive,” do not follow any particular theme, but are structured similarly to the other poems.

Gumbs also tackles themes of blackness, anti-capitalism, black feminist theory, science fiction, historical revision, African mythologies, and more. As stated in both the marketing and foreword of this work, M Archive is academically interdisciplinary, and “post-scientist” in that it is far removed from any timeline of history and academia that we are familiar with. I enjoyed the academic angle for the most part, especially when she described a methodology for discovering the remains of an already destroyed people. Unfortunately, it lacks focus at times and to understand it requires more labor than the reader is necessarily going to put in. Although part of her aim is to clarify these aforementioned theories, some poems read more like confusing lectures than poetry. Perhaps this problem can be alleviated by referencing M Jacqui Alexander’s book, but I am not willing to, or able to, purchase a supplementary textbook to understand a few poems that should be self-explanatory.

Luckily Gumbs leaves readers with a mountain of supplementary sources (over 115 additional sources) in her endnotes that had an “elemental impact” on M Archive. These sources include work from Nnedi Okorafor, Derrick Bell, Boyz II Men, Childish Gambino, and more. The influence of music is particularly pertinent when it comes to her poems that make use of repetition, while the fluid use of pronouns also influences her text. In the poem referenced as “the dead do not like to be forgotten,” the importance of pronouns and repetition are particularly pronounced. “whatever part they burned into air, whatever part they buried/ underground, whatever part they threw in the sea, came whole again/ in every breathing growing thing. and when the warning time came/ they were all of them (all of them) screaming” (p. 75). Gumbs constantly engages the “other” and the unfamiliar. “She,” “they,” and “ancestor” are perhaps the most important words of this collection of poems, as this work is particularly feminist and historical.

but in the end our burdens outgrew our strength (p. 44).

I closed this book with a strange sensation of displacement and exhaustion. M Archive uprooted and surprised me in unexpected ways, and I look forward to more of Gumbs’s work.

Like Loading...
© Copyright 2018 By: Maya C. James
About Maya C. James
Maya James is a full-time student and emerging author. Her work has appeared in Strange Horizons, Soar: For Harriet, and Hello Giggles. She was recently long-listed for the Stockholm Writers Festival First Pages Prize, and is working on her first novel. You can find more of her work here: mayajameswrites.wordpress.com
No comments yet. Be the first!