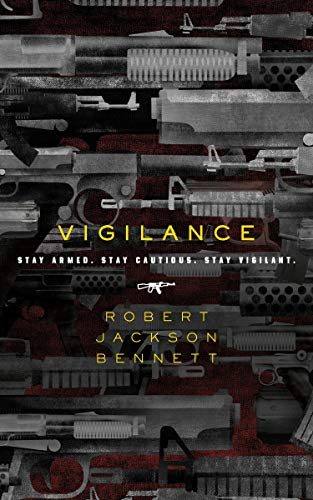 Brian Bilston's poem “America is a Gun” is an understated little masterpiece that makes the rounds every time there’s a major shooting. It’s simple and sad, and I thought about it a lot as I was reading Vigilance. In its near-future America, there has been a mass exodus to any and all the other places it mentions. Most people would rather be in lands of thermal springs and kangaroos than in the land that is only ever a gun. But Robert Jackson Bennett has a slight tweak for the poem: Germany may be an oompah band and Holland a wooden shoe, but America is a man with a gun.

John McDean is a marketing maven who runs Vigilance, the hybrid news report and reality TV show that lets its target demographic experience mass shootings vicariously. Do they want to be the hero? The villain? The bystander? Vigilance makes it all possible. The Our Nation’s Truth network recruits eager would-be shooters, gives them their pick of assault rifles, and then turns them loose in confined settings on unsuspecting populations.

Well, not entirely unsuspecting. Ailing businesses contract with ONT for the chance to get paid if their location is ever chosen as a shooting site. And then anyone who passes through their doors automatically agrees to the terms and conditions. They’re dimly aware of the risks, but not enough to really believe it could happen to them. It’s a not-very-subtle dig at tech companies, but then, nothing about this book is subtle. In fact, it might be the least subtle book I’ve ever read, and I’ve read The Chronicles of Narnia. But I don’t think it should be subtle. We passed the point of subtlety quite a few school shootings ago.

In fact, Vigilance begins with a brief, scathing takedown of the demographics of Vigilance viewers: male, white, aging, straight, blithely sexist, deeply afraid of the unknown. And it goes on as the book goes on: unquestioning supporters of the military who never actually served, mediocre fathers who think they're good ones, and would-be survivalists who have never left suburbia or spent a night in the cold.

Delusional, in a word. These men are delusional. But who wants to educate and improve when pandering is so much easier on the ego? Vigilance chronicles an America wholly enthralled by its own violence, eager to allow corporations to profit from it, and unwilling to address the inequality and climate change that makes escapism so necessary in the first place. It takes aim (pun intended) at everything from Nazi “bad actors” to suburbanites more afraid of brown people than dead children, and never once misses. This is some pointed and deeply sarcastic criticism.

Even though I am on board with pretty much every individual criticism Bennett makes, the overall effect is hyperbolic. I never believed, at any point during my reading, that this version of America would come to pass. To be fair, I don’t think Bennett believes it either. I don’t think Vigilance is meant to be prophetic. However, it comes across as less a cautionary tale and more reductio ad absurdum, the combination of every worst-case scenario into an orgy of liberal fears masquerading as conservative ones. Everyone who works for Vigilance is an opportunist stoking conservative xenophobia and playing on misplaced 1950s nostalgia. Vigilance-the-TV-show wants conservatives to be afraid; Vigilance-the-book wants liberal readers to be afraid of those fearful, reactionary people. Which, I admit, I am. But on the meta-level, this book is itself a piece of media meant to play on the reader’s fear. Fortunately, I think it’s also trying to pull back the curtain on who benefits from everyone being afraid.

In the case of Vigilance, the show, it’s an oil tycoon and a tech magnate who between them also own the ONT network. The oil tycoon, Hopper, holds meetings from a hospital bed, peeling off his oxygen mask to spew homophobic comments interspersed with vaguely business-minded demands to shoot up public transit hubs (oil habits die hard, apparently). The Silicon Valley magnate, Kruse, is equally ancient but better invested in technologies that unnaturally prolong his life, turning him into an automaton of himself. They’re capitalism’s finest monsters, preying on people by convincing them that they need to be vigilant against all threats except the ones they represent: the Frankensteinian amalgam of wealth, masculinity, and whiteness.

Hopper and Kruse bully McDean into adding subliminal tech into the broadcast. Without the slightest inkling of irony, McDean then turns around to bully his staff, and mock the toxic masculinity of his viewers that he himself perpetuates. No one points this out, because everyone has bought in to the model. His office is made up of almost exactly the same people as his audience, men he hired to sit in front of screens and speculate on how to make money from violence. Bennett makes a point of repeatedly describing the pale faces of men illuminated by their white screens. Yes, toxic whiteness is enhanced by the echo chambers of the internet, and race is just as firmly entrenched in this landscape as gender.

No women work at ONT, not even the news anchor who seems to be one of the faces of the show: Stacey Robwright is actually just an advanced AI behind some splashy video editing, no actual woman needed. There are occasional female interns, but McDean clearly sees them as potential hookups and not employees or, god forbid, human beings. And there are certainly no people of color in his office. When McDean hears that an experimental AI meant to improve marketing reach was being illegally tested on prisoners, he is horrified, but only because the target demographics don’t match up. What if the system was calibrated for—gasp—non-whites? How would his numbers be impacted? It’s a caricature of callousness and exploitation, but unfortunately each individual aspect rings all too true.

There is, however,  a counterpoint. Delyna is the rational and reasonable person who knows that a gun without training and education is just a fetish. She also knows, as a black woman, that she’s far more likely to be shot before she could do any shooting, even if she were carrying. Which she isn’t. She refuses to make concessions where she can, in what to most women is a familiar combination of outrage and resignation. “‘You think if I had on a different shirt or some tennis shoes that I’d have a chance? God, Raphael. Trust me. If it happens here, there’s nothing you can do about it’” (p. 13). Rape culture and what I guess we have to call “active shooter” culture overlap in some very horrifying ways: someone, somewhere, is definitely going to blame you for being a victim. Wrong shoes, wrong outfit, wrong preparations, and somehow it's your fault that a man wants to see you at his mercy. [1]

We are led by literary convention to believe that Delyna will be our working-class hero, and that her moral moxie will carry the day against ONT. But really, Delyna knows well enough to stay far away from potential attack sites. It’s up to Phuong Dang, another woman of color, to prove that even winning in Vigilance is still losing. Phuong is one of the people stuck in the mall when Vigilance starts rolling, but even though she has a gun—even though she actually takes down one of the active shooters—she’s not marketable enough to the white audience. McDean knows people don’t want to see a foreigner do what they can’t, and so he makes sure that another shooter murders her soon after.  Meanwhile, Delyna can only watch this unfold on television along with all her patrons, who are betting on whether Phuong and all the others will survive.

Even though she really needs her job, Delyna stands up to the white, gun-toting patrons at the bar where she works by changing the channel. It seems paltry, but even that small act of defiance could be deadly for her in a bar filled with gun-toting drunks. She knows the risks all too well—her own father was killed in the line of duty by “friendly” fire—but absolutely no one else is willing to take a stand. And she survives the encounter because of a lifetime of implicit training: as a woman, she has learned how to placate men, and as a black woman, she has learned how to placate white people.

If this were a YA novel, Delyna would wear her bright yellow shirt as a badge and a symbol, and she and Phuong Dang would lead the new “yellow shirt” teens to storm the ONT headquarters and put an end to Vigilance. Maybe they would even beat the guns into plowshares and repair the scorched earth, and finally give women and minorities a level playing field, so to speak. But this isn’t a YA novel. Bennett makes a point of saying that no one wants to bring children into such a pitiful, blasted country, so birth rates are low and still plummeting. There just aren’t any teens to lead a Hunger Games-style insurrection. Instead we get the “adult” finale, in which almost everyone just dies.

Bennett takes a savage, vengeful delight in presenting this worst-case-scenario ending. It gives voice to that undercurrent of despair running through American politics today, the feeling that says, no, change is hard and anger is free, so just give up and let people deal with the ultimate consequences of their actions. Let it all burn.

And I admit: there’s something satisfying about the bleak, bitter ending. Bennett depicts America tearing itself completely apart under the combined influence of experimental tech deployed by ONT media and its own bloodthirsty greed—turned back on itself by a mysterious saboteur. “You may not think it now, but I work for the American people. I’ve been looking for a way to change things for a long, long time” (p. 180), says this person, who is definitely not an intern. Maybe this is meant to be a moment of genuine, if minute, hope. Maybe we really are supposed to believe that mass murder on the scale of genocide, in which everyone is both a perpetrator and a victim, is the kind of cleansing fire that America needs, and that what springs up from the ashes will be better.

But Vigilance never stops pointing out that what we see and hear is manipulated. Indeed, even as this unknown agent defends the sabotage, they’re also—and maybe only—stalling for time. They just want to keep McDean on the phone long enough for the strike drones to arrive. McDean only escapes because he recognizes the manipulation, being the expert that he is. He flees—and as he rushes to a safer, more isolated place, he watches people gunning down their friends, their children, and random strangers. He never tries to help; he only cares about saving his own skin. At the end of the book, yet again, the last person standing is a rich white man.

It’s maybe the only subtle part of this unsubtle book: that liberal smugness and self-satisfied inaction only reinforces the status quo. That if everyone else does nothing, the people who win are the people who always win: McDean, and probably the über-wealthy Hopper and Kruse, whom we never see die. This is a story born of anger, but written by a mature author who knows that even the darkest satisfaction is not, in the end, the same as a solution.

[1] Lest anyone find some disingenuous ground to stand on in order to shout, “What about women with guns!” yes, this is addressed. There is a woman, just as white and ineffectual and ignorant, with a gun. [return]