Today, I am going to listen to a radio play called The Jewels of Kali from The Hall of Fantasy! Once upon a time in my little youth, I watched Indiana Jones and the Temple of Doom. And lo! there was Kali and I was like, "yay religious representation in a mainstream movie!," but I didn’t actually say that because I was like 8 or something—but then someone got his heart squooshed and people were eating monkey brains and everyone was like, "oh my god do you eat monkey brains too?" and I was like, "what the fuck Indiana Jones!" Years later, I am fascinated with how people are fascinated with Kali. My illustrious acquaintance wanted to know why Jesus never appears in fantasy stories like Kali and various "exotic" deities do, which is such a racist thing to say, I can’t even. I apologise for my racist friend and while I will not actually cut ties with him over this, I will definitely speak to him a lot less and gaze coldly but meaningfully at him from time to time, to really drive the message home. 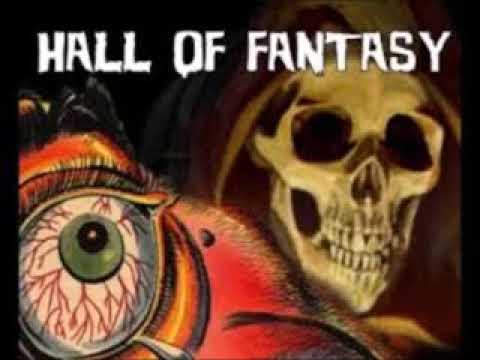 Ok, let’s get this started because no one is here right now, and it will be so embarrassing for me if someone heard me listening to this. Take it away, Kali!

The Jewels of Kali from The Hall of Fantasy (June 1953)

We are going on a trip into the supernatural! With some dude!

Someone is screaming now

Something has happened to Sheldon!

Now some other dude, probably not Sheldon, is saying something to Kali

He’s using that weird inflection people resort to when dealing with non-English things. Like saying peace they shall not have

One by one shall they die

Someone just said KAAAALEEEEEE like really I’m not even kidding

Now some dude (so many dudes in this story wow!) is saying some other dude called George? Idk, anyway he invited them to a cabin on the lake. This is not so interesting

Who is the dude who is not George!

Kettridge in front of an auto!

Kettridge and the auto driver!

Anyway they are headed to the cabin now

The Storm of Incredible Coincidence looms darkly above them

I don’t think you can write a story like this without including a storm that looms darkly above everything, I think something happens to you if you don’t

So this dude, like the first one, not Sheldon who is dead but the other guy, the one who is not George, is Lloyd. In case anyone was interested

Lloyd has met Kettridge once. And yet he is tootling down with Elaine under the dark bosom of an impending storm to see dude’s India pics

It must have been a first meeting fraught with emotion

Lloyd doubts if Kettridge will remember him.

This should be a fun get-together

Well we wouldn’t have this great radio program. Or colonialism. And who doesn’t like colonialism!

Ok it seems like members of the expedition have been dying off and now there are only two people left.

Maybe it was all that Indian food! Or the lack of toilets! HAHAHAHAHAHA

So glad I was able to work those in

How come curses always follow these expeditions and not rabbits? Or lemmings. Or large pieces of fruit

The storm of incredible coincidence has broken and a dude is saying they apparently are going to meet Death up there in the cabin. I think we can all agree that a great time is going to be had by all

They have arrived at the cabin and look! It’s George! HAI GEORGE!

The dudes are making plans to go fishing. And they are having coffee. Like that previous thing, this is also not that interesting

What is a lost temple anyway? Who lost it? And if they found it does it mean it’s still lost? Or no?

Something just howled I think so a dog

Apparently there is a curse on anyone who defiles the lost temple of Kali. WELL DON’T DEFILE IT THEN GOSH

They took Kali’s jewels and are like yeah nbd wtf

Is it supposed to be funny when they do that?

Elaine quietly said that she didn’t think that sound was a dog and Lloyd said calm down, calm down DON’T GET HYSTERICAL ELAINE GOSH

The other guy, the one another one who died just now, gave Kettridge his share of the jewels because he thought maybe that way he wouldn’t die

Kettridge says he’ll probably be dead in the next few hours. Good to know!

Kettridge is now going to tell us everything that happened

Again with this fellow—KALI ISN’T HERE

What if he’s actually saying Molly? Or Ollie?

Oh this is where Sheldon dies HAI SHELDON BAI SHELDON

It should be Fancyguy obviously

This guy shouting Ollie all the time is super annoying wow

Oh that’s apparently the cry of the priests of Kali! Who knew!

They found some rope!

Google wants to know if I mean Fan Cigars

It’s the sacrificial rope of the priests of Kali!

WHAT DOES THAT EVEN MEAN

Now they have seen a statue of a woman with... forearms?

Now a lady is saying Kali comes for you

Is it Elaine? HAI ELAINE

They have decided to get to the cars and run away

Woah did he just shoot someone?

No he simply shot for fun I think

Is it weird that this guy is holding people at gunpoint so that he doesn’t die alone at the hands of Kali and/or Kali worshippers?

What am I even saying

They just called Kali the thing—THAT’S NOT VERY NICE

“It’s outside the door.”

Super rude to keep referring to Kali as ‘it’ imho

Please kill someone so this can be over

What the actual heck

Despite feeling “that way” about “these kinds” of shows, there have been a few that I enjoyed like anything because let’s face it, sometimes stories like this are just more fun than they are problematic. This was not one of those shows. Also super disappointed that there were no ads to encourage me to smoke or polish my floor.