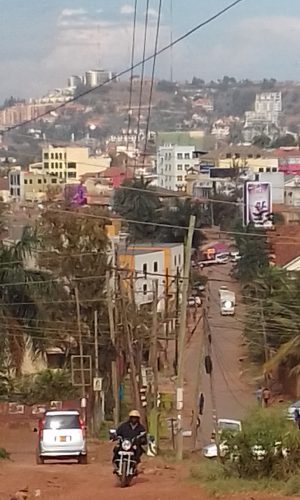 For a fan (like me) of the novel Kintu, being in Kampala was a little bit like seeing the Mona Lisa. Yes, it is as described—overwhelming, with wonderful vistas that come from being a city built on hills. The hills make the banks of trees taller—they loom overhead. Ten-storey buildings tower in mist like visions of the future. There are slums, but they are hard to get to. Much of the central area is modern and calm, with luxury cinemas and pleasant cafes.

Entebbe airport is roughly a 90-minute drive away, near to Lake Victoria. The road from Entebbe features the most luxuriant African landscape I’ve seen, a lush, deep-grass green for mile on mile.

I would describe Uganda as calm and graceful. I suspect that the continuity of the Buganda kingdom since the 14th century contributes to the city’s feeling of stability. A sub-national kingdom, it was abolished for a time by Milton Obote, but was restored in 1993. Its people, the Ganda, form about 17% of the population. The Kingdom gave its name to the nation as a whole, via Swahili and British mispronunciation. 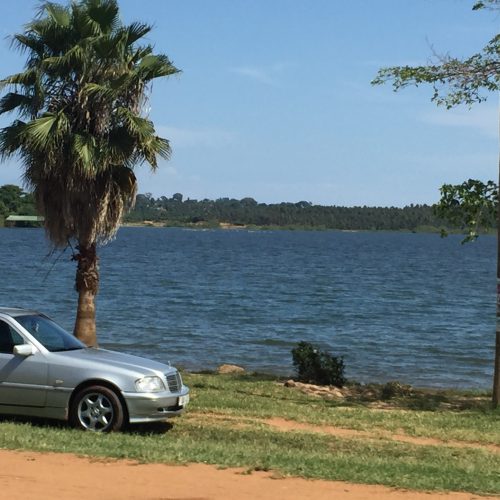 Other key peoples in Uganda are the Acholi, Langi, Alur, and several smaller ethnic groups who are about 15%, and whose language is closely related to duLuo in Kenya and Tanzania. In the west are the related peoples of the lake area, of the Bunyoro, Batoro, and Banyakole kingdoms, which are themselves ethnically complex.

As in Malawi, local leadership makes a huge difference in the on-going social process that is literature. FEMRITE, based in Kampala since the 1990s, has been empowering women writers and all writers. It can’t be an accident that 20 years after FEMRITE began its work there are so many empowered, skilled women writers in Uganda. For twenty years, the organization was directed by Goretti Kyomuhendo, author of the acclaimed novel Waiting. 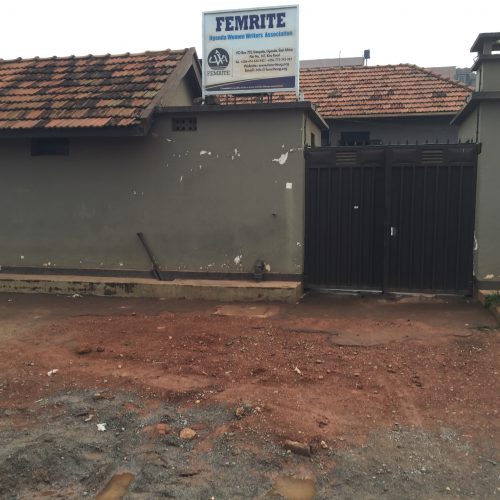 Another local leader is Dilman Dila, who frequently works with FEMRITE and whose literary-SF movie Her Broken Shadow was featured in the Nairobi chapter of this series. He started a literary magazine and runs workshops. Finally, Writivism is a local yearly meeting of writers that gives prizes, runs workshops and encourages local talent.

As for the fabled hatred of homosexuals in Uganda, the laws and sometimes their enforcement are draconian—the 2017 Pride celebration was thwarted. But my experience of meeting young writers across Africa is that they have an enormous awareness of gender and sexuality issues. It is almost the signature issue that separates the current generation from their hard-working, conservative parents, a kind of badge of honour. Working for Pride in Malawi, being a feminist, or supporting gay rights seems to be almost standard. Novelist Zukiswa Wanner told me over a Nairobi lunch that at an event celebrating Africa 39 (an anthology of young African writers), a welcoming Nigerian dignitary urged the gathering of writers not to help import homosexuality from the West—and was mystified when they began to laugh.

If you are a North American and have not visited a country in Africa, it is unlikely that you have been given a single, accurate, balanced impression. When you do visit, prepare to be surprised.

Like Loading...
© Copyright 2017 By: Geoff Ryman
About Geoff Ryman
Geoff Ryman is Senior Lecturer in School of Arts, Languages and Cultures at the University of Manchester. He is a writer of short stories and novels, and science fiction and literary fiction. His work has won numerous awards including the John W. Campbell Memorial Award, the Arthur C. Clarke Award (twice), the James Tiptree Jr. Memorial Award, the Philip K. Dick Award, the British Science Fiction Association Award (twice), and the Canadian Sunburst Award (twice). In 2012 he won a Nebula Award for his Nigeria-set novelette "What We Found." His story "Capitalism in the 22nd Century" is part of Stories for Chip, edited by Bill Campbell and Nisi Shawl and published by Rosarium.
2 comments on “Introduction: Meeting Kintu's Children”
Strange Horizons - Denise Kavuma By Geoff Ryman

Thanks for sharing.I found a lot of interesting information here. A really good post, very thankful and hopeful that you will write many more posts like this one.