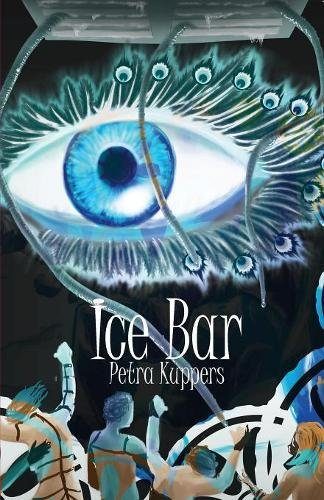 Ice Bar is the first speculative short story collection from noted academic and disability activist Petra Kuppers, the author of many volumes of nonfiction. Ice Bar was released by the small press Spuyten Duyvil, and most of the stories also originally appeared in smaller SFF or literary venues—with an exception being the titular “Ice Bar,” which originally appeared in PodCastle. Upon that first publication, Podcastle asked me to introduce this story, and, when the collection came out, I was happy to receive a reviewer copy from the author.

I feel “Ice Bar,” also the first story in the volume, represents the strengths of the collection well. It takes a postapocalyptic situation and tackles it with the sensitivities of a queer and disabled point of view, and it also offers striking imagery of technology interacting with the body. We find all these themes winding throughout the book, and also an engagement with water in all its forms. As a queer disabled person myself (though of a different background than the author), I was glad to see these particular intersections explored—and explored with very strong and mature prose that dares to venture into the poetic, as for example in the story “Rocket Launch”: “She quickly stepped back as the salt water burned its way through the bandages that covered her lower left leg. Nerves tingled, eagerly grasping for sensations in the seedbeds of scraped skin” (p. 102).

Petra Kuppers notes in the afterword that many of the stories were written while the Dakota Access Pipeline protests were being highlighted daily in the media, and that this served as an inspiration, combined with local Anishinaabe demonstrations: “In Ice Bar, I explore connections between women and water in multiple ways, while trying not to appropriate stories outside of my own cultural circle” (p. 175). Instead of bringing in Native stories and tearing them out of their original context, Kuppers examines white Western cultural elements and applies a “queer/cripping” transformation (p. 174). We get to see the Little Mermaid and selkies, tentacle monsters evoking Lovecraftiana and cosmic horror, Vikings and Nordic myths (the author is a German immigrant to the US). The collection worked best for me when  this approach was applied at its most consistent.

These retellings are never rigid, and I did not feel while reading that Kuppers had a pressing need to adhere closely to the source material, as I feel with some retellings—to the contrary, these approaches struck me as daring and strong, very embodied and self-assured. I was also glad to see the occasional discussion of how white characters felt discomforted and unrooted in a modern American context, and were struggling with their cultural past, especially in relation to slavery. If anything, I felt this could have been more explored. There are very few stories by white authors that dare to engage with these hard topics, and it was clear to me that the author had given them thought. For example, in “The Libation Ceremony,” Dana, a white, physically disabled woman visiting an island in the Southern US, finds that the signs of plantation slavery still linger everywhere, including in the nature around her. A turtle appears with a shape reminiscent of a human skull on its back, and even “the mosquitoes bloom around her, blood penance” (p. 160).  Dana is a visual artist, and she finds that her drawings take on a cast reminding her of the brutality of the Middle Passage. The story leads up to a resolution where Dana and another white woman quote a Black woman in an “awkward” way (p. 165)—the quote is real and is from the Gullah/Geechee leader Queen Quet, who is named in the story. I appreciated seeing the characters struggle to repent and act with honor, but I also felt that not everything needs to have  a satisfying resolution. Some things are irreparable. An awkwardly performed ceremony need not bring spiritual relief, as it does here: “They did not know if these were the right words to honor the dead, the gulf between. But on the thirsty ground, the sweet water found its way into the earth” (p. 165). Still, I felt that this was at least part-way an issue with Western storytelling tropes, according to which every story must have a resolution and endpoint, and was glad to see both the exploration of the topic and the difficulty of facing the past—a past that reverberates through the present.

But the racial and ethnic aspects of this book sometimes still sat uneasy with me, and this was my biggest issue with the collection. Often I felt that there were small details that should have been noticed and removed by an editor. The publisher is not from the SFF field, which could explain why othering racial descriptions which have been quite extensively discussed in English-language SFF in the past decade still remain in the text: for example, there is a repetition of “chocolate skin” across multiple stories, which I found jarring.

I do not want to overemphasize phrasings which can be removed with a line edit. But I felt there were on occasion matching structural issues in the stories which could not be resolved so quickly. Often the characters of color were there to help or comfort the white characters. Possibly the most salient example of this tendency can be found in the story “Dumpling’s Pillar,” in which the protagonist of color, and point of view character, explicitly states that her role is only to help a white person: “I had delivered her here, safely, and that was my part of the story” (p. 55). Sometimes, though, the attempt to play with and deconstruct tropes also did not work for me. In “River Crossing,” a white woman uses magical means to cross the US-Mexican border in the direction of Mexico, as part of a reverse oppression-framing in which the border guard is described as a brown man, while a white main character is labeled with an ethnic slur used for Mexican immigrants (p. 124). Reverse oppression narratives tend to obscure very painful present-day realities, especially if written from the point of view of the dominant group.

There were some further elements that frustrated me specifically as an Eastern European Jewish reader living in the US. In “The Viking Ship,” for example, we read: “I have christened the island Sigrunn since I wanted a clean name, an easy one, no kings or explorers. Sigrunn felt so European and princess-like, so light and Vespa-touring, so right for my little spot of heaven” (p. 168). I found the cleanliness associations here quite difficult, because Sigrunn—“Sig-rune,” the name of a valkyrie—is the same word as the Nazi German Siegrune, which was the symbol of the SS. I am certain this association was not intentional, but combined with other remarks—like associating white skin with purity—reading passages like this was personally hard for me: “At last Dana turned. The full moon of her backside was white in the last orange light. It shone with the whiteness of purity, dough for heavenly meals. Above it, the skin darkened in a cowboy’s tan, sun-dark like oil running into old creases” (p. 123). I think a more elaborate engagement with both Anglo-Western and Germanic-Nordic concepts of whiteness would have benefited the stories, instead of attempts to pivot to characters of color—especially since I felt that aspects of a thoughtful interrogating of whiteness were already there, unlike in many other writers’ work.

While Petra Kuppers is highly accomplished as an academic, she is just starting out as a speculative fiction writer—almost all of the previously published stories in “Ice Bar” are from 2017. Even though I had misgivings about the book, I felt that there was also a potential for growth in multiple senses, and these stories had many elements that I found very striking. I have highlighted the queer and disability aspects, but I would also like to mention the detailed discussion of pain, and the complicated intertwining of pleasure and pain in many characters’ lives. This is also a theme that is quite unexplored in SFF, and when it appears, it does seem to happen concurrently with queer narratives—but here the disability aspect was just as much, if not more salient, and these all interacted. In the above-mentioned “Ice Bar,” the machinery of the bar feeds on the clientele to maintain a cold environment, against the searing heat resulting from climate change outside—this feeding is both painful and pleasurable, and the protagonist embraces it voluntarily. In “Rocket Launch,” meanwhile, the protagonist explores her complicated feelings about BDSM and how she enjoys the physical sensations of pain and restriction, even though they remind her of her father beating her when she was a child. In a very short space of just four pages, and all in the context of her searching for a downed spacecraft, we get to find out about the protagonist’s partner passing away, and her injuries—acquired both voluntarily and involuntarily. All this brings to mind classic SF stories, by Bradbury and others, about the melancholy of spaceflight and how it affects people.

Ultimately, I had mixed feelings: the collection unhesitatingly approached some very infrequently explored physical and mental spaces, and I was very glad to see that. Yet I felt an unevenness despite the firm voice, a self-assuredness that comes from spending many years addressing complicated topics—but in different formats. I felt in particular that Kuppers wasn’t always certain just how much to keep to literary conventions and how much to subvert them; how much to leave open and how much to close off. While the above-mentioned “The Libation Ceremony” could have ended on a less firm note, in the case of other stories I felt the opposite, namely that endings were rather abrupt and inconclusive. I will be keeping an eye out for the author’s work in the future, just as I have been doing, but with my hesitations and concerns in mind.

Like Loading...
© Copyright 2018 By: Bogi Takács
About Bogi Takács
Bogi Takács is a Hungarian Jewish agender trans person and a resident alien in the US. E writes both fiction and poetry, and eir work has been published in a variety of venues like Strange Horizons, Clarkesworld, and Apex, among others. E reviews diverse fiction, poetry, and nonfiction at Bogi Reads the World. You can follow em on Twitter at @bogiperson. Bogi also has a webserial, Iwunen Interstellar Investigations.
No comments yet. Be the first!