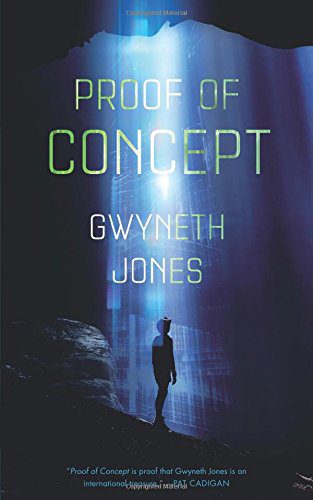 With the first appearance of Divine Endurance in 1984, Gwyneth Jones immediately established herself as one of the most challenging yet significant writers in science fiction, a reputation that was only confirmed by subsequent novels such as Escape Plans and Kairos. Since then she has continued to challenge her readers with richly imagined worlds within which complex social and scientific changes are at work. To say that she is one of the most important writers working in science fiction today is, therefore, an understatement.

Consequently, there seems to be something wrong with the world when we realise that, with the exception of one self-published novel, this novelette, little more than 80 pages long, is the most substantial piece of work we have seen from Jones since Spirit in 2008. For nearly a decade, in other words, we have been witness to the eclipse of one of the writers we should be lauding most loudly.

Yet, when you read Proof of Concept, you can understand why major publishers, their eyes now fixed resolutely upon the bottom line, might be wary of Gwyneth Jones. She does not make it easy for the reader, any more than she has done throughout her career. In an age where so much of what appears as science fiction is safe and familiar, where comfort outsells challenge, her writing is at odds with what is expected of the genre.

In the first few pages of this novelette, for instance, we learn that Earth has suffered a catastrophic environmental collapse. The cities have been abandoned, their ruins now the province of an underclass of scavengers whose lives amid the pollution are inevitably nasty, brutish and short. The majority of the survivors now live in what are called hives, enclosed dystopian habitats forever teetering on the ragged edge of civil breakdown. One maverick scientist, whose most recent inventions have all been notorious failures, has promised an ark that can instantaneously transport people to a pristine new world. She has joined forces with a reality TV entrepreneur, the Great Popularizer as he is known, to extract money from the 1% who continue to live in luxury as the world disintegrates. With this money they have had a model of their ark known as the Needle constructed in the largest subterranean cavern on Earth, and now an ill-assorted mixture of researchers and reality TV stars has been brought together in the Needle. Here they will be sealed off from the rest of the world for a year as a trial run for the actual expedition, while scientists attempt to find proof of concept for the folding of space and time that is meant to instantaneously transport the final ark to another world. Meanwhile, our viewpoint character, Kir, has an AI installed in her brain.

And all of that is contained within little more than 10 pages. Right from the first page the reader has to be running at full pelt just to keep up with what’s going on, and the story hasn’t even started yet. Not that the pace lets up once the seal is in place and the inhabitants of the Needle are locked away from the world. Three of the eminent scientists brought in to oversee the project start die over the space of just a few weeks. Tensions develop between the scientists and the reality TV performers; nevertheless, Kir begins a relationship with one of the performers, until he is brutally murdered. Strange messages begin to penetrate the news blackout, suggesting that the world they left behind has already broken down irrecoverably. Kir discovers that she can communicate with the AI in her brain despite having been assured that this was impossible, and following a clue provided by the AI learns that none of them have been told the truth about the Needle.

It’s a dense and clotted story; in typical Gwyneth Jones style it is full of enough weird concepts and high drama to keep the reader mystified and enthralled in equal measure. Yet it seems to me that it should not be a novelette; it is, rather, a novel that has been compressed and filleted to meet the length requirements for publication in this form. Or if it is not, then some farsighted publisher should even now be persuading Jones to expand this to the length it so clearly demands.

That opening chapter has so much going on that it is almost inevitable that even the most attentive reader is going to miss something, partly because there is a need to keep moving on to the next scene, the next revelation. Startling images and mind-boggling concepts are thrown up in rapid fire order, and are swept away just as quickly. Do you want to know more about how the Needle is supposed to transport its load across space? Too late, the story has already moved on. And in the rush to lay out all of the facets of the world that we need to know in order to grasp why and how things happen the way they do, there are inevitable gaps. The idiosyncratic make-up of the population of the Needle never quite makes sense, there are times when you imagine that a more coherent body would result just from grabbing random passers-by off the street. But there is no time for the how or the why of the selection process, if, indeed, there was a selection process. And what, exactly is the function of the AI lodged in Kir’s brain, given that the Needle seems to be loaded with more than enough computing power that doesn’t need a biological base?

There are similar problems towards the end of the story, where the need to pull everything together to reach a satisfactory climax within the space available means that some aspects of the storytelling are rushed and abbreviated.

In short, there isn’t space for the story to breathe properly. That it works as well as it does despite this is testament to how good Gwyneth Jones is at laying out such complex and challenging stories. And in the absence of the novel length it so patently demands, the novelette is well worth reading. But as you do, the chances are you will find yourself crying: hold on, how did we just pass from X to Z? Or: that’s interesting, I want and need to know more about it. One of these days, if we are really lucky, Proof of Concept will reappear as the novel it should be, and when it does it will join Kairos and the Aleutian Trilogy as the sort of science fiction we should all celebrate.

Like Loading...
© Copyright 2017 By: Paul Kincaid
About Paul Kincaid
Paul Kincaid has received the Thomas Clareson Award and has twice won the BSFA Non-Fiction Award, most recently for his book-length study, Iain M. Banks (2017). He is also the author of What It Is We Do When We Read Science Fiction (2008) and Call and Response (2014).
One comment on “Proof of Concept by Gwyneth Jones”
2017 in Review | Through the dark labyrinth

[…] 19: Proof of Concept by Gwyneth Jones – I reviewed this novella for Strange Horizons. […]