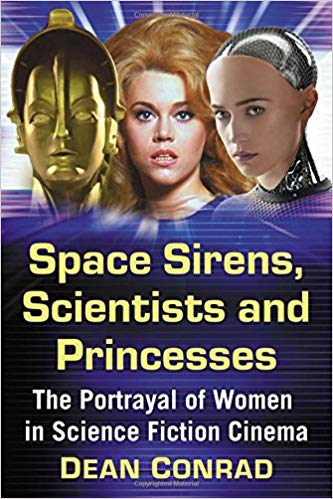 Arguably the oldest science fiction film in the world is La Charcuterie Mécanique, made in 1895 by the Lumière Brothers. The whole premise is invention and sausage, the future of butchery. Four men load a live pig into a box, which miraculously and instantaneously transforms the pig into tasty meat products. It’s certainly an improvement on the slaughterhouses of today, but as Dean Conrad points out, the film doesn’t have any women in it. In fairness, at less than a minute long, it barely has the pig.

This is not to say, of course, that every film, let along every science fiction film, should have women in it. But tracing the role of women characters in the genre—from absence to exploitation to agency and back—is an interesting exercise, linked as it so often is with historical trends and events. In his study Space Sirens, Scientists and Princess: The Portrayal of Women in Science Fiction Cinema, Conrad produces a readable and extremely interesting theory primarily characterised by oscillation. He argues that the evolution of women’s roles in science fiction cinema is not linear, but is instead a complex mix of innovation and pushback. Terms like “progressive” and “regressive” he does not find particularly useful and tends to avoid, because

they are loaded, not least by the question “from whose perspective?” Helen Benson in the 1951 film The Day the Earth Stood Still saves the world, but her social and professional roles as mother and secretary tie her to a traditional representation that was actively used to hold women back in the 1950s. In the movie’s 2008 remake, Benson is a Princeton professor, but she does not get to save the world. Is this “progressive” or “regressive”? (p. 12)

How can that question possibly be answered? Are we to start weighting characters by scale, appointing points for different aspects of their role within a film? If so, how would we go about that? Social and professional expectations for women in the 1950s might have been limited compared to current standards—and those problems haven’t gone away—but plenty of women living today actively choose to be mothers and/or secretaries, and they’ve got just as much right to representation as the rest of us. Are we really going to say, “You’re not a professor at Princeton, though, so more regression points for you.” On the other hand, as Conrad illustrates above, it does look as if in Helen Benson’s case there’s a certain ceiling. She’s pushed up the professional scale, but her role definitely loses some of its narrative impact. This compensation effect is likely not deliberate, but the point is made: change is not linear.

When it comes to representation within the genre—within any genre—change is often problematic. We’ve seen the ongoing debate in speculative fiction over the past few years, the resentful pushback against stories that prioritise the perspectives of marginalised characters. This isn’t a new phenomenon. Instead, it’s one embedded in the cultures of time and place. We’re all affected by it, consciously or not. So there aren’t any women in La Charcuterie Mécanique. I’m sorry to say that my own initial reaction, on reading Conrad’s observations of the film, was: So what? Are they really necessary? What would be the point? And I’ve got a history of both critical and creative writing about food and horror and gender, so you’d think I’d know better. Yet there it is: the buried expectation of default. The idea that diversion from the perceived norm, the prioritisation of alternatives, is something that requires justification.

I’m struck, however, thinking of this pig-and-sausage example, of a more contemporary example. Conrad surveyed over six  hundred and fifty films in writing this study but he didn’t mention LEXX, and it’s not that television or television films don’t get mentioned in this book, because they do. Anyway, the first season, back in 1997, consisted of four TV films, and the first of these introduced the character Zev. Failing in her imposed task of being a perfect wife, primarily due to her weight and perceived unattractiveness, Zev is literally forced into a box (the Lusticon) where she undergoes near-instantaneous transformation into peak sexual appeal. It’s presented as an uncomfortable mix of horror and humour—the Lumière pig goes quietly to its doom, while Zev screams and screams in agony … yet when I first saw it the audience was laughing. Uncomfortably, but they were. You can argue that this process is subverted somewhat in LEXX when it all goes terribly wrong (from the perspective of the Lusticon operators, at least), but the idea of exploitation is surely there.

Interestingly, as Conrad notes, some eras are less focused on the idea of exploitation than others, and this is a trend often driven by historical event. Gender roles were challenged off-screen in World War One, where women had by necessity to take on work that had previously been performed by men. On screen, this new opportunity was reinforced. While roles for women in film during the war did reflect the perennial in-danger-from-invaders trope, they were also, in non-genre films, portrayed as active and useful contributors to national defence. “On the one hand, this was a call to action for the women of Britain; on the other hand, here was a warning to the potential invader: ‘Don’t mess with us—even our women will out-smart you!’” (p. 32). This sense of ability and agency put women front and centre in such genre films as Himmelskibet (Denmark, 1917), Aelita: Queen of Mars (USSR, 1924), Metropolis (Germany, 1927), and Frau im Mond (Germany, 1929).

Surprisingly, this burst of interest in female roles did not recur after World War Two, even though—again—the war brought about substantial change in the professional lives of women. Yet, with the bulk of science fiction films then being made in America instead of devastated Europe, Conrad observed different reactions occurring. “Chapter serials increased, as did the number of U.S. patriotic characters and proxies for conservative masculinity. The result was a continuation of the stagnation that had set in during the second half of the 1930s—and a very fallow period for female roles” (p. 237).

The trend towards innovation and exploration—and science fiction is, or should be, the genre most concerned with these things—is, Conrad argues, a periodic phenomenon, one that is frequently followed by period of a new established norm, and then a falling back towards stereotype as the default reasserts itself. (That default being the stories of men and science, particularly hard science, as Conrad notes that when women do take on the roles of scientists in science fiction films, they are frequently confined to the soft and social sciences. They are biologists, linguists, medical doctors.) Looking back, some of those explorations of the future seem odd and even ludicrous. Consider, for example, the film Just Imagine (USA, 1930), a science fiction musical in which “women and men initially appear to be equal, albeit equally oppressed by an overbearing, homogenizing society that replaces names with gender-neutral numbers” (p. 42-3). Yet appearance was about as far as the creators of the film were willing to go, as this futuristic equality was only surface-deep, as women were apparently deemed incapable of choosing their own marriage partner. “In this future, marriage partners are chosen in courts of law where formal applications, filed by male suitors, are considered” (p. 44) and decided upon, even when the woman objects to the suitor. Unsurprisingly, given this exploitative premise, the primary relationships in the film occur within the context of a love triangle, making it another example of the type of film where the female protagonist’s primary role is that of passive love interest. Lest this type of narrative role be dismissed as an artefact of past prejudice, Conrad points out later in the book that the reboot of the Star Trek franchise, despite presenting Uhura as a professional woman with equal opportunities and talents as the other characters, places her within the narrative so that “her primary role is in psychological support of Spock. She is his girlfriend” (p. 209).

Uhura, as a character, comes in for some attention in this book, but the primary roles explored are what we might expect from a study of this type: Ellen Ripley, Princess Leia, Maria from Metropolis, and, perhaps the character that gets the single most focus, Zira from Planet of the Apes. Three of these last four characters are particularly interesting in that they can be observed over a number of different films. Zira, for instance, is one of the strongest characters in the original (1968) film: “It is significant to this survey that the most literate and rational of the apes comes in the form of the movie’s most celebrated ape character: the female chimpanzee, Dr. Zira” (p. 103). Conrad comments that, in adapting the film from the novel, the screenwriters “elevate Zira from her proactive, but ultimately powerless, presence on the page to a central role as the film’s conscience” (104). This was not a role that was destined to last, however. Her role in the sequels is reduced until she’s ultimately killed off, “so that there is no place at all for her (or indeed any other prominent female ape)” (p. 116) in subsequent films. The introduction, in the 2001 remake of Planet of the Apes, of a female ape called Ari is deemed unsuccessful by Conrad and other critics through lack of sufficient narrative focus. The creators of the remake, he comments, are clearly “reluctant, however, to rest this expensive project on the shoulders of a female, non-human protagonist, and so Ari fails to meet her potential” (p. 188), which is a shame, but which accurately illustrates how iconic, original female roles can be watered down to meet the perceived later advantages of return to the expected norm.

Zira’s descent into what Conrad calls “feminist-parody and self-mockery” (p. 116) is sadly not an isolated event. Interestingly, as Conrad observes, there are within the oscillating cycle of women in science fiction films, regular occurrences of satire and parody, often in service of off-screen social currents. Not all of these are pleasant. The 1912 French film, A la Conquête du Pôle (The Conquest of the Pole), for instance, shows an expedition to the North Pole where the male scientists’ attempts are disrupted by suffragettes carrying signs saying “We want to go to the pole.” Their efforts to be included are presented by the film as silly and interfering, and although a mysterious female figure appears at the end of the film to rescue the stranded men, the leader of the suffragettes, who has been represented as an unattractive, comic figure, tries to hitch a ride on the men’s hot air balloon, is “shaken off the basket, falls a few hundred feet, lands on a spike atop a church spire, and explodes” (p. 29). This particular death, phallic and patriarchal as the symbolism of it is, is presented as humorous and just deserts—the impact of off-screen beliefs in women’s place in society made manifest.

There are so many shifting currents in this book, and I think that Conrad’s success in producing such an interesting study lies in his continual acknowledgement of this fact—of the ongoing conflicts and opportunities available to women in science fiction films, and of the potential for future feminist film-making within the genre. Mad Max: Fury Road (2015), for example, and The Arrival (2016), so he argues, are examples of potential benchmarks within the genre, presenting well-rounded characters and a “female-framed narrative” (p. 255) in enjoyable, thought-provoking science fiction films.

Like Loading...
© Copyright 2019 By: Octavia Cade
About Octavia Cade
Octavia Cade is a New Zealand writer. Her stories have appeared in Clarkesworld, Asimov’s, and Strange Horizons, amongst others. Her most recent novella, The Convergence of Fairy Tales, was published by The Book Smugglers.
No comments yet. Be the first!