Reviews
Size / / /
The Other World, It Whispers by Stephanie Victoire
By: Jen Walklate 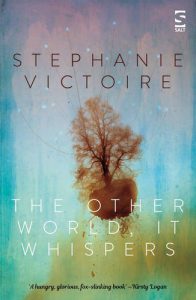 This is a whisper of a thing—a delicate light touch of a book. But, as the Muhammad Ali saying goes, float like a butterfly, sting like a bee, and this slim, gorgeously packaged volume, the first from Stephanie Victoire, has a quiet, vicious piquancy to it. There are nine dense and heavily intertextual stories in this collection, completed during the Almasi League Writers Programme, which works with Black, Asian, and Minority Ethnic writers based in Britain. Victoire (born in London of a Mauritian family) was in the first cohort.

Kirsty Logan has called this a collection of "new fairytales," and to some degree this is an accurate summation of what they are. But this description elides the complexity and reality that these stories have, and fails to describe the transcendent, almost epic nature of the themes—love, its loss, oppression, the search for self-determination, and the ambiguity and cost of desire. These are not, however, grandiose stories, not by any means—they are of and rooted in the everyday, despite their fantastical elements, but they are powerfully, universally human.

Many of the characters in these stories are women and many are queer. Identity is slippery and malleable. But all the protagonists are united in that they begin from a state of relative disempowerment, and by various means attempt to reach a position of control.

In the first story, "Time and Silence," for instance, we are taken into the life of an abused boy who discovers a strange fey-child in the woods, and, through her slow murder of his violent mother, manages to emancipate himself from his home life only to venture out into a place where wolves howl. But the boy is a reader of fairytales—he has met wolves in his mind before, and he is not afraid. Yet at the end of this story there is a lingering sense of unease; has a reliance on these stories saved or doomed him? This story sets up two of the most notable elements of this book—its ambiguity and its use of intertextuality. The latter appears not only in the author's references to myths, books, and plays on previous retellings in this genre, but also in her habit of nesting her own stories within her own stories.

"Layla and the Axe" is a typical example of the former type of intertextuality. For one thing, not only do we find a thinly veiled reflection on Red Riding Hood in the story itself, but also references to Frankenstein and Alice in Wonderland. One consequence of this is that it lends a depth and realism to the stories—they are located in a timeframe which has these things, and which relates to the world which we ourselves know, rather than existing in an out-of-joint atemporality or a mock-early modern period.

The second type of intertextuality is revealed in "The Bouquet Witch," which itself contains a half-told story in Mrs Edwin’s tale of Anastasia and her tragic end. This nesting of stories offers depth and reality—this is a "thick" story, which feels rooted in a real world. Queer, intense, platonic love is here too, in the relationship between Clementine—the narrator—and Anastasia, and it is a complex emotion: unromantic, intoxicating, and not immune from betrayal, violence, and sacrifice.

Victoire switches perspective and tense between stories with audacity and certitude, choosing the stance which will tell each story with the greatest acuity and raw emotion. "The Earth-Bound Express," for instance, which interrogates what changes and remains the same in identity over time, is told in a close third person—very much from the perspective of Dahlia, the protagonist, but in a voice of an external narrator. As a consequence of this the reader's relationship with Dahlia becomes very much like that you might have with a bar-stool acquaintance—you share intimate secrets, but at certain, jolting moments, realise you don't know them in the least. As with all relationships, the reader's connection with Dahlia is cocooned in solitude. There’s a deep sadness in this story—a recognition of the ultimate loneliness of living. In my review notes, I wrote one thing about this story—"*sustained weeping*"—and I think that about sums it up.

The behaviour, motivations, and states of the characters are ambiguous throughout. It is never quite clear if the oppressed find their freedom—or at least the freedom they expected—and when they gain their desires there is usually a cost to pay, or a punishment meted out. In "The Cemetery Pilgrimage," an unloved nobody attempts to make himself famous by taking into himself the powers of all the great luminaries buried in Parisian cemeteries, but ultimately it is the friendship he forges with his humble, ghostly guide, who only wanted to be a hero, which provides the heart of his story, and to which he wishes, despite all his gifts, to return.

The last two pieces, "Dark Arts and Deities" and "Morgana's Shadow," showcase all the themes of the previous stories, distilling their emotional punch into a sharp, concentrated liquor. "Morgana's Shadow" is structured very much like "Time and Silence," one of the more classically fairytale stories in the book in content and style. Thus it rounds out the collection well, by mirroring elements of the first story—the abused child, the desire for freedom—very closely indeed. But it ends on a less ambiguous, more hopeful note—the cry of an escaping hawk—and I can't help but wonder how this book would have changed had it closed with the much more violent trickery, deception, and disappointment of "Dark Arts and Deities."

Inevitably, as a collection of almost-fairytales, or at least a collection of short pieces connected with the supernatural, The Other World, It Whispers will be compared to most of the short story oeuvre of Angela Carter and Neil Gaiman’s Smoke and Mirrors. Certainly, it has the darkness and bite of works like The Bloody Chamber. But it does not have the verbal trickery (who but Carter could pull off a phrase such as "the amniotic salinity of the ocean" and make it both accurate and resonant?) or the dexterous use of stream of consciousness and tense slippage within a single story. But this may very well come with later books—there is time enough. Victoire shares a political aspect with Carter, but along with feminism there is an intersectionality here, one which offers stories focused on racial, gender, and emotional diversity.

It is also unfair to compare this to Gaiman's fairytales. The focus here is very much not on the positive power and importance of stories—in fact, stories bite and hurt for Victoire’s characters—but on people and their pain. The cast, too, are far more genuinely varied, polysemous, and enigmatic than any Gaiman has produced.

So there are obvious antecedents to The Other World, It Whispers, some of which Victoire surpasses, others of which she has yet to reach. But it is significant that she offers something new to the discourse: what differentiates her tales from other more run-of-the-mill retellings is her genuine exploration of what it means to be "Other." One is never sure if the "other" world is that supernatural one which the protagonists encounter, or their own state, estranged as they are from the people and life around them. In "Shanty," for instance, we find an eerie examination of dysphoria, what it might mean to attempt to be truly yourself when that self is so counter to how those around you perceive you or want you to be. And it is heartbreaking.

This is a gorgeous book. Perhaps a little lightweight, a little repetitive in tricks—cutting before the expected final scene happens in a few of the stories, just enough to get annoying—but ultimately, it is a subtle and mature work. It has an emotional heft which is weighty, but not gratuitous or manipulative. It deals with real-world issues—abuse, queerness, trans-ness, love, denial—in psychologically if not physically realistic ways. And, thank goodness, it is not a comforting read—there is no resolution. No claim that gods—or stories—will solve your problems. No heroes. No fulfilment of expectations.

In this book, other worlds do whisper. Many of them with sly, forked tongues.

Like Loading...
© Copyright 2017 By: Jen Walklate
About Jen Walklate
Jen Walklate teaches, writes, and researches in Museum Studies and Literature. She’s interested in the interconnections between physical and written media, the uncanny, world cultures, and folklore. She’s a massive and unrepentant Star Trek nerd. She loves collecting pulp science fiction books, and she can tell the age of them from the smell of the pages. She can be found at http://beyondxanadu.jennywalklate.net or http://fourmilecircus.jennywalklate.net/, or on Twitter @piratemoon.
No comments yet. Be the first!