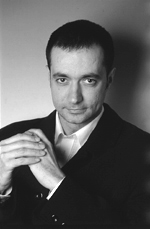 Cem Akas has to date published five novels, four short story collections and a volume of essays. His work is marked by a distinct style which has been noted for its structure and dialogue.

Cem Akas was born in Germany in 1968 but his family returned to Turkey in 1974 and went to live in Izmit. Akas studied chemical engineering at Bogazci University and then obtained a double M.A in Political Science from Bogazci and Columbia University. His Ph.D. thesis was entitled Collective Political action in Turkey from 1950-1980.

He has recently published a trilogy called Age of Maturity: the novels in that series called respectively Where the Fish Fell Captive, Quicklime, and Empire of Games. The trilogy is set in the future and is concerned with the abuse of technology by the elite who use it to introduce a new caste system based on who has access to technology.

Cem Akas: I guess that is a label, but then a pretty "cross-genres" one at that, don't you agree? That was said about my first collection of short stories, which appeared in 1990, and looking back now I realize I haven't traveled far. I'm still very much interested in connecting different disciplines of knowing and narrating -- my last novel, actually a trilogy, involves physics, political science, world history, Turkish history, theology, etc.

I want to see how areas conventionally regarded as lying outside the literary field can be brought into that field -- one of the projects I'm currently working on involves writing a physics book in the form of a literary narrative (or vice versa -- it becomes hard to tell after a while). I'm trying to connect the two in a more rigorous way than, say, Durrell used relativity theory in writing the Alexandria Quartet.

But back to labels -- "don't categorize me," goes a famous Blent Ortagil tune; I don't really have a problem with that.

It's the way the mind works.

PM: On your website it says you started writing during English composition exams, under duress. Is this how you feel about writing? That you do it under duress?

CA: That was a great thrill -- they would expect me to write an essay, and I would sit there for nearly an hour trying to figure out a short story on white cheese, and then furiously scribble it down in my horrible handwriting during the last thirty minutes. That was in my senior year in high school.

I'd give a lot to be able to write under duress again! The truth is, I hardly have time at all these days to write anything longer than a few pages. All my books got written during extended holidays, and I still haven't got the knack of writing as part of my daily routine. I've tried getting up at five in the morning, but it didn't work. I've tried writing after midnight, but it didn't work. It's a pity, too, because I feel great when I get immersed into writing something book-length.

PM: In your short story collection Secret Air Museum you challenge the post-modernist theory that the author is dead and has no control of the interpretation of his/her work. What role does the questioning of widely-held, yet unchallenged ideals play in your work?

CA: Hard to say. I don't really see myself as a "rule breaker" or a "troublemaker," but then I do try to come up with something interesting, not only content-wise, but structurally as well. There's little experimentation going on in Turkish literature, so even modest attempts like mine can sometimes get to be seen as big challenges.

PM: Franz Kafka once said, "We should only read books that want to make us die." In this era of disappearing literary novels how important is it to keep a tradition of exploring the dark banality of life? Is it something that concerns you and your work?

CA: Is that what he said? I thought he was talking about books that make us want to die. In any case, my feeling is that literature can legitimately do other things as well, like exploring the fact that one man's ceiling is another man's floor.

PM: Traditionally, Turkish writers have concentrated on writing realistic works, yet we are beginning to see more and more Turkish writers moving towards fantasy realism. (Is Orhan Pamuk the best example and the most obvious one?)

For a literature to be rich must it expand and divide into different genres and sub-genres?

Do you try to be active in different genres or do you wish to mingle as many as possible together and see what happens?

CA: It is not true that traditionally, Turkish writers write realistic works. At least since the 1950s the literary harvest has been variegated -- Yasar Kemal, Bilge Karasu, Oguz Atay, Ferit Edg, Hulki Aktun, Tomris Uyar, Yusuf Atlgan, Leyla Erbil, Feyyaz Kayacan, and Sevim Burak are but a few of the writers that have departed from realism. Orhan Pamuk, on the other hand, can hardly be called the best and most obvious example of "fantasy realism". Yasar Kemal is much better suited for that accolade.

Then again, it is true that some genres of writing have been conspicuously absent in Turkish literature, the favorite examples being science fiction, mystery, thrillers, and whodunits.

Labeling a writer's output in these days of intertwined genres is neither the easiest nor the most fruitful exercise. Writers all over the world are blending different things together to see what will come of it, and Turkish writers are no different.

PM: Your academic background is quite varied. You studied chemical engineering and then you switched to political science. Do you find yourself looking for new areas of knowledge to pursue? is it something you chase in your writings?.

CA: Yes. Although one does get old after a while and loses a bit of the original fervor.

PM: In which direction is Turkish literature going in the future? And is it the right way?

Should writers take more interest in popular culture to find material in?

CA: I frankly don't know where Turkish literature is headed, and don't feel up to expounding on "right ways." As for the popular novel, though, I find that there recently has been a veritable output on par with anything that gets written in other parts of the world -- not much better, but not worse, either.

Turkish writers have indeed discovered the fountain of popular culture, and I doubt "more interest" is required at this point. That may indeed be one of the more glorious outcomes of globalization. Good books, on the other hand, are infrequent, but still extant. All is not lost.

Philip Madden has published poems, stories, and articles of various genres in various publications. A native of England, he currently lives in Turkey where he teaches at Anadolu University.