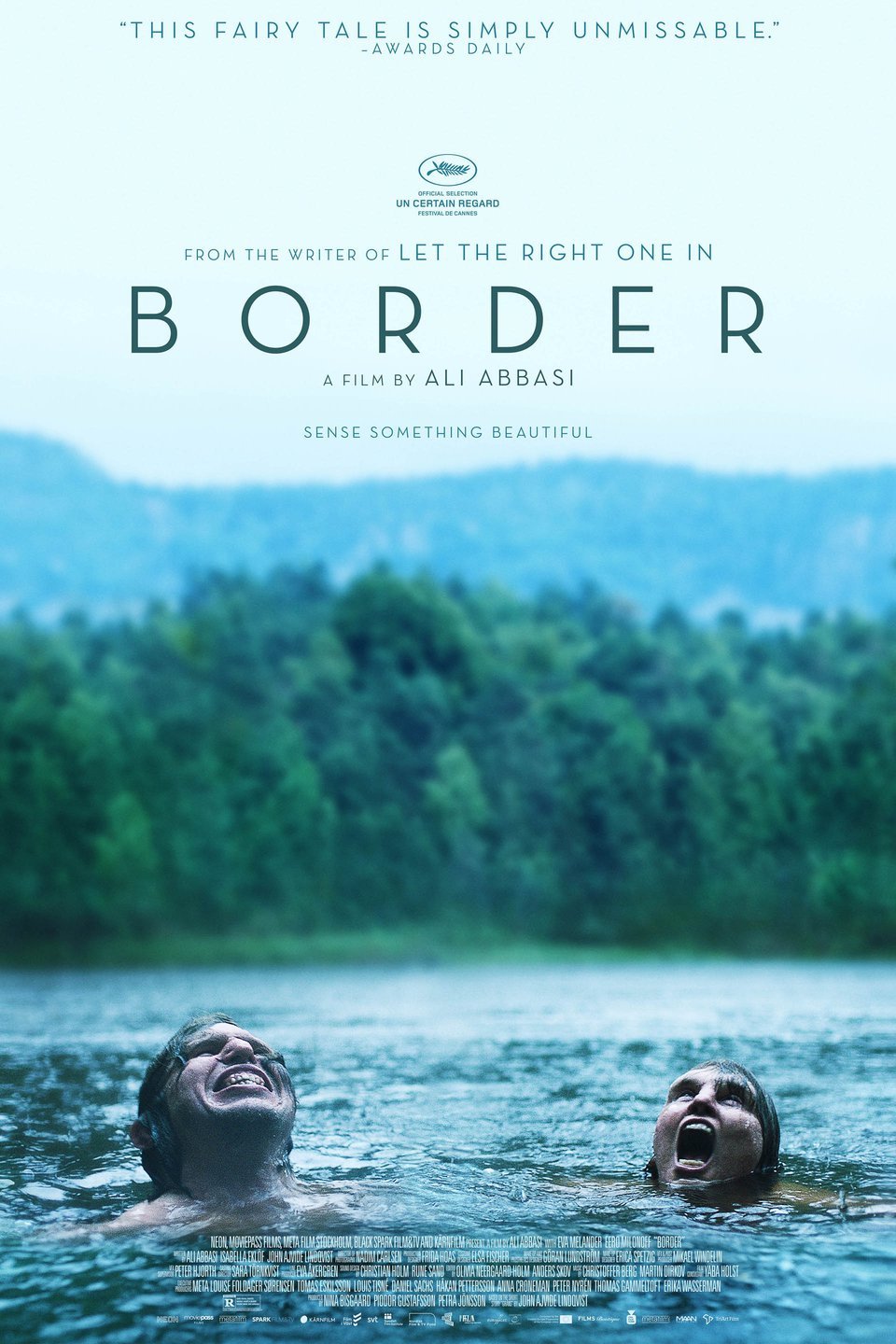 Do you ever look at a dirt-covered grub or a slimy, wriggling worm and think, mmm—tasty? Do you prefer the company of trees, foxes, and moose to that of your deadbeat balding partner? Do you have an excellent sense of smell? And maybe, just maybe, a scar on your lower back where a tail used to be?

If you answered yes to any one of these questions, you might be a troll—at least according to Swedish-Iranian director Ali Abbasi’s film Border [Gräns], an adaptation of Johan Ajvide Lindkvist’s novella of the same name. Lindkvist will be most familiar to non-Swedish audiences as the author of the vampire horror romance Let the Right One In, an indie film hit in 2008. The films, and the Lindkvist stories they’re based on, share certain thematic obsessions: both depict society as violent, particularly in its treatment of those who do not fit into its mould; both depict two outsiders discovering a shared affinity for something society regards as wrong; and both depict supernatural creatures in a matter-of-fact, sociorealist manner. There the similarities between the two films end, however, and viewers who enjoyed the lush colors and abrupt, gory violence of Let the Right One In may not find the earthier hues and more implicit violence of Border as appealing. But they’d be missing out.

Border is the story of Tina: rough-hewn, dull-haired, with an extraordinary sense of smell that makes her invaluable as a customs officer. Tina can smell not just the contraband travellers are smuggling across the border; she can smell the fear, shame, or excitement that accompanies each illicit smuggling attempt. She lives in a cabin in the woods with a deadbeat partner whom she keeps around mostly “to have someone in the house,” as she tells her father, the only other person with whom she appears to have something approximating a relationship. Tina’s real friends live in the forest: the trees, a solemn moose, a curious fox.

Enter Vore. He, too, is rough-hewn and dull-haired. His forehead juts just like hers; his eyes are bored deep into the bones of his face, just like hers. His smell confuses her—amazes her. So does the fact that Vore seems to takes delight in things she also enjoys, but has been told her entire life are disgusting, wrong, not done. He is the first to give a name to what she truly is, to what he is as well: troll.

At this point in the narrative, Tina’s story is in many ways emblematic of how trolls have been represented for centuries across Scandinavia: it is the story of someone who feels alienated, cast out from human society. This is not to suggest that the folklore has always been coherent on the subject of trolls; as John Lindow points out in his 2017 Trolls: An Unnatural History, “the word troll [has] denoted all sorts of things” through the centuries, “giants, troublesome people, even troublesome animals” (pp. 9-10). Only after Christianization does the figure of the troll solidify and cohere into the ugly, spiteful, often dangerous outcast familiar to us today.

One story about the origin of trolls in fact directly links their birth to Christianity. In this story, trolls were once Eve’s children. But she was ashamed of them, and so hid them from God. To punish her for her secrecy, God made them invisible. Hidden from their mother, they went unloved—and so became angry, envious of the human children whom their mother could still see, and still love. In this story, humans and trolls share not just a common origin, but a mother; they are siblings. The only difference between them lies in how that mother treated them. The story consequently crystallizes why trolls have remained such “powerful and enduring images of otherness,” to quote Lindow once more: because they were never that “other” to begin with (p. 9). Like humans, trolls have families. They eat and drink, get drunk, get lonely. They fall in love. They die. Unlike vampires, gods, or elves, they are as inescapably bound to their mortal flesh as humans are. But because that flesh does not conform to human norms or troll behavior to human rules, in the stories trolls are always denied human love—and so seek to destroy it. Indeed, their most frequently occurring crime in the folklore is an echo of the original crime once committed against them: the theft of a human baby, whom they replace with one of their own. The stories never conceive of the possibility that being “cast out” from human society might be precisely what the trolls want.

While Border echoes many aspects of troll folklore in telling Tina’s story, this one aspect Lindkvist has revised. For Tina’s feeling of disaffection from human society does not lie in being “cast out” in any traditional sense. On the contrary, she leads a conventional, middle-class, human-like existence. She has a house, car, job, partner, parent. She is even on friendly terms with her neighbors, a couple about to have their first baby. Her disaffection arises not from the fact that she does not possess these accoutrements, but from the fact that she does not enjoy them; she has simply been told all her life she is supposed to.

The scenes depicting Tina enjoying her newly recovered troll appetites is Border at its most interesting, its most potentially liberatory. For Lindkvist adds one more twist to his revisions of the troll mythos. Trolls, it turns out, not only do not conform to human conventions regarding appearance or dietary preference, they also do not conform to binary gender norms. Tina may have been told all her life she is female, but is she? Vore appears, at first, to be a near-caricature of masculinity: towering size; a low, growling voice; a menacing stance. But these signs of masculinity turn out to be just that: signs, surface deep only, and different depending on who interprets them. And so, as Tina and Vore frolic through the woods, bathe naked in the lakes, roar at the rain, eat whatever they want, and noisily have sex, Abbasi’s Border becomes a celebration: of the snarling, grunting, roaringly ecstatic joy of the body—all bodies, that is: queer, trans, human, fat, animal, troll, cisgendered, fox.

Here, too, the film adaptation of Lindkvist’s novella achieves something that the novella arguably does not. The novella is narrated in the third person, but told from Tina’s perspective; in the novella, we see the world wholly through Tina’s eyes. About midway through, Lindkvist makes this perspective even more immediate by inserting excerpts from Tina’s diary into the narrative. In the film, however, while Tina remains our main protagonist, the viewer is denied access to her emotions beyond what gestures, facial expressions, or dialogue might convey; there is no voice-over narration. Consequently, when Tina has sex with Vore, it is not as Tina that we experience that sex; instead, we experience it as viewers, observing from a distance as two non-binary, conventionally unattractive, human-like bodies sniff, grunt and eventually have blunt sex on a rock in the woods. The light is cold, the frame wide and still; the scene falls into none of the conventional categories of cinematic sex: it is neither sexy, funny, nor awkward. Instead it is simply unusual (there is a lot of rather intense sniffing). It therefore confronts us with a question: why exactly do we find it so? (Why don’t we sniff each other more often?)

Throughout the film, actors Eva Melander (Tina) and Eero Milonoff (Vore) convey an extraordinary range of emotions through the heavy silicone masks they wear, masks that reportedly took four hours to apply each day during filming. It is Tina who truly stands out, however: heartbreakingly vulnerable one moment—roaring with fury the next. Nadim Carlsen’s cinematography is equally deft: richly hued and evocative while keeping steady pace with Tina’s story. One scene, of Tina standing quietly in a pitch-black forest at night, petting a moose and watching her lit-up house from a distance, was a particular favorite: part Gregory Crewdson, part Twin Peaks. The screenplay, meanwhile, adapted from Lindkvist’s novella by Lindkvist himself, together with Abbasi and Isabella Eklöf, adheres to the basic outline and character of the novella while adding a Scandi-noir subplot involving abducted babies that is clearly meant to expand on and further dramatize the novella’s key themes. The pace of the film increases; the story becomes more action-packed, more accessibly melodramatic; suddenly we’re not so much in a meandering fairy tale by way of Ken Loach as in a Scandinavian version of the TV show Grimm. While this will no doubt appeal to some, the added subplot positions the second half of Tina’s story in rather predictable noir territory. Tina becomes more of a conventional hero, the world more a conventional villain, and some of the complexity of both Tina’s character and Lindkvist’s story gets lost in the process. To say precisely how would be to spoil the plot of the movie; suffice to say that the Tina of Lindkvist’s novella is an angrier, more vengeful character than the Tina of Abbasi’s film—Lindkvist’s Tina rescues no one but herself. She is, after all, a troll. She owes the humans nothing.

Toward the end of Lindkvist’s Border, Tina looks out at the “masses of fir tree forest at the edge of the road, and the mere sight of it brought her comfort” (p. 51, translation mine). A fence wraps around the edge of the forest, placed there to prevent wild animals from running onto the road. Looking at it Tina can almost hear the chorus of frightened human voices who built both the fence and the asphalt road that runs beside it. “Keep the forest away from us,” the voices murmur. “Tame it. Lock it up” (p. 1, translation mine).

Like Loading...
© Copyright 2019 By: Gabriella Ekman
About Gabriella Ekman
When she's not wandering in the woods, Gabriella Ekman teaches writing and English to university students in the beautiful city of Stockholm. She also reads poetry to dogs (because they like it). Her reviews, articles, and translations have appeared in Guernica, Victoriographies, American Book Review, and other venues.
2 comments on “Border [Gräns]”

Great review - gives a real sense of the film without giving too much away.