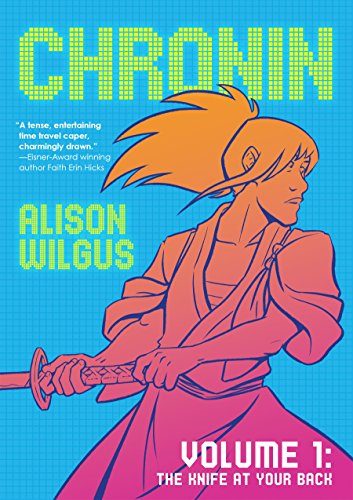 I'm not usually one for time travel for the same reason I can’t watch stand-up comics. There’s just so much that can go wrong! I end up watching comics through my fingers like other people watch horror movies, waiting for all the things that can get derailed. And time travel stories are worse because things absolutely always go wrong. Otherwise, there’s no story.

I realize, though, that this is a particularly inconvenient phobia since the market is replete with time travel. This year alone, there’s been The Future of Another Timeline by Annalee Newitz (2019), the second novel in the Alice Payne series by Kate Heartfield, and Amal El-Mohtar and Max Gladstone’s This Is How You Lose the Time War, as well as Empress of Forever, also by Max Gladstone. (Max, are you doing ok, temporally speaking?) And then there’s the conclusion to the Chronin duology, The Sword in Your Hand. Which, once I opened it, I was helpless to resist.

From the get-go, Alison Wilgus has an absolutely stellar combination of great story, great dialogue, and great characters. Her art style is elegant and uncluttered, expressive of both subtleties of feeling and the huge action of battle. There’s a lot of big, explosive drama and quiet, human drama to be had in both volumes—the first of which is The Knife at Your Back—all of which take place primarily in feudal Japan.

You don't need to have a detailed understanding of Japanese history to understand Chronin, although basic familiarity helps. The books are set toward the end of the Tokugawa Shogunate, just before the Meiji Restoration. Or, they would be, except that meddling from time-traveling researchers has changed the outcome of history. Now the conflict between the conservative pro-Shogunate forces bent on isolationism—the Shinsengumi—and the more liberal pro-Emperor forces who favor modernization—the Shishi—is not proceeding as historical research says it should. Mirai is one such researcher, but she had no intention of violating the strict rules governing her foray into another spacetime. Bad luck was all that got her trapped.

Other researchers had fewer compunctions, or at least better self-justifications for flouting the restrictions. And as a result, things went wrong. And that wrongness compounded, altering history, and Mirai finds herself trapped in 1864. Bad enough, but then her 1864 begins to unravel from the 1864 she spent so long studying. Too many changes have split the timelines, and Mirai will have to fix history if she ever wants to fix her own predicament and get home to 2045.

In order to fix things, Mirai needs help from some locals (temporally speaking) as well as a few unexpected allies from among her time-traveling colleagues. There’s Gilbert, an Englishman doing research on Japan who masquerades as … an Englishman doing research on Japan, albeit from 1864 instead of 2050 (Wilgus is good with tongue-in-cheek humor; among other things, Mirai’s name literally means “future”). And then there’s Kuji, a former fellow student who mysteriously abandoned the program—and Mirai, his now-defacto-ex girlfriend. Turns out he decided to stay in 1860s Japan and fight for a cause he already knows will be (a) important and (b) victorious, which everyone points out is just a way for him to live out his samurai heritage fantasies.

But at least Kuji is on the side of progress, nominally supporting the ideas of greater freedom for all castes and classes while he gets to carry his swords and swagger around. Azai, the man who emerges as the antagonist more fully in the second volume, is against any such progress. He is aware of the future that is made available to him by time travel, and wants to change it so that his beloved Japan can remain the same, untainted by Western influence.

So is patriotism backward-facing, primarily motivated by conserving traditions, or is it forward-facing, motivated by the people who practice those traditions? Wilgus makes no bones about it: it’s the people who matter, first, last, and always. And à la Steven Universe, sincerity, love, and queerness win out over fear and conservatism, even changing the heart of the primary antagonist, Azai.

But I don’t love that, in the pivotal scene, Gilbert (a white dude) declares that Mirai (an American citizen) “is the Japan of the future” (The Sword in Your Hand, p. 347). I think it’s meant to champion globalism and feminism, but it’s more than a little tone-deaf. Maybe Japan’s archaic elements need to put aside xenophobia and rigid class/gender/caste structures, but a white person shouldn’t get to be the hero there, given that the larger conflict springs in part from the threat of white imperialism.

Nonetheless, Gilbert convinces Azai, whose lover Hiroshi (both are men, for those unfamiliar with Japanese names) is an eta (or burakumin), a member of the lowest caste. Eta are forbidden to hide their status or rise above their station, meaning that if Hiroshi were ever discovered, Azai—as magistrate of Kyoto—would have to sanction his execution. The declaration that the future of Japan is freer and queerer than the Japan of 1864 is still a powerful argument.

It’s also a little odd that Wilgus holds up a shining future-Japan when gay rights are far from established there in our present day. It’s possible Wilgus is really only talking about the status of eta in the future, not the status of gay partnerships, since homosexuality itself has never been the issue it was in the West. (In fact, The Tale of Genji, the first novel ever written, features a main character whose bisexuality is a nonissue.) But gay marriage is still not legal in Japan, nor is sexuality a protected category under the law. Wilgus is definitely not saying that modern Japan is perfect, but all this did make me wish she had explored its flaws more fully.

Wilgus did, however, give her attention to some of the larger issues of time travel. Unlike classics of the sub-genre like “A Sound of Thunder,” Wilgus doesn’t subscribe to the Butterfly Effect theory. For her version of time travel, little decisions don’t add up. It doesn’t matter to history whether you make that train or the next one, whether you dye your hair or cut it, whether you gain or lose a few pounds. In a world in which offhand tweets from five years ago are regularly dredged up and wielded like bludgeons, there’s something lovely in the implication that the incidentals of life really are incidental.

But there’s also the suggestion that big decisions don’t matter, either.

In providing a better life for Hatsu and her mother by taking them into the future, Mirai also proves that their lives weren’t sufficiently consequential to the past. Now, maybe that’s because the circumstances of their birth and station prevented them from having more impact, but the end result is a little dismal: whether they lived in 1864 or 2045 made no difference to the timeline.

Fortunately, Wilgus is not advancing the “great man” theory of history either. Several key leaders of the Shishi die and are successfully replaced without meaningful damage to the timeline, too. It’s the ideas rather than the proponents of those ideas that really matter, and there’s a very hopeful note to be found in that. It means that people can change their minds and that those changes are the ones that matter.

Within this conceptual frame, there are all kinds of allegiances and stakes and drama, and the narrative is so well-paced that I poured through these books in record time. On the level of pure story, Chronin is great. Full stop. I don’t want to hinder anyone from buying or reading either volume.

But on that philosophical level … well, it’s more complicated.

This is very much a story about Japan and America. Is that wrong? No. Is there a lot more that can be said? Yes, absolutely. I’m not sure it was incumbent on Wilgus to be the one saying it—genuinely, I’m not sure. She defined the scope of her project, she set the limits, and she did good work within them. But it’s hard to read this book about potential alterations to the past and not think about, say, the annexation of Korea in 1910, or the sex slaves we still so euphemistically call “comfort women,” among many other issues. Mirai claims that, “There’s some terrible shit that happens between now and when I was born. But we’ll learn from those mistakes” (The Sword in Your Hand, p. 340). Ongoing disputes about recognizing and rectifying those mistakes make clear that this is not necessarily the case. And on the other hand, it’s hard, too, not to think of atomic blasts obliterating millions of Japanese civilian lives. Treating them as “lessons learned” is a bit too pat and a lot too cruel. Time doesn’t pick sides—but history does. It’s our construction, and Wilgus is participating in writing it even in her SFF story about it.

The Knife at Your Back is mostly about Mirai trying to return her timeline. It has an intimate focus, and the questions it asks are more about individuals. But the second volume, The Sword in Your Hand, is about trying to return all of history to the original timeline. To do so, the main characters must fight a conservative element in Japanese politics that is isolationist, xenophobic, and devoted to the caste system. Against that conservatism, they hold up the modern era. And yes, the caste system is decimated, and yes, women have far more rights—but there are plenty of examples, too, of how things are far from perfect.

I’m not trying to single out Japan when clearly America is staggering under the weight of its sins. I’m only trying to elucidate a feeling that began creeping up on me while reading the second book, a feeling that was like a smile over quiet despair.

Mirai and her companions are mostly fighting to get back to the original timeline because they just want to go home, and because they largely believe that no one should change the past. But alongside that simple goal,there’s a subtle implication that history has a certain inevitability, that we have it better than our ancestors and so we shouldn’t change the past. I like the optimism there, but these books come to us at a very pessimistic time in history. And so I have to ask: is this really the future we’re happy to have? This? Must we be grateful? Things could be worse, yes: the Meiji restoration could have failed, Japan could have been colonized, the caste system could still be in place, etc. It could always be worse. But are we so sure it couldn’t be better?

Wilgus seems to be making the point that things get better, that history’s long arc really does bend toward greater justice and greater freedom. Again, I like her optimism. I see her point and I believe it. But to borrow another quote, “the past is never dead. It’s not even past” (Faulkner, Requiem for a Nun [1951]). Wilgus is dealing with events that led not just to equality and happiness, but also to death, tragedy, and immense suffering. That past isn’t past—it lingers even now.