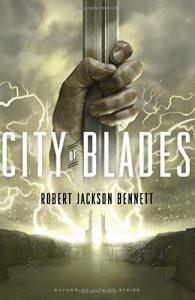 Before 2014, Robert Jackson Bennett had carved out a niche as a quintessentially American fantasist, one whose novels were all, in some way or another, about the meaning of America itself. His early novels were built around various old images and tropes of American history that have since entered popular folklore: the Okies and wanderers of the Depression (Mr. Shivers, 2010), the glittering towers and engines of the Gilded Age (The Company Man, 2010), the lost world of vaudeville (The Troupe, 2011), and the all-encompassing domesticity of the postwar Levittown (American Elsewhere, 2013). Each of these novels portrayed their respective dreamlands as corrupted realms, false utopias assembled by inhuman or malevolent beings for their own purposes. Overall, Bennett's work could be compared to that of Stephen King, though Bennett’s interests seemed to lie more in the fantastical than the merely horrific.

However, Bennett’s 2014 novel City of Stairs marked a shift into pure secondary-world fantasy. The premise of City of Stairs reads like a sequel to a standard fantasy trilogy. Once upon a time, in a Slavic-accented place known as the Continent, six gods emerged, banding their worshippers together into a great army that conquered most of the world. However, in the downtrodden land of Saypur, a figure known as the Kaj appeared, wielding a weapon that could kill gods. When it was all over, the Continent’s gods had vanished, and their passing undid the miracles they had wrought on the land, converting the Continent from a glittering paradise into a frozen nation of slums. Over the course of several generations, Saypur became both the preeminent industrial power in the world and the master of the Continent, ruling over the new states that emerged in an uneasy pseudo-colonial fashion. The novel proper opens with Ashara Komayd, Saypuri intelligence agent, investigating the murder of a famed Saypuri historian in Bulikov, the former capital of the Continent. In the course of events, her inquiry spirals into a series of investigations into the Saypuri foreign ministry, a cabal of anti-Saypuri Continentals called the “Restorationists,” and into some disturbing rumors that not all of the gods died during the Kaj’s purge.

As a novel, City of Stairs has much to recommend it. The book has a compelling female lead, and there is a quite sophisticated discussion on the vagarities of truth, memory, and history. The only flaw of the novel was that its sophistication often came to grief on the base structure of the story itself. City of Stairs is written as a combination of a spy thriller and a fantasy adventure, two genres with very different requirements and attitudes. A reader expecting something closer to Graham Greene may be shocked to be halfway through the book and suddenly find themselves in the middle of a kraken fight. Additionally, while the best spy fiction will give the enemy his due, the Restorationists of City of Stairs are treated as simple people with simple minds who exist only to hate, mere opponents to be swept aside by the protagonists.

In the years since its publication, City of Stairs has expanded into the Divine Cities trilogy, with the projected final volume, City of Miracles, due sometime in 2017. While the books have been structured to be read independently of one another, it is in the nature of these things that the earlier volumes are needed to contextualize the later ones. This is particularly true of the trilogy's central volume, 2015's City of Blades, which both reflects and refracts its predecessor.

While City of Stairs ended on an optimistic note, City of Blades begins five years later under a chill. The ambitions of Saypur’s new reformist prime minister, intended to change Saypur’s exploitative relationship with the Continent into a partnership between equals, have floundered. Meanwhile, General Turyin Mulaghesh, a secondary character from the first book promoted to the rank of protagonist, has likewise resigned both her commission and herself to whiling away her golden years alone on a tropical island in the company of a bottle. Some dodgy business with her pension brings her back in contact with Ashara Komayd, who has one more mission for her: journey to the Continental city of Voortyashtan and investigate both the disappearance of a Saypuri intelligence agent and the discovery of a new ore with strange electrical properties. A particularly unenviable assignment, considering that Voortyashtan was the home city of Voortya, the former Continental goddess of war and destruction, and the various local tribes do their best to follow in the traditions of their departed Divinity.

A missing intelligence agent. A city chafing under colonial rule, nursing a thousand grievances. Mysterious figures wielding artifacts powered by divinities long thought dead. In many ways, City of Blades follows the model laid down by City of Stairs to a tee. However, to call it a retread would be quite incorrect, as City of Blades reworks the fundamentals of its predecessor in ways that serve to make it a much stronger work.

Consider City of Blades' depiction of colonialism. The first book depicted a simple, static model of colonialism, with the Continentals cadging favors from the Saypuris who in turn hovered omnipotently over the landscape. In City of Blades, this model has begun to splinter. The greatest Saypuri presence in Voortyashtan is Fort Thinadeshi, an immense concrete fortress dating from the first Saypuri landings on the Continent. With its great artillery works, the fort is a node of power projection, but her soldiers rarely stray far beyond her walls—save for the occasional reprisal raid on the highland tribes. In Bennett’s description of the fort, it is hard not to imagine those great American forward operating bases in the Arabian desert, filled with the comforts of home and guarded from suicide bombers by concrete walls and machine-gun checkpoints. In its strength, the fort implies weakness, and that weakness has invited others to scavenge.

In Voortyashtan itself, the Southern Dreyling Company, a creation of the new United Dreyling States, is engaged in a massive project to dredge the ruins of old Voortyashtan out of the harbor and turn the city into a true warm-water port. (Old Voortyashtan was built by the goddess over the water. When she died, so too did the city slide beneath the waves, leaving the survivors to make for the mountains.) Overseen by Signe Harkvaldsson, daughter of Stairs’ Sigurd, the goal of the project is nothing less than the creation of a Dreyling stake in the future of the Continent, both in the harbor and in the future exploitation of the interior. As the modern age drags on, direct imperial control gives way to corporate colonialism. Unfortunately, yet rather appropriately for a novel of exploiters, while the colonial powers are richly characterized, the Continentals themselves remain rather opaque. The Voortyashtanis are divided into tribes of wealthy lowland farmers and wild highlanders, but not much is characterized of them beyond that. At times, it’s difficult to determine if Voortyashtan itself, with its buildings and yurts side by side, is an actual city or a permanent refugee camp.

Of course, a novel lives or dies by its characters, and it is here that Bennett shines with Mulaghesh. With her acerbic bluntness and her imposing physicality, Mulaghesh is one of the bright spots of Stairs, at times recalling Lin Beifong from The Legend of Korra. Though battered and shorn an arm in the previous book, she remains her bitter, lively self in Blades. Indeed, in some ways she is more enjoyable as a protagonist than Ashara was in Stairs. By virtue of being a soldier, spycraft is unfamiliar territory for Mulaghesh, and her fumblings in the espionage game make more sense for her than for a hypercompetent spy like Ashara.

Also unlike Ashara, Mulaghesh has a fair amount of backstory to her, which serves to set up the central conflicts of the novel. In the previous book, mention was made of her participation in the Summer of Black Rivers, the last major Continental uprising against the Saypuris. In City of Blades, the nature of that conflict is expanded, particularly Mulaghesh’s participation in the “Yellow March,” a campaign against civilians reminiscent of Sherman’s March to the Sea during the American Civil War. It is a time that haunts Mulaghesh still, particularly since her former commanding officer, Lalith Biswal, has become the general in charge of Fort Thinadeshi. Through Mulaghesh, the novel becomes a meditation on the nature of war and of soldiering itself. Is a soldier to be a raider and warrior who destroys, and the Voortyashtanis preached? Is a soldier one who acts with cold utilitarianism and seeks glory, as Biswal avers? Or is being a soldier a position of service, of taking a burden upon oneself so that others may live free, of building and protecting as well as destroying, and of always accepting the costs of conflict, as Mulaghesh argues to herself?

It is a complex issue, one that has troubled soldiers, statesmen, and philosophers for all of civilized history, but here, as in Stairs, the high-minded nature of the arguments are poorly served by the narrative. Both books have a tendency to split characters according to a simple good/evil dichotomy, with the evil characters properly showing themselves beyond redemption in the final act. While the books take a great deal from Terry Pratchett's Discworld series, an ambivalent Machiavellian figure like Lord Vetinari would find no home there. In the world of The Divine Cities, the good did their evils safely in the past and properly repent for it, while the evil are motivated by base selfishness that renders their worldviews irrelevant and their deaths well-deserved. Such a worldview seems more at home in the realm of adventure fantasy than in the world of espionage thrillers to which this series harkens. It also seems ill-suited for depicting the issues at hand, forcing a pat answer upon questions whose answers change every generation.

And yet, taken simply as an entertainment, City of Blades is quite an enjoyable book. The characters sparkle, particularly Mulaghesh, Signe, and the returning Sigurd. The few fantasy battles are visually impressive and feel more at home in Blades than they did in Stairs. And yet the novel ends under an even greater pall than the first one, with multiple deaths and manipulations abounding. At times it seems as if both Stairs and Blades are pointing to a great reckoning, some great terrible revision of relations between Saypur and the Continent awaiting in the none-too-distant future.

Perhaps Bennett never stopped writing about America when he began City of Stairs. Both it and Blades bear the imprint of the wars of the 2000s, and both are concerned, on some level, with attempts to secure a peaceful, liberal, democratic world order. It’s a question more relevant than ever these days, and while these books might not show the way forward, they may show just why the project eventually came to grief.

[…] a long absence, I’ve made a return to reviewing for Strange Horizons with my latest piece, a discussion of City of Blades, the second book in what has become Robert Jackson Bennett’s […]