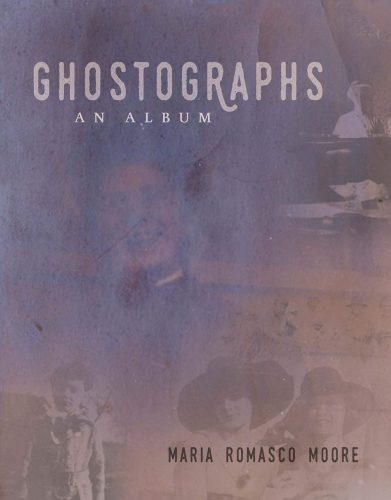 The French philosopher Roland Barthes famously claimed that he hated having his picture taken, as with each click of the camera he felt himself transformed from a subject into an object, a living person into a static thing. He was convinced it was kin to dying. Romasco Moore would appear to agree with him. In titling her debut collection Ghostographs, Maria Romasco Moore seems similarly to insist that taking another person’s picture is to create a ghost: an image that haunts you the instant it is made, since the singular moment it depicts—the gesture she made, the way he smiled—will never return.

The nameless and ungendered narrator of Ghostographs has their own ideas about this sort of thing, however, insisting on the second page of the collection that, ”Every story is a ghost story […] Even the ones you tell about yourself” (pp. 2-4, italics mine). The narrator expands on this idea on the next page:

With this introduction, we enter Ghostographs proper, a landscape comprised of sometimes linked, sometimes stand-alone tales about people—ghosts, fragments, a “hundred some versions” of—living in an unnamed town surrounded by thorns and tall grass. They emerge gradually, these townsfolk, always accompanied by black-and-white photographs. The latter are often so degraded with age and exposure they are not just faded but yellowed, even purplish, the people depicted therein visible only as contours; others glow an intense, washed-out white amid blurred shadow. Dress and hairstyle mark these people as denizens of the late nineteenth or early twentieth century, but time period feels immaterial here; in this town, “time itself is a kind of light” (p. 71). The point rather seems to be that everyone in this black-and-white world, from the woman who breastfeeds her pig to “the terrier haunted by the ghost of a Great Dane,” are past, not present; that they are ghosts (p. 38).

Playful, clever ghosts at that, for the best of these stories evince a sly humor coupled to an unexpected twist, or take a figurative statement, render it literal, and follow that literality to its logical conclusion, as in the story of Tess:

They always said, Let the light of the Lord shine through you, but when she [Tess] did just that they couldn’t take it. You should have seen the fuss they made. Exorcisms on the hour every hour.

We all hated how smug she got in a darkened room.

Her mother put her out on the porch at night. She shone brighter than the streetlamps. Moths migrated from miles around just to throw themselves at her … (p. 19)

Other stories explore the kind of flash of frightening truth that can crack open the everyday, such as the act of bringing muffins to “the woman across the way,” only to discover snakes live beneath her skin:

At the county fair that year, she had a quilt up for raffle. It was made of scraps no bigger than postage stamps. Everyone marveled at how a woman so old could make stitches so fine and straight and small. But I knew how. She had the snakes sew it with their teeth. (p. 11)

This sharp little sting of a story works on multiple levels: it makes us see something familiar (hands, veins) as suddenly frightening and dangerous (snakes beneath the skin). Even more so: it makes us, quite simply, see—see, for instance, the similarity between a snake, with its sinuous body and sharp teeth, to a threaded needle. It twists our perception of domesticity, of ordinariness—for we are in the midst of the ultra-domestic here, a land of muffins, neighbors and quilt raffles, and yet into this seeming idyll snakes have not just slithered in; they always lived here. Beneath the skin. And they sew.

Unfortunately, for at least this reader, Ghostographs too often does not deign to scare us, jab at us, or really make us feel anything at all beyond admiration at Romasco Moore’s wit and imagination, her ability to toss figuration and cliché into the air and transform them into surreal scenes or unexpected twists as they land. Performing such conjuring acts is no mean feat, to be sure. Nonetheless, I kept wanting Ghostographs to be—well, more. More grounded in emotional, if not actual, reality. There are hints of the genuinely eerie here, as when the mother offers this standard cliché to describe the narrator’s dying Aunt Millie—“she’s fading away before our very eyes”—and the narrator observes that no, in death Millie is not fading at all:

When I looked at my great aunt I did not see something diminishing, but something emerging from where it had long been buried. The nurses quit soon after, and the family had Millie sent away to a state-run place. I think they all saw it too, and were afraid. (p. 52)

There are evocations of a feral childhood (“we moved in packs”), shading into the losses of maturity. All too often, however, as soon as emotional truths are glimpsed, the narrator darts away from them. A story about a mail-order baby feels forced; another about a man engaged in a staring contest with a lamp is just that—a punch line, momentarily funny but nothing more.

“The Bridge over the Abyss,” however, is an exception, and one of my favorite pieces in the collection. It begins by matter-of-factly informing us that the town of Ghostographs has an abyss and is proud of it, “proud that a town as small as ours had an abyss of its own” (p. 12).

True, every now and then someone would jump off the bridge and then someone else would say, We’ve got to do something about the damn thing. Think of the children. And then everyone would think about us for a few days. We would think about ourselves too, and about what it must feel like to fall forever. It didn’t seem so bad to us. Like my mother always said, there are worse ways to spend your time.

The people who went over the railings were missed, to be sure, but they were never truly mourned. There was too much uncertainty. It seemed possible that if we just waited long enough, we would hear them, calling up to us from a long way down, calling up to tell us what they’d found. (p. 12)

This is a lovely piece: it has the sly humor and play on language pervasive throughout Ghostographs, with the adults’ perfunctory claim, “Think of the children,” turned into near anaphora, repeated and turned on its head: “And then everyone would think about us for a few days. We would think about ourselves too.” There’s the wry twist on the mother’s pragmatic homily (“there are worse ways to spend your time”), used to reflect on what it might be like to ”fall forever” into an unending darkness. Yet the story also takes us deeper; into that desperate fantasy we engage in when we have lost someone: that perhaps they just went for a walk. Had a bit of an adventure. They will return, if we just “wai[t]…long enough.” If we just wait and listen, eventually we will hear them, “calling up … from a long way down, calling up to tell us what [they’ve] found.” The narrator claims this is not mourning, but to me it seems precisely that: mourning in the form of absurd hope—absurd, that is, except in the gleaming otherworld of Ghostographs.

This makes me wonder: what if Ghostographs had taken us into that abyss? What rough beast might Romasco Moore have found there? In this collection, at least, we never quite make it there. We stay above ground, awash in too much light. But maybe next time. As the narrator observes, we are always changing, and the world always changing with us: ”like the flicker of a shutter, light remakes us every instant” (p. 72). On that note, the very act of writing a review of Ghostographs, of trying to capture and fix the elusive quality of these slyly humorous flash fiction pieces, feels a bit wrong-headed. Like trying to take a picture of the Cheshire cat, the moment the shutter flashes, he will have disappeared, leaving behind only the twinkle of a grin to mark his passing.

Like Loading...
© Copyright 2019 By: Gabriella Ekman
About Gabriella Ekman
When she's not wandering in the woods, Gabriella Ekman teaches writing and English to university students in the beautiful city of Stockholm. She also reads poetry to dogs (because they like it). Her reviews, articles, and translations have appeared in Guernica, Victoriographies, American Book Review, and other venues.
No comments yet. Be the first!