Reviews
Size / / /
The Monster of Elendhaven by Jennifer Giesbrecht
By: Mark Granger 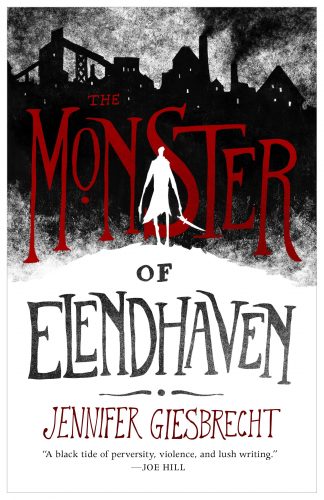 A murky slime permeates The Monster of Elendhaven, the unrelentingly bleak debut novella from Jennifer Giesbrecht. It is a story of love, revenge, and identity—and one that revels in its own perversity.

The titular monster is Johann, a boy who for many years didn't have a name, and was only given one when a random sailor took an interest—and then promptly stole from him as if charging him for the privilege. Johann is, though, special: he can't die and is almost impossible to remember, existing in people's minds for just about as long as he needs to. He uses this combination of odd traits to steal, kill, and generally do whatever the hell he wants.

That is until he meets Florian Leickenbloom.

Florian is described as Johann's “perfect opposite”—“a blazing beacon of straw-yellow hair and glass pale eyes,” compared with Johann’s “thin, pallid skin stretched taut over a skeleton that threatened to slice through his flesh at every knobby juncture.” To Johann, Florian seems to be the perfect mark, someone from whom he can take what he wants, and then treat disposably. This is until he realises Florian isn't quite what he seems: doors open without him touching them and he enjoys coffee and a biscuit for free without the cafe staff noticing. Small miracles, maybe, but it is clear to Johann that Florian is a sorcerer … and he wants to be part of his world.

So Florian takes Johann in—on the understanding that he will teach Johann what he is if Johann, in turn, protects him and acts as a servant in public. It soon becomes apparent that there is much more to their relationship than this—there is a twisted love between them and possibly much more. And Florian has ulterior motives: the sorcerer’s family has lived in Elendhaven for generations, but he is its last surviving member—the rest wiped out by the plague. He blames the town and "the landed gentry, the emissaries from Mittengelt, the southerners who stole our futures" for their demise, and wishes to exact revenge. Johann happens to be the perfect tool for such a job: a forgettable killing machine. I mean, what couldn't someone like that be used for? With a few deft swipes of a blade, you could change the world. And that is what Florian intends to do. But there are mage hunters coming, and they could be anyone.

The Monster of Elendhaven slithers along at a steady pace and packs more story into its 159 pages than you'd expect, making you at once sympathise with and despise its characters. Nobody comes out of the story atop the moral high ground. There are murderers everywhere, and they all have their justifications. But, behind it all, we have two deeply sad characters who just want to be loved. There is tragedy in Florian's past that fuels his need for revenge, yet it is made clear that he was twisted before that and the death of his family merely pushed it to the fore. Giesbrecht never makes excuses for her characters, she presents them as they are: Bleak. Nasty. Human. Even when they aren't quite.

Other characters in The Monster of Elendhaven, seen through the lens of our two protagonists, float around dreamlike, almost as if they mean nothing to the bigger scheme of things—and, it turns out, they do indeed mean very little. This is a story that relies on past events more than current, and as such all “current” events swim beneath a murky film, like it is being seen underwater. And maybe they are.

Adding to this dingy atmosphere, parts of the story rely on rather petty politics. But they are ultimately just a backdrop for a deep, melancholic vein of horror that occasionally opens up and soaks the pages in gore:

It was not a clean cut. The hatchet stuck in the tibia, and Flora was not strong enough to tear it free. Blood burst up from the saphenous vein in tall ribbons that throbbed in time with their mother's heartbeat. Fast like a caged butterfly, then slower, and slower. The first spurt caught Flora in the eye, and she fell back on her bottom.

Their mother screamed at a terrible, ragged frequency. It was an animal noise, the kind a human can only make when they see the other side of the abyss. (p. 98)

As this slice of its prose might show, The Monster of Elendhaven is a solid debut. It is also one that stays with you for many reasons—an intriguing concept, the central relationship between the monster and the gentleman. But it's a truly horrifying series of flashbacks that will play on your mind for months to come. Everything about this book is wrong; and that's what makes it so right.

Like Loading...
© Copyright 2020 By: Mark Granger
About Mark Granger
Mark Granger is trying to be a writer. His work has been used on BBC Radio 4 Extra and his short stories have been shortlisted in several competitions. His work can be found at mark-granger.tumblr.com. Although he barely updates it nowadays. One day he’ll get a proper website and stop referring to himself in the third person.
No comments yet. Be the first!