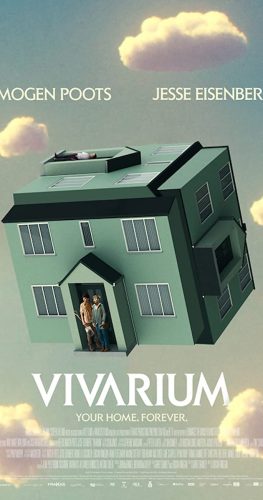 Vivarium is a film in the manner of those escapades into endless suburban horror, such as certain of J.G. Ballard’s short stories and the more metropolitan of M.C. Escher’s sketches. It is a film concerned with the infinite emptiness one finds sometimes in dreams.

We follow a couple, Gemma (Imogen Poots) and Tom (Jesse Eisenberg), on their visit to a labyrinthine housing development called Yonder. An estate agent—played by Jonathan Aris with demonic alacrity—shows the couple around a house: Number 9, he delightedly announces. There is a cozy backyard. A baby room painted blue for a boy. A spacious kitchen. Gemma and Tom are polite but unconvinced. The estate agent offers them champagne and endless promises. He tells them that this isn’t a starter home. He tells them that this home is forever.

Gemma is an elementary school teacher. Tom takes care of trees. They are looking to find a place where they can live a life together with their own children and their own trees and their own dreams. Yonder is not that place, though, and they recognize fairly quickly the need to escape from the creepy estate agent and the dubious promise of Yonder. But, in their attempts to drive away, they find themselves going in circles, trying again and again, new route after new route—what if we go straight? what if we turn here instead of there?—always ending up back at Number 9. “Do you want me to drive?” Tom says. “What good would that do?” Gemma says.

Here, we get a glimpse of all that is to come. The happy couple secure in their ability to navigate the world, a dawning realization of wrongness, and then an overwhelming sense of futility as one turn after another proves fruitless. Their growing helplessness transforms into a rage that transforms into an uncrossable distance. Eisenberg, in an unusually laconic role, plays Tom as a man buckled tight and wriggling, simultaneously desperate and unable to act. Poots, there beside him, plays Gemma as a teacher all too familiar with failures in maturity yet who still finds herself hurt by them. Her eyes display a remarkable range, flickering between empathy and disappointment—with Tom and herself and the world in which they find themselves.

This is the second feature film by Lorcan Finnegan. His first, Without Name (2016), concerned a land surveyor stumbling into horror while taking the measure of an ancient forest. Earlier, he directed a short film called Foxes (2011), in which a young couple gets tempted into trouble by the cries of foxes circling their home. In Vivarium, Finnegan continues his amalgamation of horrors wild and domestic. The film opens with a murderous montage of cuckoos—several varieties of which practice a very particular method of parentage in which they plant their eggs in the nests of other birds. What happens to the eggs, or babies, already present in those nests of those other birds? Simple. The cuckoos evict them.

Gemma and Tom spend their first weeks in Yonder bonding together in one escape attempt after another. There is an intimacy, however barbed, to be found in shared distress. They walk for days. They marvel sadly at the sunset skies draped over the endless houses. They try burning the whole thing down only to see their prison rise again from the ashes. Yonder exists, for the most part, in a palette of colors reminiscent of Super Mario World. The endless houses of Yonder painted drain-pipe green, the daytime sky a shade of blue best described as irrepressible. In one scene, Gemma and Tom marvel at how much the clouds look like clouds. “No real cloud always looks so much like a cloud,” one says. “Real clouds always look like something else.” The world of Yonder is a gorgeously rendered one, and it echoes in its designed-ness something of the over-designed aesthetic that marks much of our world—#AirSpace, #vanlife, #etc.

There is something so appealing about dreams. Few of us, though, want to spend our lives trapped inside the dreams of someone else.

Gemma and Tom survive in Yonder through the occasional delivery of care packages. Presumably dropped off by their captors, these boxes are full of food and necessities: frozen shrimp, eggs, toilet paper. This is nice. The two of them would rather not starve. But, still. Gemma and Tom are not pleased with this new brand of affectless reality. The camera tightens on the actor’s mouths. Saying the same things. Eating the same food. Frowning the same pointless frown. It is around this moment that the unhappy couple receives in one of their daily cardboard boxes something that looks remarkably like a baby boy.

Gemma picks it up. She looks at Tom.

Tom looks at the cardboard box.

On the box, there is stamped a message: “Raise this child and be released.”

Here we might be reminded of the cuckoos, but it is important to note the wisdom of the film’s slight variance from the typical behavior of brood parasites. No monster has stolen into the home of Gemma and Tom and murdered and replaced their children. Rather, through a series of subtle and not so subtle nudges, the monsters have snuck into their dreams and murdered and replaced their future with a shoddy simulacrum of all for which they had once hoped.

There is something in the otherworldly world of Yonder that will feel, for many, strikingly familiar to our own, more or less, locked-down world. The empty streets. The endless hours at home. The desperate pleasure of care packages delivered to your door (even if those packages do arrive, perhaps, as in the case of Gemma and Tom, via the evil overlords that keep you trapped). We would be doing the film a disservice, though, to view it only through the lens of our currently less than halcyon days. The powerlessness that rips through the bond between Gemma and Tom is a powerlessness common to all manner of life. Our lives are formed of scattered apocalypses. Hurricanes. Tornadoes. Sub-prime mortgages. The distant gazes that come to dominate the way Gemma and Tom look at each other will be familiar to any child who has been raised by parents who have lost all faith in their dreams.

Faced with the impossibility of this world and this child, Gemma and Tom, for a time, forget how to work together. They withdraw into their own worlds. Tom digs a hole in the front yard. It is the first and so far only lasting mark he has made in this world and so he refuses to do anything else all day every day but dig himself deeper and deeper. There must be a way out, he reasons. Gemma finds herself—perhaps all too normatively—trying to dig herself deeper into a relationship with the mysterious child. We see that she hates it. We also see that she has, like Tom, no choice. They are both attempting, as best they know how, to plumb the depths of their world.

Unlike some sorts of suburban horror, such as The Stepford Wives (1972 et al), the focus in Vivarium is not really on the creeping unease of this new and strange neighborhood. Sure. Things are weird. The roads are a kind of Möbius strip. The baby given to Gemma and Tom grows at an alarming rate and seems in its little-child throat to possess an extra muscle or two. But. Really. There is no suspense in the horror of Yonder. It is obvious that something is wrong from the start. We know it. Gemma and Tom know it. If we are meant to suffer with the wonder of their escape, then, there might come a point when the viewer may feel so trapped alongside Gemma and Tom that their heart might protest. This is natural. Something in the human spirit resists endlessness and inevitability, as much as it craves it, in drama as well as in life. And Vivarium does, in its repeated scenes of futility, threaten at times too much perhaps to mirror the endless monotony of the suburban horror it purports to depict. But, then again, I don’t think the possibility of escape concerns Vivarium. Nor should it concern us.

The monsters here are not hostile. Not the estate agent nor the demon child. They seem to take very little, if any, pleasure. They do not cheer life. They do not cry over death. They are born in boxes. They live in boxes. They die in boxes. It is quite an administrative way of life. One box checked after another. When we first meet Gemma, there is a dead baby bird at her feet. One of her young students points at the dead bird and asks Gemma, “Why?” Gemma struggles to respond with care and honesty. “It’s nature,” she says. The student seems unimpressed. She responds, “It’s evil.”

Stanley Kubrick said that, “The most terrifying fact about the universe is not that it is hostile but that it is indifferent[.]” Humans have the distinction, perhaps, of being the only creature capable of inventing a myriad of indifferent universes with which to torment ourselves and each other. As Gemma and Tom feel more and more trapped in a world indifferent to their suffering, as they lose any hope of agency, the drama is not in the question of their escape but in the question of how they might refrain, in an indifferent universe, from becoming indifferent to each other.

Like Loading...
© Copyright 2020 By: Chris Kammerud
About Chris Kammerud
Chris Kammerud’s fiction and nonfiction has appeared in Bourbon Penn, Phantom Drift, Interfictions, and multiple times in Strange Horizons. He produces and co-hosts the short story discussion podcast Storyological. He is a graduate of the Clarion Science Fiction and Fantasy Writers’ Workshop, and he holds an MFA from the University of Mississippi, where he studied as a Grisham Fellow. He lives in London with his partner. You can find him online at @cuvols or www.chriskammerud.com.
No comments yet. Be the first!