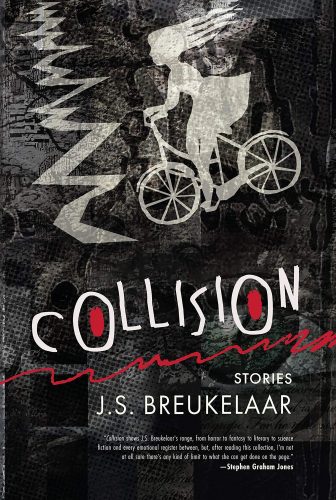 As its title suggests, J.S. Breukelaar’s short story collection, Collision, is indeed a collision of ideas, concepts, and themes. Unfortunately, most of those ideas don’t quite cohere to create something new or thought-provoking. But there are elements, however small they may be, that suggest something more interesting is lurking beneath the surface.

Breukelaar, who is based in Australia and whose previous works include the literary horror novels Aletheia and American Monster, begs comparisons in her latest collection to author Kelly Link, who has trafficked in the same weird fiction genre for the better part of two decades. But Breukelaar never quite settles down into a singular vision with her work, and her collection often feels like she has thrown everything at the wall to see what sticks. Loss and death, gender identity, and post-Trump politics are just some of the themes that make appearances in the collection, many told in weird fiction mode with a few SF pieces sprinkled in between. Even the brief author’s notes included after each selection, in which she explains her creative genesis, feel as if she is just exploring her own imaginative boundaries and seeing where they take her. Taken from that perspective, Collision could offer an interesting exploration of a writer’s creative growth, but given that this is my first experience with her work, such a reading is difficult at times to discern without any comparisons. The entire collection therefore could have been better edited with regard to what it wanted to say as a singular piece of work.

The most affecting story in the collection is its eponymous title. The premise involves a collision of multiverses which causes a cataclysmic disaster that redefines quantum reality. The story begins when its main character, Cassi, crashes into a bump in the road while bicycling across town to reach her brother, Isaac, at the local high school where Cassi teaches. Wacky things occur along the way as the two multiverses crash and leach into each other. Reality becomes warped and memory isn’t quite as certain or stable. Cassi must reach Isaac, whose transitioning is somehow related to the disaster, in time to save the universe, but doing so could end up changing her own life forever. The plot is fairly thin and its twist is telecast early on in the story, but it bounces on atmosphere and an interesting premise which questions how identity, gender, and memories shape and define reality.

Many of the stories unfortunately aren’t quite as successful in welding theme with their chosen genre. For instance, “Glow,” which tackles current American politics, tells the story of a family of aliens who have assimilated into American culture, complete with suburban lifestyles and interspecies marriages. An election is underway. A figure named Towers is rousing anti-alien sentiment, while aliens are being rounded up and taken to detention centers. The narrator of the story is mourning the loss of her sister who was swept up in the raids. “Glow” is clearly an analogy for a post-Trump era, but it is too on the nose for the analogy to be useful. Just in case you weren’t sure what the story was about, Breukelaar points it out in the very first paragraph: “Jeering voters wave placards, saying ‘Lock ‘em up!’” (p. 253). In the end, Breukelaar doesn’t offer any new insights on our current era or on a well-worn SF trope.

Where “Glow” is too straightforward, “Rogues Bay 3013” suffers from blending the weird and SF in a way that isn’t entirely successful. The most explicitly science fictional selection in the collection, “Rogues Bay 3013” involves androids, cyborgs, and angels in a tale about an injured soldier in a near-future war in interstellar space (the majority of the story however takes place on Earth). It’s to Breukelaar’s credit that these elements don’t feel too disparate—the angel is technologically enhanced—but the story’s worldbuilding only hints at its breadth. It introduces the intriguingly named “Aristotle’s Project,” scientific experimentations involving technologically augmenting test subjects, an interstellar war, and a rebellion, but only hints at these elements without fully delving into them. The story is much more concerned with the wounded soldier, his love for the technologically enhanced soldier who rescued him, and her brother, an angel who visits the soldier while he’s recuperating from his injuries. (In an author’s note, Breukelaar admits to this being her first stab at SF and the technobabble does feel overworked.) Despite its flaws, the story is still compelling for its glimpses into this interesting world.

In “Like Ripples on a Blank Shore,” the longest story in the collection, ideas about destiny and cause and effect are buried beneath a convoluted plot. Celia is a young woman who lives in a city overrun by Hosts, strange, not-quite-humans who are infected with an unnamed virus that causes them to leak bodily fluids. The Hosts are also clones, or so it seems. When a Host takes up space in the office where Celia works, she realizes he bears a strong resemblance to her former fiancé. He becomes a reminder of sorts of a past with which she is still grappling. At first glance, “Like Ripples on a Blank Shore” appears to be a commentary on anti-immigration discourse. Celia’s discomfort sharing a taxicab with a Host and leaflets that read, “A Good Host is a Dead Host” (p. 296) certainly leave that impression.

However, the story ultimately is about Celia’s healing after her failed wedding, which was aborted when her ugly wedding dress caused a freak ice storm in southern California, killing various members of the wedding party. Somehow, the weather mishap, the aborted wedding, and the arrival of the Hosts are all connected to Celia’s poor choice in wedding attire, her stand at being a strong woman as she faces marriage to a jerk, and a string of fear and bad luck that created “an infectious disease” (p. 308) that takes over the city. Before the story concludes, a hit-and-run involving her ex-fiancé and a Host is thrown in and Celia learns that the bad luck she and the entire city had been experiencing hadn’t been her fault at all. There are some interesting concepts here. The idea of the Hosts as a variation of zombies has a lot of promise, and the notion of bad luck caused by a horrendous wedding dress could have been an interesting fairy tale as well. Together, however, they feel muddled and disjointed.

At times Breukelaar leans heavily on stereotypes that are lazy, if not downright offensive. The first story in the collection, “Union Falls,” treats the disabled as saviors to the able-bodied. Delia, a bar owner whose house band auditions for a new member, becomes entranced by Ame, the armless woman who wins the coveted spot of keyboard player. Ame is hip and mysterious and her ways with the keyboard are indeed magic, drawing in audiences by the dozens to the bar and enthralling them with her off-key version of Kim Carnes’s “Bette Davis Eyes.” But Delia, who is grieving the loss of her husband and two sons in a car accident, is drawn to her in the only way such a character is allowed to function in such stories––as a means to draw out Delia’s grief and sadness. Once Ame has performed this function, she leaves town and Delia is given the strength to move on. I’m not sure where the weirdness comes in this story, unless the implication is that an armless keyboard player is inherently weird.

The story following it, “Raining Street,” also offers some odd characterizations, in this case, toward fat people. Rebel, the narrator of the story, describes her next-door neighbor as such: “There is a louche quality to Marie’s fleshiness that I find both repulsive and irresistible (the writer in me, Jules tenderly noted), allusions beneath the unkempt hausfrau drag, to a glamorously disrespectable (sic) past. I can’t help but think about her having sex even though she’s out of shape and possibly not very clean” (p. 57). In different hands, Rebel’s observation might play as a character flaw, but here it merely foreshadows Marie’s positioning as the villain of the story when it’s later revealed that she’s a witch who has been using black magic on Rebel. The characterization is quite frankly clichéd and questionable.

If the point of the collection is to be a collision of ideas, styles, and genres then I suppose Collision succeeds on that level. But, in the end, too many themes and ideas weigh it down, tied together only tenuously by genre and little else. The stereotyping of marginalized groups, mentioned above, leaves an odd taste in one’s mouth as well, especially as the author writes sympathetically about other groups made vulnerable in the current political climate. Overall, Collision feels like the work of a writer still struggling to find her voice. Given that her career is still early in its gestation, perhaps this is understandable, but Breukelaar would have been better served by a first collection that showed her at the height of her powers. Otherwise Collision offers some glimpses of creativity but not entirely enough.

Like Loading...
© Copyright 2019 By: Cynthia C. Scott
About Cynthia C. Scott
Cynthia C. Scott is a writer from the San Francisco Bay Area whose work has appeared in Glint Literary Journal, Copperfield Review, Flyleaf Journal, Graze Magazine, and Strange Horizons. She also writes reviews for Bookbrowse.com. She's currently working on a series of SF novels called The Book of Dreams.
No comments yet. Be the first!